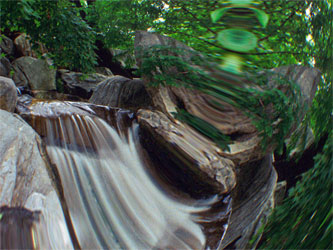 Many of the artists recently covered on Rhizome have shared an interest in spirituality, particularly as it intersects with mythology and ethos. Call it new media three-point-something, this sect of artists is also significantly prolific and a new show at Prato, Italy gallery Project Gentili surveys very recent work by a handful of the most interesting, including Maurizio Bianchi, Brody Condon, Deva Graf, Shane Hope, Xavi Hurtado, Michael Jones McKean, Dexter Sinister, Damon Zucconi, and AIDS-3D. Entitled "Pole Shift," the show alludes to a recent resurgence in New Age attitudes and interest in the metaphysical; particularly the conjecture that the earth might undergo an axial adjustment, causing a relocation of its poles. (Some worry warts link this prediction with the fear that an expiration in the Mayan calendar in the Gregorian year 2012 signals not only a pending geographic shake-up, but also an apocalypse.) Appropriately, many of the works in the show combine technology and a keen interest in systems with an end-of-an-era, eleventh-hour-type fervency sure to keep viewers on the tips of their toes. After its preview in Italy, the show will be reincarnated in nearly the same shape at Art-Forum Berlin, October 25-December 15. Assuming the world hasn't turned upside down by then, the show's worth adding to your art tour itinerary. - Marisa Olson