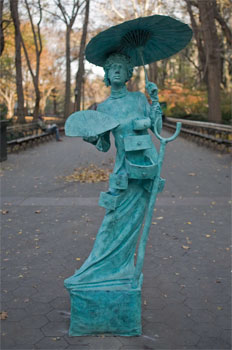 This coming Wednesday at The New School, German artist Christian Jankowski will give a talk on his career and work at 6:30pm in the Tishman Auditorium. (Students get in for free, so be sure to bring your student IDs!) Jankowski works in a variety of media, including video, installation, photography, performance, and sculpture, often engaging aspects of his personal life as his subject matter. In 1997, for a piece called Let's get physical/digital, Jankowski and his girlfriend Una, he in Stockholm and she in Milan, set up a chat room on the web where they met daily. These instant-message exchanges were then translated into German and Swedish, and given to seven pairs of actors, who played out the two roles in a series of vignettes that were videotaped, subtitled in English, and broadcast on the Web. Exhibiting the playful humor more typical of Jankowski’s pieces is Telemistica (1999), created for the 1999 Venice Biennale and now on view in the exhibition Broadcast at Pratt Manhattan Gallery. For this piece, the artist phoned Italian psychics on their live television shows and asked them questions about his artwork, such as how it would fare at the Biennale. Jankowski's stilted and awkward conversations with psychics in his non-native Italian jokingly mock artistic inspiration and success. Jankowski’s work is also currently on view at the Doris C. Freedman Plaza in Central Park, where a trio of life-sized, bronze figures, titled Living Sculptures: Caesar, Dali Woman, El Che are positioned just outside the Park’s entrance. The figures are modeled after three professional street performers the artist observed in Barcelona presenting themselves as the likenesses of Rome’s Caesar, the revolutionary leader Che Guevara, and a woman inspired by Salvador Dali’s figure known as “The Anthropomorphic Cabinet Woman.” At Central Park, the sculptures are placed in such a way as to suggest that an invisible triangle connects them; they seem to converse quietly with one another, making them less like static bronze statues and more lifelike and animated, similar to the street performers who often position themselves on the island across the street and pose as famous icons such as the Statue of Liberty.