Getting the Big Picture: Jon Kessler's 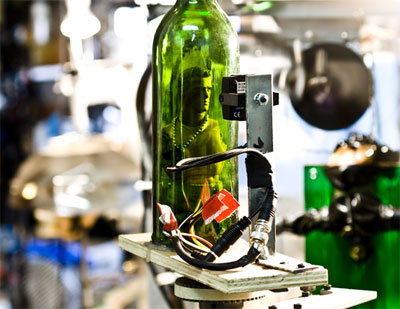 Jon Kessler and Thomas Hirschhorn are both known for large-scale installations that convert gallery spaces into environments laden with political commentary and consumerist critique as well as high tech/low-tech dichotomies. Their recent exhibitions are typically overloaded spectacles that nevertheless serve as indictments of the proverbial society of the spectacle. Kessler’s Circus could be seen as an Iraq-era Disasters of War achieved via Calder’s Circus. An army tent is pitched in the center of Deitch’s Grand St. space, book-ended by metal shelving that holds army beds and a series of TV monitors. The action takes place on the floor under the tent, as a cluster of mechanized contraptions put a variety of GI Joe and Ken dolls in constant jeopardy. One doll is dragged bottomless in a circle on the floor; another rocks back and forth slowly, his hands bound in front of him, against a backdrop of the sky pasted on a revolving drum; a green-faced soldier is bent over backwards and slathered with an oil-like liquid; a headless figure in fatigues and an “army” t-shirt has blood on his hands; four soldiers are placed upside down, guns at the ready. As in many of Kessler’s other recent works, each scenario is outfitted (embedded, if you will) with a mini-cam, making each setup a live-action loop that is broadcast on its own monitor. There’s also a hole in the tent for a large white balloon floating near the ceiling in the center, whose camera provides a bird’s eye view of the entire scene. 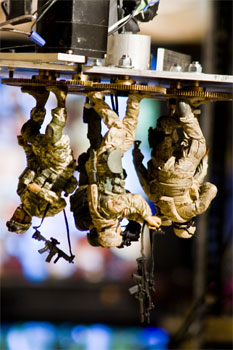 The close-ups and kineticism of the video images are much more attractive than the “real” things. With the videos, Kessler makes a canny observation about the coverage of the Iraq war on cable TV, pointing out the art direction that goes into the media’s version of it. One legless, blue-faced doll is throttling the camera continually, but all you see on the screen is his face in a jerky blur, suggesting combatants’ (or victims’) hostilities to the media that go unseen. The unrelenting motion of the installations and videos is an exaggeration of both the dynamics of warfare and the 24-hour news cycle, but perhaps only a slight exaggeration. That a war is also a video shoot may seem a cynical comment but its target is well founded in the media conglomerates’ opportunism.

Meanwhile, across town at Barbara Gladstone, Thomas Hirschhorn has constructed Universal Gym, an even more outsize, room-filling piece that combines real fitness equipment and simulated decor. Unlike Kessler’s nonstop barrage, Hirschhorn’s gym is in stasis. Everything seems to be taped down, or taped up, with packing tape, hinting at a kind of purgatory in which each object is either being prepared to be shipped out or is decisively bound to its current location. Coincidentally, there’s a large sphere in the center of this exhibition too (a disproportionate black-tape medicine ball), and almost as many video monitors as Kessler’s Circus, but there’s no live feed, only heart-rate graphs. The absence of CNN on the video monitors, as one might be expect to find at a regular gym, indicates a world whose inhabitants are uninterested in anything except their own heart rate. 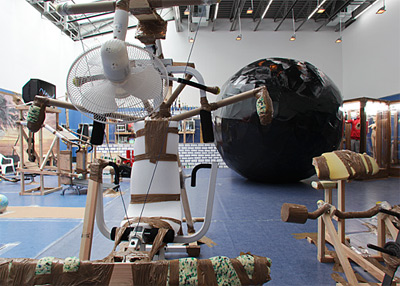 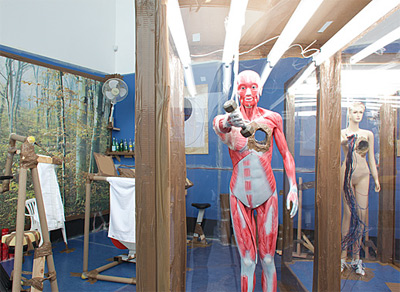 Adding to this commentary on indifference are four life-size manikins enclosed in glass cases, three of which are missing their heart (the gaping holes in their chests are filled with tape), but clutching a free weight, or a large jar of protein powder. The manikins wear Nikes, and there are empty Coke cans and Poland Spring bottles; abetted by Hirschhorn’s characteristic globes and a large-scale map of the world, the juxtaposition here is global corporate culture and the universality of the human body. A gym, though, is a stilted place to look for a microcosm; Hirschhorn will have a hard time convincing anyone that Western Civilization is in decline because people are spending too many hours pumping iron.

Alan Licht is a writer and an acclaimed musician. His career in music spans over two decades, and he's worked with a veritable who's who of the experimental world. Licht was also curator at the famed New York experimental music venue Tonic from 2000 until its closing in 2007, and has written extensively about the arts for the WIRE, Modern Painters, Art Review, Film Coment, Sight & Sound, Premiere, Purple, Village Voice, New York Sun, Time Out New York, and other publications. His first book, An Emotional Memoir of Martha Quinn, was published by Drag City Press in 2003; a new book, Sound Art: Beyond Music, Between Categories, the first extensive survey of the genre in English, was published by Rizzoli in fall 2007. The sound art exhibition he curated, Insideout, is currently on view at Laboratorio Arte Alameda in Mexico City through May 3rd.