A Trip to Governors Island: On "PLOT09: This World & Nearer Ones" 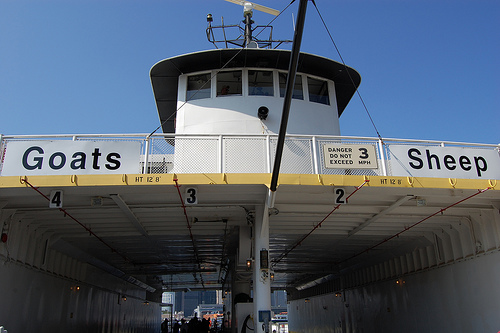 Adam Chodzko's video installation Echo tells an imagined story about the children of the military personnel who once occupied Governors Island. According to the film, the children often gathered in the basement of the Officer's Club, directly below the ballroom in which the film is screened, to play an invented game where participants attempted to shed their material possessions through trade. In opposition to a capitalist logic, objects of high value were swapped for ephemera. The fictional trades made in the film recall the seeming improbability of unequal transactions made in history, like the initial trade of Governors Island by Native Americans to Dutch settler Wouter van Twiller for two axe heads, a string of beads, and a handful of nails, and the 2003 sale of the island by the Federal Government to the people of New York State for one dollar.

On view in the Island's old movie theater is Brooklyn-based artists' collective The Bruce High Quality Foundation's Isle of the Dead. Satirizing its economic downturn, the film tells the story of a vanquished art world that has risen from the dead in zombie form to search for an alternative space, which turns out to be Governors Island. Upon crossing Buttermilk Channel, a zombified art world makes its way to the Island's movie theater, where it sings a heart-warming rendition of Bryan Adams' Summer of '69. The film follows recent buzz regarding the impact of the economic recession on the art market. Such a rich premise begs more detail, and unfortunately the narrative guiding Isle of the Dead felt a bit weak. 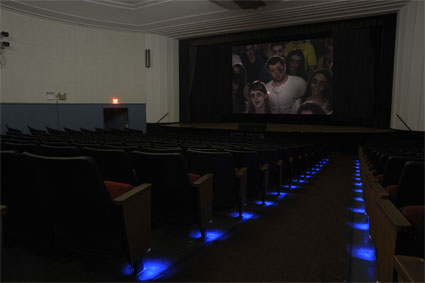 Other works responded to the history of certain structures located on Governors Island, such as Tue Greenfort's Project for the New American Century, positioned on the façade of a building within Brick Village, a cluster of former coast guard housing that will be demolished during the upcoming redevelopment of the island. The artist emblazoned a worn-looking logo for the neoconservative think tank “Project for the New American Century” on the building using letters constructed from materials found inside. The sense of abandonment surrounding Brick Village’s empty buildings, rusty swing set, and overgrown greenery contrasts uncomfortably with markers of the Project’s zealous, imperialistic ideology, including a sign that displays its mission statement of sorts, penned by William Kristol, which appears on the homepage of the Project’s website. The work also raises questions about the process of demolition and preservation, especially as it pertains to the formation of historical narrative; each time bits and pieces of the Island’s architectural landscape are erased, its history becomes rewritten for its visitors.

Overall the first PLOT was highly successful, particularly in its ability to engage the island in such inventive, intimate ways, and hopefully those to come will be staged in locations as unique and powerful as Governors Island. 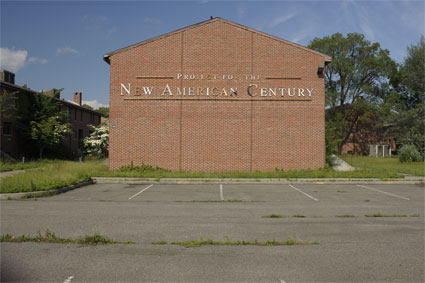