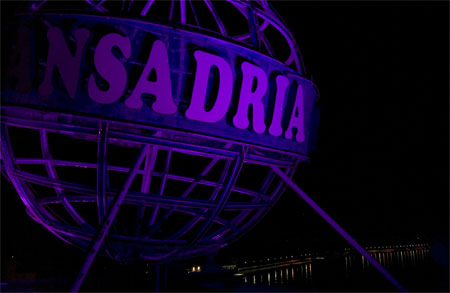 How did you get involved with the Quadrilateral Biennial?

I did a lecture tour in Slovenia and Croatia during the summer of 2008, and one of the stops was the Museum of Modern and Contemporary Art in Rijeka. Dan Oki, an artist with whom I had worked before, had introduced me to the museum curators. This ultimately led to the offer to oversee the Biennial as artistic director, together with the four curators I invited—Darko Fritz (Croatia); Nina Czegledy (Hungary); Elena Giulia Rossi (Italy); and Peter Tomaz Dobrila (Slovenia). 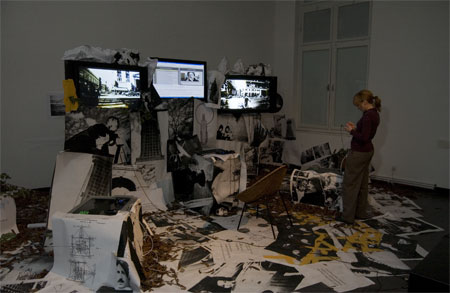 Works will be on display at the MMSU and at several other Rijeka venues, where they will be integrated into urban space. How were these other sites selected? How will these locations interact with the art itself?

Four projects in the exhibition are exhibited offsite or have an offsite component. In the case of Dalibor Martinis' Global Picture / Sensor of Human Condition the choice of site and integration into urban space happened quite naturally. Martinis' project uses the 3D logo of the Transadria company, a big globe sitting on top of a building in the harbor of Rijeka (5 minutes from the museum), which he equipped with LEDs. The globe changes its color according to the "global mood," which is determined by gathering daily data on the global economy, international relations, ecology, etc. and filtering this data to assess the state of "humanity" at any given moment. Museum visitors can browse through the project website and data in the gallery space. Ivan Marusic Klif's Telephoning 2 consists of a "stage" in the museum space and software that automatically dials the numbers of public phone booths around the country. The public spaces of the gallery and the city interact with each other when museum visitors talk to people who pick up the phone in the public booths. Other offsite spaces were chosen to enhance cooperation with organizations and venues in Rijeka. Carlo Zanni's cinematic project My Temporary Visiting Position from the Sunset Terrace Bar is screened at the Astronomical Center, located on top of a hill with a perfect view of the city—a site that resonates with the viewing position assumed in the project itself. Lorenzo Pizzanelli's work Marinetti alla Quarta, which reconstructs Filippo Tommaso Marinetti, the founder of Futurism, as a chatbot, is shown at the Peek&Poke Retro Computer Club, which is a beautiful small space collecting old computers, calculators, and other media relics. Marinetti is represented as a virtual portrait embedded in a valise sitting on top of a pedestal, and both the project's form and its references to Futurism's celebration of technology as cultural factor make the venue a natural habitat for the work. 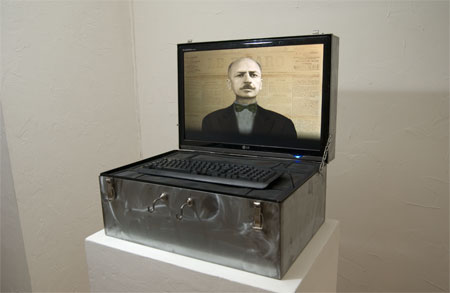 Four countries - Croatia, Slovenia, Hungary, and Italy - participate in the Quadrilateral Biennial. Do any of the projects included in the Biennial speak directly to the national relations between these countries? How do those projects engage the notion of a "cultural exchange"?

I wouldn't say that any of the projects explicitly comment on the national relations between the four countries of the Quadrilaterale, a cooperation formed in 2000 and aimed at bringing together countries in the same geopolitical and interest area and integrating them into "Euro-Atlantic structures." However, this was one of the issues we, the curators, tried to address in the concept for the show. We immediately saw a tension between the networking, connectivity, and interrelations enabled by new media and digital technologies and the inherent "national" premise of the Biennial. The qualities of new media are inherently multilateral (rather than quadrilateral) and tend to transcend traditional boundaries of nation states. On the other hand, one cannot deny that artistic practice is embedded in culturally specific contexts, and dependent on a local and national framework of institutions and organizations. We wanted to raise questions about the media-enabled crossovers that occur between and beyond notions of national relations. One could argue that the fact that projects from the four countries of the Quadrilaterale explore these issues constitutes a form of cultural exchange.

The Biennale proposes to "explore the different angles and intersections that emerge from the connective qualities of new media in relation to specific political, economical, and cultural contexts." I'm wondering if you could talk more about what is meant by the term "intersection" - as well as what intersections you hope to see come into place through the exhibition.

We chose the theme of "angles and intersections" for the Biennial since we wanted to explore the connections emerging from the quadrilateral (a mathematical construct) and the multilateral nature of new media. The works in the exhibition capture a number of intersections: between different media (such as cinema, photography, performance); between locations, time zones, the physical and the virtual world; between local and personal histories and politics; and natural and technological space.

A group of interactive or real-time videos (by Júlia Vécsei, Marko Kosnik, Helena Bulaja, and Carlo Zanni), for example, illustrates how digital technologies have affected the language of the moving image and creates crossovers between the cinematic, computational, and photographic. There also are connections between local personalities and histories that run through the projects. One of Eva and Franco Mattes' Synthetic Performances reenacts Marina Abramovic's and Ulay's famous 1977 performance Imponderabilia in the virtual world of Second Life. Abramovic, who was born in Belgrade, herself appears as a commentator in Helena Bulaja's interactive documentary, which captures the history of technological and social developments initiated by the inventor and electrical engineer Nikola Tesla (an ethnic Serb born in the territory of today's Croatia), an influential figure in the history of new media. Like Tesla, whose work contributed to the establishment of robotics, Marinetti—the focus of Pizzanelli's project—is credited in the robotics context for the humanoid automatons that appeared in his play La donna è mobile (and its later version Elettricità sessuale). There are many layers of intersections that emerge from the artworks and they hopefully provide an aesthetic reflection on the relationships between national alliances, geopolitical areas, globalization and artistic practice.