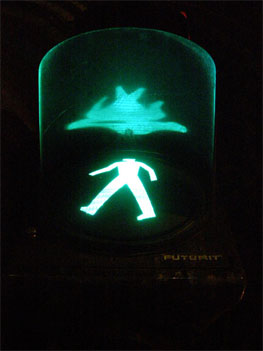 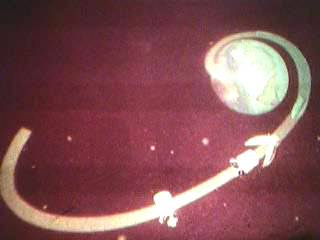 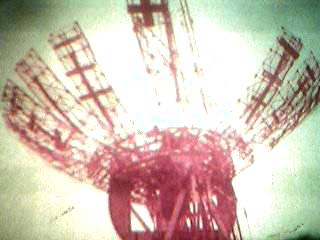 Belgrade had a small but active demoscene in the 1990s, which gave rise to one of the most interesting art collectives in the former Yugoslavia, Kosmoplovci (pronounced “kos-mo-PLOV-tsee”). The name means something like astronauts or space sailors, and comes from a 1970s do-it-yourself science and technology magazine that some demoscene friends found at a flea market in the early ‘90s. The members of Kosmoplovci are fond of rummaging through the past, and their varied output—which includes internet works, videos, music, comics, and books—usually involves allusion and found media. Satelitska Stanica is based on an old 8mm film extolling a joint project with Japan to build a satellite station in a remote Yugoslavian province; the reel was salvaged at a flea market and transferred to digital devices with minimal interference. Marko Kraljevic, the Turk-fighting hero of Serbian epics, appears in previews of 2D and 3D video games that Kosmoplovci will probably never make. Self-aware makes public footage from a broken webcam, primarily the bewildered faces of the camera’s owner and repairman in the shop.

Recycling material follows from Kosmoplovci’s structure, where the four or five core members regularly bring in a dozen or more “temporary” Kosmoplovci, who specialize in specific media or channels of distribution (Aleksandar Opacic, for example, has a ragged, layered style of drawing that defines Kosmoplovci’s comics). All their videos can be freely downloaded, or have distinct online versions, while paper publications often get passed around to friends. Their distribution systems put them outside markets and conservative institutional systems; and while Igor, the collective’s de facto leader, said he does tech support for cultural institutions in Serbia, which helps the group maintain a link to the establishment, he spends just as much time on web sites for his drum-and-bass DJ friends.

A couple of weeks before going to Belgrade I wrote to Nikola Tosic—who specializes in posters and spare prose pieces—with a request to meet and chat, and in a gesture of Balkan hospitality he replied with an invitation to stay at his place for the duration of my visit. Tosic lives on the outskirts of Belgrade, fitting for an artist who was active with Neen but keeps his distance from the local scene. His artworks, which he tosses off when he’s not working as a designer or training for triathlons, are deliberately marginal. A thank-you note to the internet’s creator and a description of the human species intended for aliens have clumsy graphics and a plain but quirky usage of English, which gives them the poignancy of stories by a precocious child. Tosic also organizes ephemeral events, like Meet in a Nice Restaurant, a networking-as-art gathering that has happened in Milan, Istanbul, and Transylvania. His current pet project is Triathlon Team, which involves hosting and designing blogs for his favorite triathletes. The idea of designating a team for a purely solitary sport, and trying to make humble triathletes the subject of media attention, has the same dry, barely-there humor as his cartoonish pieces.

Carving art up by nations is always fraught with missteps. Geographic proximity makes it tempting to draw similarities between Kosmoplovci and Tosic, though their paths haven’t crossed in years and they have never collaborated. They have stronger analogues with DIY scenes and Neen, respectively, than anything in their neighborhood. Still, local conditions—namely, the absence of an institutional peer network—has an affect on their choices; no one is telling them they shouldn’t make art about triathlons or drum-and-bass. “Belgrade’s lack of a real new media lab or institute makes it more free,” said Ciric, the curator. “Because when new media works are produced they are a result of the pure individual creativity.”

Editor's Note: Nikola Tosic took issue with his representation in this piece. Please see comment thread below for his view and a correction.