Art In Your Pocket: iPhone and iPod Touch App Art 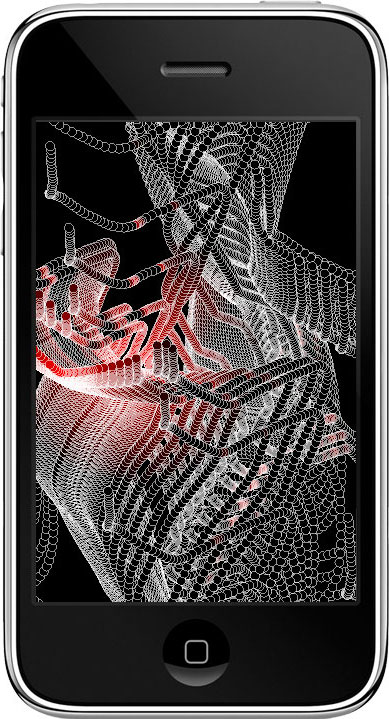 As the niche genre of software art expands beyond the web and into mobile devices, media artists are finding ways to integrate their work into a new form of business model. Instead of giving away your work for free on the web, Apple's iPhone and iTouch devices provide an ample platform for distribution (through the Apple App Store) and hardware support for novel ways to experience screen-based work. Since the App Store was unveiled last year, the over 30,000 available applications have taken the form of everything from mock cigarette lighters (Zippo's App) to mobile flutes (Ocarina) to utilitarian apps such as Urban Spoon (Restaurant finder) to social networking in physical spaces (Loopt). Noticing this trend, media artists who once found their free and limitless distribution platform through a desktop computer browser are now turning their attention and creative efforts toward the mobile space of the iPhone.

Noticing this shifting dynamic toward the mobile space, early pioneering web and software artist Lia began the website, iPhoneart.org, which aims to aggregate several artist-created applications that use the touch-screen and accelerometer functions of the devices in new and imaginative ways. Like her web-based work from the late 1990s, Lia's PhiLia 01 is an iPhone and iTouch application that integrates sound and simple motion graphics that the user can influence through touch and orientation of the device to create unique audio-visual compositions. Steph Thirion is another artist working in the abstract art realm of iPhone sound art. His application Eliss is both an innovative game and music creation app that features an odd array of geometric shapes or "blendable planets" that the users have to manipulate to "fit" together. This abstraction is reminiscent of 80s arcade games graphics and adds a nice alternative retro look to the iPhone's slick GUI operating system. 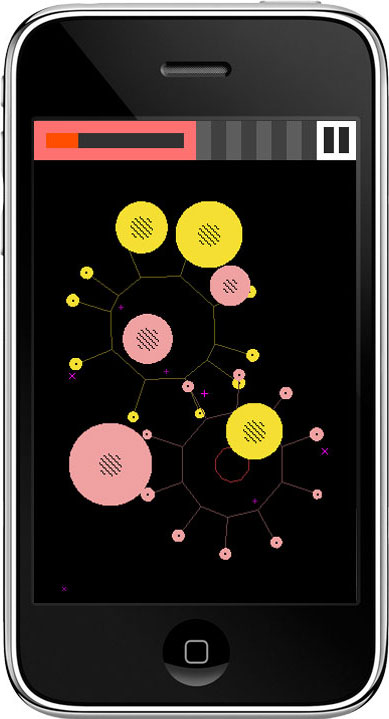 Within the genre of apps that pay homage to artistic practice of the past, is a collaboration between media artists Memo Akten and Miltos Manetas (who is well known for his paintings of outdated computer tech such as Zip drives) entitled Jackson Pollock. This multi-touch app allows "painters" to choose their colors and "drip" on the device's screen in a similar aesthetic to Jackson Pollock's drip paintings. This dripping aesthetic is also evident in Theo Watson's app, FATTAG, which is a handheld version of the software used by the Graffiti Research Lab on their building size LaserTAG projections. The app allows you to sketch graffiti on the screen with your fingers, while virtual "paint" drips from each line drawn. 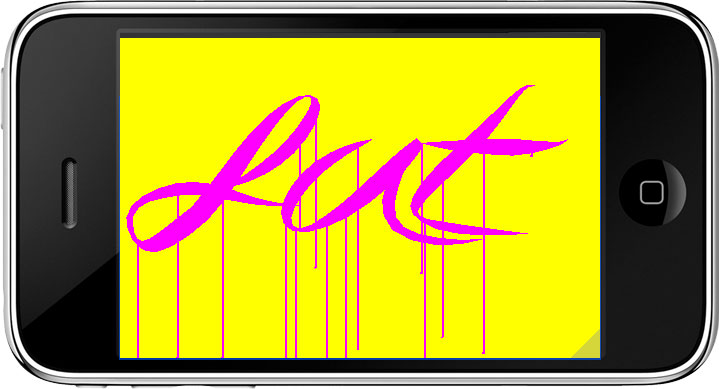 Working with abstract text compositions is artist Andreas Müller and Nanika's For All Seasons a free iPhone app that integrates several poetry pieces with data visualizations of this text. In this app, users first choose a season from "Winter, Autumn, Summer, and Spring" which then prompts a piece of text to appear onscreen that can be manipulated through touching the screen. This piece was originally made in 2005 for the computer desktop and the artists have adapted it for the iPhone in order to gain familiarity with iPhone programming. "Spring" features some prose about Dandelion flowers and changes into some blooming stalks of the flowers on a white 3D plain. Aya Karpinska's Shadows Never Sleep also works within the world of interactive narrative and visual output on the iPhone. The application features a zoom-able fiction piece that takes advantage of the device's multi-touch capabilities. Users continuously zoom into the black and white images to reveal a story in both text and illustration as they move through the landscape. 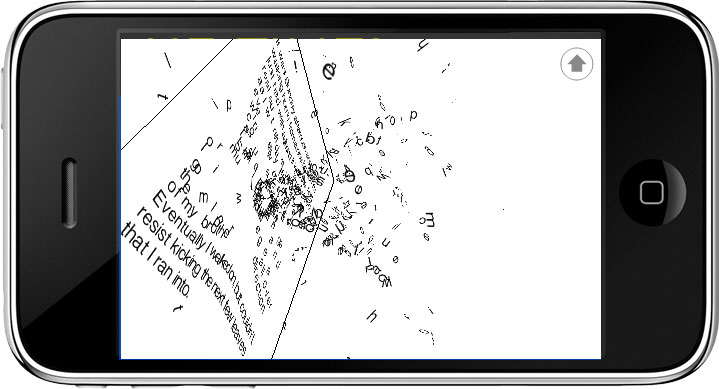 Image: Andreas Müller and Nanika, For All Seasons, 2009

Moving away from narrative design and delving deeper into abstract visual and sound compositions is SynthPond built with Open Frameworks (a C++ library) by NYC-based artist, Zach Gage. Although Gage professes the app as more of a "sound toy" (inspired by the work of Japanese artist Toshio Iwai) than a game or poetic experience, the project uses the simple premise of adding nodes to a field, where rings of color emanate from each placed object. When the rings hit other objects they create sounds, which then add to the overall composition. This form of fluid composition is something that works seamlessly on the iPhone since it requires no learning curve and is accessible and understandable by most users. 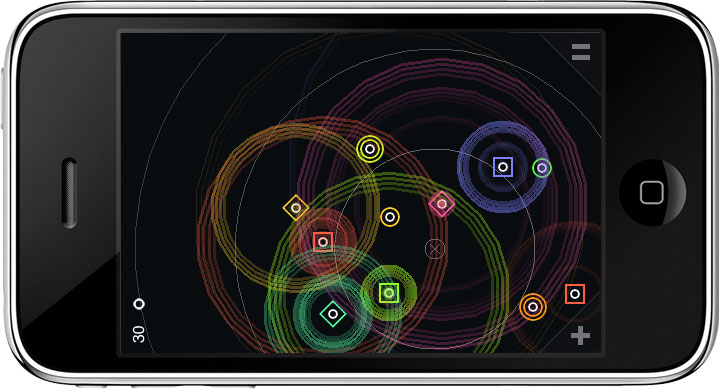 Integrating software systems and rules into his iPhone art creations, world-renowned web and software artist Joshua Davishas created the JD Reflect app. This app is a generative imaging system that uses both graphical elements and color swatches to create kaleidoscopic effects from randomized processes initiated in software by the artist. The idea of the app is to enable the generative creation of limitless final designs using an algorithm to dictate the output. Thus, the resulting creations are unique for each user of the app. 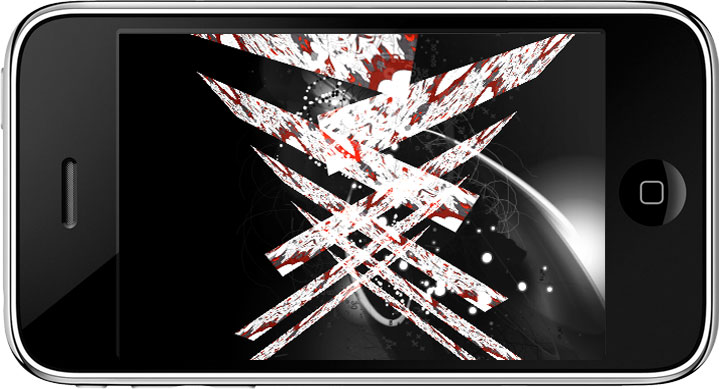 Reality Jockey’s RjDj app also uses the iPhone as a generative sound system. The app is ambient music composition application that uses the built-in microphone of your iPhone to capture ambient sound throughout your day and create sound pieces that can be uploaded for free to the RjDj server and given a URL that your friends can use to find your live recordings. It can be thought of as a live audio blog application that uses microphone data and accelerometer data to create a dynamic sound piece. This form of real-time data acquisition with uploading capabilities to the web is increasing the iPhone's ability to become a mobile diary of sorts, where artists can use elements from the user's immediate environment to channel inputs into their work. 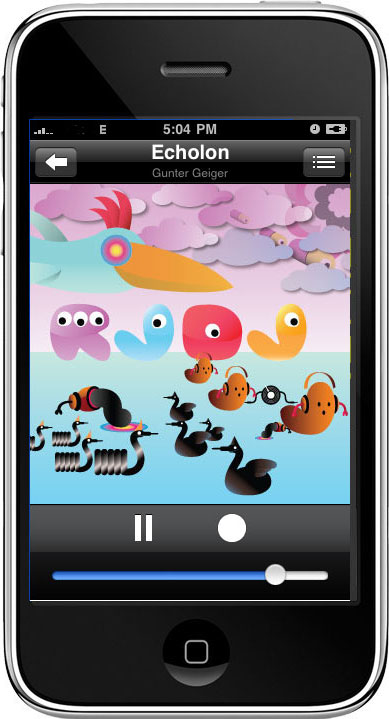 Since the iPhone has the ability to detect its own movement, listen to surrounding environments, know when it is being touched, and connect to the Internet, it provides a plethora of opportunities to engage with these sensing capabilities. Meshing the real world and digital gaming is Audible Realities, an artist collective who have developed several artistic and fun apps. Their ultra-creative World 9 application delves into the world of 8-bit arcade games by meshing this old school gaming environment with the real world. Simple, yet effective, the app merely connects the iPhone's accelerometer data to the sound of Mario from Nintendo's Super Mario Brothers’ jump sound. So as the user physically jumps up and down, it triggers the jump sound from the game. The app also networks this jumping movement to other "players" around the globe and features a built-in map to see where others are jumping. This is similar to the Ocarina app's built in map to see where and what others around the planet are playing on their iPhone flutes. 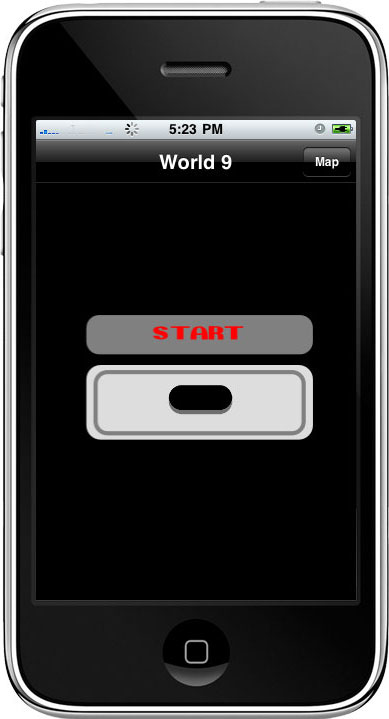 Although the apps mentioned in this article simply scratch the surface of the multitudes of projects that artists are creating for these devices, they demonstrate the endless possibilities they engender. By writing code that utilizes the sensing capabilities of these devices such as their immediate location, orientation, ambient noise levels, and more, there are even more possibilities to harness these elements into inventive and clever visual and auditory output. Since Apple has kept the economic barriers for entry into this world of mobile development relatively low, it's easier than ever for artists to use these devices for their creations and have an instant audience of millions to enjoy them. Whether you are looking to expand your artistic career or simply push the boundaries of these devices, the iPhone is a unique platform for experimentation and play for media artists to engage with audiences around the world.

Jonah Brucker-Cohen is a researcher, artist, and Ph.D. candidate as an HEA MMRP (Multimedia Research Programme) fellow in the Disruptive Design Team of the Networking and Telecommunications Research Group (NTRG), Trinity College Dublin. He is an adjunct assistant professor of communications at NYU's Interactive Telecommunications Program (ITP). He is co-founder of the Dublin Art and Technology Association (DATA Group) and a recipient of the ARANEUM Prize sponsored by the Spanish Ministry of Art, Science and Technology and Fundacion ARCO. His writing has appeared in numerous international publications including WIRED Magazine, Make Magazine, Rhizome.org, and Gizmodo, and his work has been shown at events such as DEAF (03,04), Art Futura (04), SIGGRAPH (00,05), UBICOMP (02,03,04), CHI (04,06) Transmediale (02,04,08), NIME (07), ISEA (02,04,06), Institute of Contemporary Art in London (04), Whitney Museum of American Art's ArtPort (03), Ars Electronica (02,04,08), Chelsea Art Museum, ZKM Museum of Contemporary Art (04-5),Museum of Modern Art (MOMA - NYC)(2008), and the San Francisco Museum of Modern Art (SFMOMA) (2008). He blogs at coin-operated.