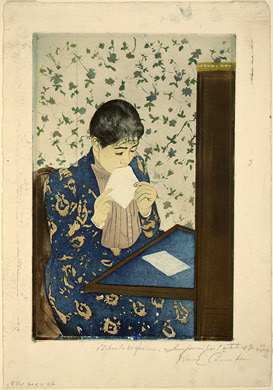 The imposing yet organic form of Frank Lloyd Wright's rotunda (himself greatly influenced by Eastern forms and philosophies) is dominated by a site-specific piece, human carriage by Anne Hamilton. This Rube Goldberg-like system of a monorail, pulleys, and counter weights transports texts from the top of the museum's ramp down to a pile on the museum floor. As a central element in the exhibition (the movement of these texts is marked aurally by a Tibetan bell -- providing a meditative soundtrack to the entire exhibition) human carriage serves to remind us throughout, how information is selected, translated, recontextualized, and transmitted through cultures.

The show is arranged into loosely chronological and provocative themes. Aestheticism and Japan and Landscapes of the Mind trace the evolution of Eastern influence from a formal one to a more philosophical one in the late 19th and early 20th centuries. From a media perspective, one of the most interesting of these thematic groupings is titled Buddhism and the Neo-Avant-Garde -- a cross section of counter-cultural artistic movements in America. The transnational group of artists known as Fluxus are introduced to us through a provocative wall text highlighting a quote from the 1963 Fluxus Manifesto (written by George Maciunas) that urges artists to "Purge the World from Europeanism." As evidenced by the remarkable collection of materials on view here, however, it appears that this movement was far more a blending of East and West, than any sort of decisive purging.

John Cage's presence is felt throughout "The Third Mind" and naturally he looms large in the Fluxus gallery. Many of Cage's scores are on view, and none are as arresting as the large-scale score for Water Music (1952). A classic example of his poetic notational system, Water Music includes the instruction to "duck whistle in Bowl of Water (as long as breath holds, but not longer past 52.5)." Cage appears in the work of others as well. In the video sculpture Duchampiana Video Chess by Shikego Kubota, we witness Cage lock heads with another major avant-garde influence -- Marcel Duchamp. Although tucked away in a small corner of the gallery, this document of the infamous chess match and concert (the chess board was wired for sound) organized by Kubota in 1968 is an absolute gem within the show. Other works, notably Cage in Cage in Cage (a video by Paik, featuring Cage, placed within an antique birdcage) by Kubota's husband Nam June Paik, also exemplifies and plays with Cage's tremendous influence. But far from the oppositional stance iterated by the Fluxus Manifesto quote, perhaps another quote included in the wall text alongside Paik's sublime film Zen for Film (film leader projecting nothing but the scratches and dust that accrue over time) expresses the spirit of Fluxus more accurately: "I am not a follower of Zen but I react to Zen the same way as I react to Johann Sebastian Bach."

Another "neo-avant-garde" movement recontextualized in "The Third Mind" is the beloved group of eccentrics known as The Beats. Drawing extensively from a variety of Buddhist and Hindu texts the collection of ephemera on display by these writers is an inspired inclusion into this history of visual art. The ephemeral includes a manuscript of Jack Kerouac's Dharma Bums and a number of Kerouac drawings, photographs by Allen Ginsburg, a copy of The Psychedelic Experience: A Manual based on the Tibetan Book of the Dead by Timothy Leary, the "cut-up" text by William S. Burroughs and Brion Gysin which gives the show its name, and a beautiful selection of audio recordings by the poet Gary Snyder (available online). These artists influenced by Eastern philosophies-to varying degrees and varying levels of complexity-themselves inspired an entire generation of Americans and left an indelible mark on American culture. 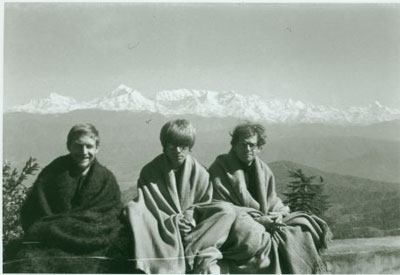 Influenced by a consciousness that grew out of The Beats, a group of artists in California including Tom Marioni, Terri Fox and Paul Kos (whose work Sound of Ice Melting is also on view in the Museum's rotunda), recognized that their geography isolated them from the art world of New York and Western Europe. As such, their unique forms of performance and conceptual art more aligned to Eastern philosophies than Eurocentric histories of art. Twenty-some years before Rikrit Tiravanija cooked Thai food in a gallery and called it art, Tom Marioni had invited people to his "Museum of Conceptual Art" -- titling this social act and what remained The Act of Drinking Beer with Friends is the Highest Form of Art (original from 1970). The beer bottle remains are on display here as a sculptural object, but the piece as a performative and participatory act was recently restaged as part of SFMOMA’s Art of Participation exhibition.

Tom Marioni, FREE BEER (The Act of Drinking Beer with Friends Is the Highest Form of Art), 1970-79
(Installation view at SFMOMA)

The list of standouts in "The Third Mind," media based or otherwise, is long, but one of the most remarkable, both in terms of scale and context is the spectacular tonal investigation, Dream House by Lamonte Young and Marian Zazeela. As part of the thematic grouping titled Ecstatic Minimalism this indescribable audio and light installation is set alongside major minimalist works by Ad Reinhardt, Agnes Martin, Carl Andre and Dan Flavin. Widely known and highly influential in underground art and music scenes, installed here, Dream House is given a gravitas and platform that is at first sight incongruous but once you sit down and experience the environment its pulse and drone seems completely natural in this institutional setting. In return, Ad Reinhardt and Dan Flavin's cerebral forms of minimalism don't exist solely as part of the 'long formal march' through art history, but rather part of a larger spiritual and aesthetic zeitgeist.

It is this careful curatorial thought that truly makes "The Third Mind" a stand out among the tired genre of the institutional group show. Although highly historical, the works that we have been exhibited many times before feel completely fresh, and those that we have never seen are perfectly at home in this narrative. From a curatorial perspective, however, there is a huge elephant in the room, and that is Edward Said. In 1978 Said wrote the polemic text Orientalism that contended that European concepts of "the Orient" were rooted in highly repressive power structures. The book itself is highly controversial, with many contending that Said over simplifies the dynamic, but regardless of dissent, Orientalism has remained a central text in post-colonial studies. To not acknowledge that some of the forms cultural appropriation exhibited here could be seen as slightly paternalistic, or at best naïve, opens the door to some uncomfortable questions. And while Munroe's texts do allude to some of these questionable adoptions of Eastern philosophies, her seemingly deliberate decision to not address the book directly feels slightly awkward. The notion of "contemplation" is further problematized by the presence of so many Asian born and Asian American artists, whose engagement with their own culture should surely be seen in a different light than those coming from Judeo-Christian backgrounds. Also somewhat problematic is the near total exclusion of Islam. In addition to feeling out of step with any contemporary reality, to limit a discussion of Asia to "the Orient" seems to defeat the show's purpose of plural narratives.

But regardless of these contentious issues, "The Third Mind" is a refreshing break from the dominant narrative of Art History. By taking a strong and decisive curatorial stance, Alexandra Munroe has created something thought-provoking and highly original. And for those of us well aware of how dominant narratives exclude vast swathes of artistic production, the range of mediums, gender diversity and thoughtful thematics offer a welcome change from the usual.

"The Third Mind" is on view at the Guggenheim through April 19th, 2009, and it is accompanied by an exceptional series of ongoing events and performances.

Currently a freelance curator and researcher, and also a writer for Rhizome, Caitlin Jones was formerly the Director of Programming at the Bryce Wolkowitz Gallery in New York, NY. Prior to this, Jones held a combined curatorial and conservation position at the Solomon R. Guggenheim Museum. At the Guggenheim, she co-curated the groundbreaking exhibition "Seeing Double: Emulation in Theory and Practice" and coordinated the Deutsche Guggenheim exhibition, "Nam June Paik: Global Groove 2004." As a key member of the Variable Media Network, Caitlin has also been responsible for developing important tools and policy for the preservation of electronic and ephemeral artworks. In addition to her work for Rhizome, her writings have appeared in a wide range of exhibition catalogs, periodicals and other international publications.