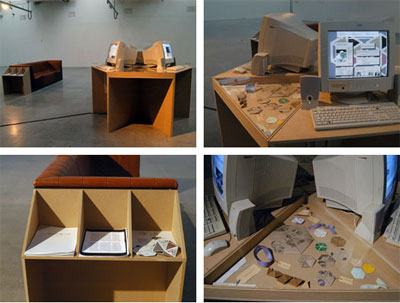 The hexaflexagon is a strip of paper, that has been folded into a hexagon. This two dimensional shape can then be turned inside out, flexed, so that a number of faces that were previously hidden will appear. In theory, it can have an infinite number of faces, although in reality, the thickness of the paper sets the limit. It was discovered 1939 by a British fellowship student at Princeton, who started to fold the strips he had just trimmed off his American "letter-size" sheets to fit his A4 binder. It had a revival in the late 50s, when it first became popular among magic buffs in New York, and after an article in Scientific American, it became something of a craze.

To investigate which connections that can be made between the ideas and the people associated with the hexaflexagon, I use the digital network Myspace as my tool. A some-what old fashioned and analog phenomenon is applied to something very contemporary and digital. Right now, HEXA_FLEXAGON_F_EVER is trying to become friends with Alan Turing, Lewis Carroll and Katherine Hayles. It’s an exponentially growing mapping, where more dimensions will uncover, for an unforeseeable future.