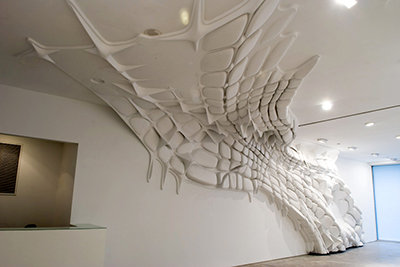 Several years ago, while making the lecture circuit rounds, American architect William Massie described a key goal within his practice as moving towards a more direct translation between bits and atoms. Architecture has always thrived on the tension between representation and material assemblages and what he was addressing with this comment was the dawning of an era characterized by a new proximity between digital models and physical output. In selected contexts, artists, architects, and designers have been exploring these accelerated development cycles for a decade but the involved technologies are descending in price so quickly that, for example, 3D printers are now cheaper than laser printers were in 1985. A key question: how does the looming ubiquity of these tools and workflows apply to the production and display of new media art? This article will explore digital fabrication (aka fabbing) at a variety of scales which include the curatorial questions raised by these new hybrid industrial design/sculpture objects as well as the implications on the practice of individual artists. Before delving into either of these milieus it would be useful to acknowledge some common language and terminology associated with fabrication and recognize some important precedents.

Wikipedia defines rapid prototyping as the "automatic construction of physical objects using solid freeform fabrication." Solid freeform fabrication is an umbrella term for a range of (often proprietary) techniques which include extrusion, sintering, curing and printing. So when we use the term "rapid prototyping" we are referring to some variant of the aforementioned 3D desktop printer. Another important process to consider is Computer Numerical Control (CNC) in which a geometrical form, as defined by a 2D or 3D CAD drawing, is translated into a tool path and cut out of an existing object or laminate. Common forms of CNC include milling and laser cutting. CNC is not new, one need only venture to their nearest signage shop to prove this point, but, like 3D printing, CNC technologies are going through a process of rapid miniaturization and are becoming affordable to individuals outside industry.

Let's be clear, the fundamentals driving many of the processes on the above laundry list of production techniques are old hat in sculpture. What is noteworthy is that these methods (complex mold making, subtractive techniques, etc.) are becoming less esoteric, increasing in precision and affordability and, in certain instances, being developed with an open source mandate. A great example of where homebrew fabrication could be headed (at least for the microcontroller savvy) is the RepRap project. 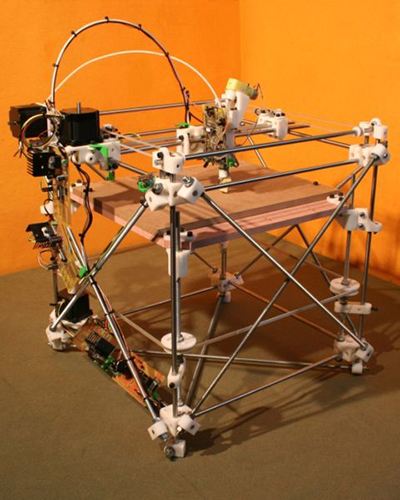 Launched in 2004, RepRap aspires to deliver a "self replicating rapid prototyper" which can reproduce many of its own parts. Originally proposed and developed by Adrian Bowyer, RepRap is now being researched and refined by a team of globally distributed collaborators. The one-sheet for the project reads like a call to arms for personal manufacturing and points out that (almost) everyone in the developed world "...runs their own printing works, their own photographic laboratory, and their own CD-pressing plant. Moving from two-dimensions to three, why shouldn't they make their own MP3-players, their own coat hooks, and their own car wing mirrors?" Rob Myers reblogged the original RepRap news coverage on Rhizome in June 2005 and wisely added "Now make art with it." While this endeavor represents a "blue sky" means of desktop-production, and becomes more plausible and technically proficient by the month, an entire generation of artists and designers are already exploring more conventional means of fabrication and CNC. The easiest way to get a sense of the range of work being done is to scan a few shows from the last year and then ponder the ramifications for artists and curators.


The 2008 edition of "C.STEM" was described with the genetics-meets-design tagline of "breeding objects". The show was decidedly multidisciplinary and brought together a range of work which included Ammar Eloueini's CoReFab#116 , Ebru Kurbak and Mahir Yavuz's News Knitter, IVY by MOS, the aforementioned RepRap project and many others. In essence, the show was a celebration of process and the artifacts on display were augmented with video, models, diagrams and even props to help situate them in the natural environments in which they might be encountered. The exhibition statement described contemporary praxis as usurping the mass produced "all-of-a kind object" with "families of unique and one-time products" characterized by parametricism and driven by flexible, generative systems. The motley crue of participants were assembled under the umbrella title of "post industrial designers," a terminology that suggested a reexamination of craft with a nod towards the critical theory crowd. 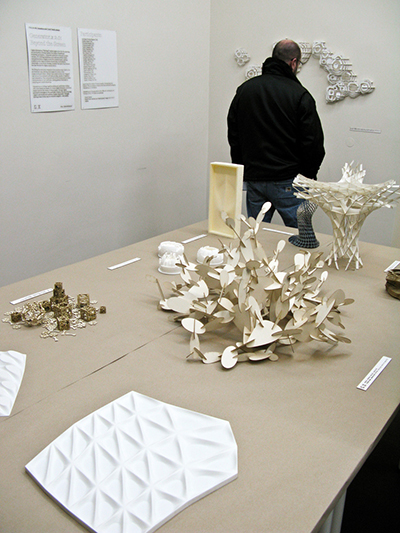 2008 also marked the launch of "Generator.x 2.0: Beyond the Screen," an expansion of Marius Watz's generative art curatorial platform to explore algorithmic design within the arena of digital fabrication. Organized as a workshop and subsequent exhibition at [DAM] Berlin (as part of Club Transmediale 2008), the initiative showcased a range of experimental prototypes, many of which were produced in a charrette environment. Work featured included Theverymany's Aperiodic_Vertebrae, Jared Tarbell's Spheroids and Cubes, David Dessen's Foldable Fractal, Watz's Object 1-3 and about a dozen other projects. When asked about the goals of this new iteration of "Generator.x" Watz is quick to identify a desire to dispel the myth that generative art is simply the production of "screensavers". He continues, "digital fabrication allows for a software-based approach to physical production, meaning that computational processes can be used in all parts of the production. It's an ironic reversal of the last decade's transition towards the digital." Read in this light, exhibitions like "Beyond the Screen" and "C.STEM - Breeding Objects" represent a convergence of code and craft, whereby experiments in geometry and data manipulation are considered as the basis for systems of assembly and material expression.

In her 2009 predictions for The L Magazine, Paddy Johnson cynically labeled 3D printing the "new Photoshop." Johnson forecasted a "remarkably bad but ultimately short lived art-making fad exploring little more than what the technology does." While dismissive, Johnson's caution is not entirely unwarranted as a 1:1 translation of technocratic architecture school machinations into gallery space will not appeal to a wide audience. However, these tools and workflows are only going to become more predominant in all arenas of production, artistic or otherwise - perhaps what we'll see is an initial manic investigation of possibility followed by more nuanced considerations of construction and volume. Also, see Gareth Long's Video Solid (2006) as an example of how fabbing might interface with more familiar media art practices. The problem with Johnson's skepticism is that it fails to acknowledge the complexity and potential of fabrication. Really though, how can anyone who is interested in the algorithm as a tool for expression not be captivated by this work extending into space - digital artists finally have the opportunity to generate their own "hello world" objects.

If this is indeed an era of software studies it only follows that engaging or creating custom software environments might have material repercussions. Design and speculative fiction provocateur Bruce Sterling identifies the generative means of production as the key issue within fabbing. He states "generative art and design are alien to all conventional creative methods - it challenges them in the way that a kaleidoscope challenges a telescope." Perhaps in framing this emerging access to immediate means of production it would be most useful to return to the notion of the post industrial designer offered at "C.STEM - Breeding Objects." If this new creative class blurs the line between artist and industrial designer as well as code and artifact it only follows that the manner in which we exhibit and consider this work will require rethinking as well. If galleries are going to be increasingly populated with arrays of fabricated artifacts, what will the tone and context of these exhibitions be? Fantastical product launches? Featured objects with extensive accompanying media to document process? Or "business as usual" strategies for sculptural display? Time will tell.