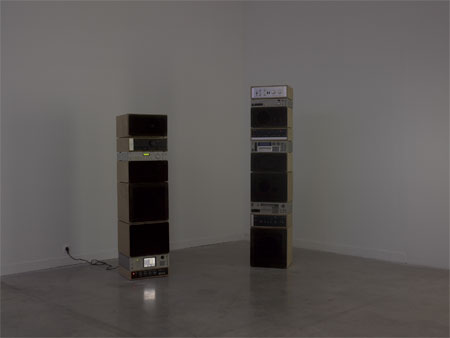 The banlieue, i.e. the French suburb, has always been at core of Bad Beuys Entertainment’s work. Originating from the Parisian outskirt Cergy-Pontoise, the collective has created a reputation for itself through their aesthetization and simultaneous critique of the banlieue as a symbolic system. The socially conscious element in their practice reflects the reference to artist Joseph Beuys in their name, whose work was closely allied with socioeconomic reform. Iconic images associated with the French suburbs, such as burning cars, council housing, and small-time gangsters reemerge as cardboard public housing (Babylone\_by\_us, 2003) or “self portraits” using stand-ins (Sauvageons (little savages), 2004). Bad Beuys Entertainment’s move to recover the popular representation of the banlieue in their work is apparent in the current show at the Palais de Tokyo in Paris.

The exhibition is contained in one, dim room and features two of their works. The first, The Final Count of the Collision Between Us and the Damned (2006), is a reference to a song of the same name on the album Fear of a Black Planet by politically charged rap group Public Enemy. It consists of two piles of loudspeakers that recreate a beat similar to the one in the original song, yet achieved through different sound samples. The musical sequence is created through two loops, each played out on different speakers. What at first seems like a generic, early hip-hop sound turns out to be, when one pays closer attention, divided into two clear components: one pile of equipment plays out a beat (‘the master’), while the other a sample of a scream (‘the slave’). Master and slave are technical terms used in electronic instruments to describe the “master” device (such as a sequencer) that sends information to a unit that acts accordingly, or the “slave”. The former rhythmically leads, ‘tames’ the latter, where the infinite relay between the two echoes the interdependent dynamic outlined in Hegel’s concept of the master-slave dialectic. Using a politicized hip-hop reference as the basis for a sculpture, the work fits the portmanteau of their name, from P. Diddy’s hip-hop label Bad Boys Entertainment to Joseph Beuys’s social critique via artistic medium. 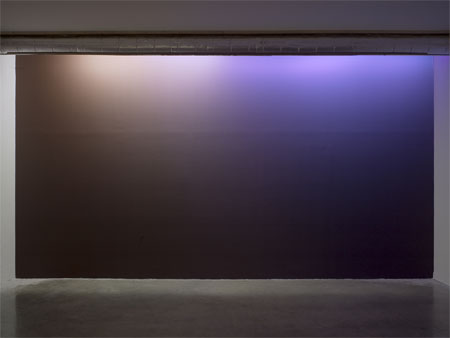 The second, Fluo Brown (2006), consists of a uniform layer of brown paint applied to the back wall of the room. It is lit by a black light and LED bulbs hanging from the ceiling, which transform the tint into a non-descript grey. The title is a reference to the brown paint used to cover various street fixtures in the poor districts of Paris, such as lampposts, to protect them from dust and pollution - a tint also designed to appear as neutral to the eye as possible within an urban setting. This achieves exactly the opposite effect as the fluo paint often used on road signs- that is, physically and symbolically, its aim is to disappear. The one used in the show is an invention by the collective, resulting from the mix of different fluorescent paints. When lit with ultraviolet lamps, it turns grey instead of shining like regular brown paint - one witnesses a disappearance where there should be a sheen. Grey, a color associated with dullness and gloom, calls out the underlying intention of the Fluo Brown used in the banlieues, which is to paint them into a banal disappearance - signaling the location as a geographical outcast.

Beuys famously imagined a world in which everyone would be an artist, and the attentive, harmonious, and collective shaping of their surroundings would result in a grand “social sculpture”. Bad Beuys Entertainment picks up on this humanist tenor, especially in their more critical moments, weaving it through with pop cultural references. In their mission statement, Bad Beuys Entertainment claim to seek “a balance between reality and cliché” and, in so doing, hit on the often surreal representation of “outside.”

Alice Pfeiffer is a writer based in Paris. Pfeiffer graduated last year from the London School of Economics with a Masters in Gender and Media Studies. She writes for the International Herald Tribune and the New York Times, and she is a contributor to Interview and Dazed and Confused. Prior to this, she worked as an editorial assistant for Paperback, and wrote food reviews for Time Out UK.