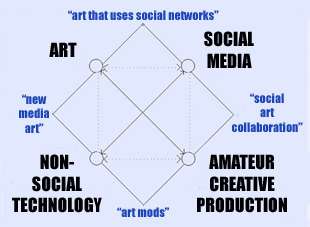 "Art and social media" -- this topic is all anyone wants to talk about these days. The discussion extends from the staid -- the National Endowment for the Arts released a report titled "Audience 2.0: How Technology Influences Arts Participation" -- to more spicy ruminations on what "social media art" offers as a new category, as in the artist An Xiao’s recent three-part series for Hyperallergic.

On the one hand, this faddish obsession with "social media" is understandable. The Facebook Corp. has begun to wrap its fingers around every other aspect of life, so it is clearly logical to ask what effects social media might have on art-making. But at the same time, I find the chatter somehow sad, as if visual art’s power to inspire passion among a larger audience is so attenuated that it has to throw itself on whatever trendy thing is out there, to win some reflected glory for itself.

So, the question for me is this: Is there any more interesting way to think about the topic than the loose and impressionistic manner that it is currently framed? Maybe it’s worth noting that, of all the buzzwords of the present-day lexicon, "social media" is perhaps the only one that is more vaguely defined than "art." Let’s begin, then, by clarifying terms to see if we can get to a more interesting place.