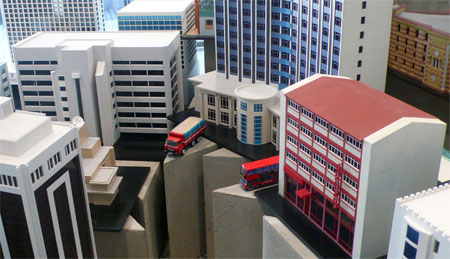 Children love Ahmet Öğüt’s Exploded City. Its miniature edifices are suited to the kid’s-eye-view; youthful height allows the same unobstructed vistas into the cityscape as one of its citizens might have. A further draw for children: there’s a model train underfoot (directly; museum security was busy), albeit stationary. And certain of the city's scaled buildings do resemble dollhouses, although there are no dolls here. Nobody lives in the Exploded City; there are no figurines amidst its reproductions. This vacancy is probably for the best, since Öğüt’s piece—on view at the Berkeley Art Museum until April 11, 2010—is composed entirely of models of buildings that have been damaged or destroyed by terrorist strikes since the 1990s. The structures may be in their inviolate form, but nevertheless, human models placed throughout the doomed buildings would impart a macabre note to the city.

But the Exploded City is surprisingly not tragic, and while it could not be called vital, neither is it sepulchral. Compare, for instance, another recent miniature city: Seth’s (the mononym Gregory Gallant’s nom de plume) Dominion City, which was shown at the Art Gallery of Ontario in 2005 and has been touring Canada since. It’s meant to represent a typical if idealized Canadian municipality of the 1950s or 60s. (To put it in the American context: a pre-Rust Belt Buffalo, New York.) Dominion City verges on the maudlin, mourning its subject while placing it upon a pedestal; Exploded City, meanwhile, strives to place its metropolis in the mythic context—it is a utopian city, in the original, “no-place” sense of the word. 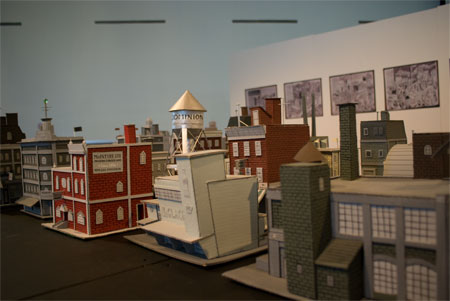 Öğüt establishes this unlikely context through an accompanying story that covers three adjacent placards. There, he “populates” the city, and details how citizens might live with the pall of apocalyptic dread upon them—with pragmatic sanguinity, apparently. Our narrator recounts a visit to the city:

I saw a school on the left side of the road. The signboard read, ‘Once Upon a Time Beslan School.’ When I got closer, I saw through the door a group of kids in the courtyard digging a large pit. I asked them why they were digging a hole. They said that one day in the future, the school was going to be raided and hundreds of their friends were going to perish that day, therefore they were digging this bottomless ditch to prevent those who were coming to raid from getting through.

This extract, while suggestive of Öğüt’s simple prose, is not entirely representative of his overall fiction, which is otherwise beholden to Italo Calvino’s Invisible Cities. Indeed, Öğüt adapts the name of his project from Calvino, as well as, in the accompanying text, the frame of a dialogue between Marco Polo and Kublai Kahn. Along with certain reproducible Italo-Calvinisms—enumeration, a degree of reflexivity, and above all, a studied, parabolic opacity—the result is pastiche. Calvino has “Thin Cities” and “Trading Cities”; Öğüt has an “Exploding City.”

Exploded City might then seem sophomoric, as the considerable debt to Calvino would indicate, had Öğüt not made several wise (and politic) decisions that speak to a maturity that bodes well for future work. Many of his models are unfamiliar to American eyes: the National Library in Sarajevo, the Tikrit museum, a small restaurant in Hayfa. The most identifiable model, apart from the aforementioned Beslan, is the number 30 bus from the 7/7 London bombings. The World Trade Center is notably absent. Had it been included, the parameters of the debate that Exploded City provokes would have shifted, the mythic made present. Although several audience members at the artist talk aimed to buttonhole Öğüt on the subject of Israel, in his work he largely avoided the most controversial terrorist destruction, and was geographically and ideologically indiscriminate in his selection of buildings. The elisions in his curation are not attributable to timidity or apathy, but rather, it becomes clear, to genuine regard for the victims of these often-unknown tragedies; Exploded City spans memorial and re-enactment.

Patrick Ellis works at the Emma Goldman Papers. He last wrote for Rhizome on the occasion of Conflux 2008.