Within the pages of Digital Folklore Reader, Olia Lialina, one of the book’s editors, refers to a claim by the social media researcher Danah Boyd, that some American teenagers identify as Facebook and others as MySpace—preferring a conformist and clean interface persona, or a rebellious and visually pimped one, respectively.

This book, co-edited by Dragan Espenschied, is by all outward appearances a MySpace, brimming with exuberant design elements culled from all over the net and reaching deep into online history. The dust jacket repeats a background image of a unicorn perched on a boulder at sunset under a meteor shower. Its reverse is wallpapered in 32 by 32 pixel gif icons representing the gamut of popular user-generated online imagery: cartoon characters, porno ladies, geometric designs, quotidian objects, flags, logos, landscapes and text, from WTF to FREE TIBET. One layer deeper, the cover and back of the book are white, or, probably (in RGB concept), nothing. The spine is also nude, showing off the motley sequencing of pages inside, the first and last of which are a flat, vibrant #00FF00 green, allusive of web-safe color and maybe of a green screen, primed for content to be transposed onto it.

Published by Merz Akademie Stutgart, Digital Folklore Reader is divided into three sections: “Observations” (the core texts, mostly republished essays by the charming, prescient editors), “Research” (insightful student papers) and “Giving Back” (documentation of student projects). Folklore can be considered history told from the perspective of a certain cultural group, and this conception of folklore is precisely what the book endeavors to record. Digital culture involves all kinds of players, including inanimate ones that transmit and present information, and this folklore belongs specifically to users. The fact is writ large, literally, right before the table of contents, in big neon letters spelling out the eerie, friendly question, “DO YOU BELIEVE IN USERS?” 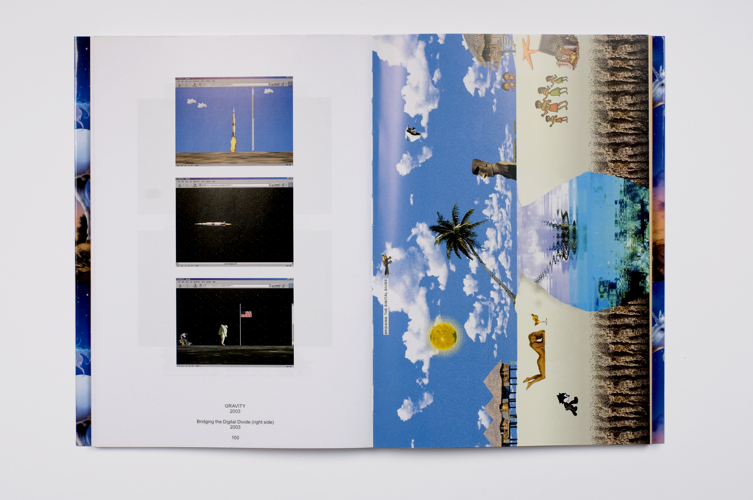 True to the spirit of folklore, from among the nuanced, idiosyncratic accounts and observations that make up part one, there is a repeated narrative that defines the historical significance and instability of users. It is a trauma that practitioners of net art experienced along with all early internet users: digital culture’s abrupt shift from utopia to… something else. And this something else has long since revealed itself to be ordinary. Online terrain, like any other, is ripe for colonization by the corporate mechanics that pilot Western society. It’s hard to predict the future, but it seems that as of 2010 most of these stories are past tense. Users, whose autonomy is already diminished, remain in constant threat of being squelched out like the Na’vi. (A side note in keeping with the book’s multi-tiered, multi-tasking structure: the data cloud directory on page 16 confirms that “Users,” tagged 17 times in the book, and “Money,” 12 times, are indeed the number one and two most frequently occurring keywords.)

There is a semi-structural, manifesto-ish quality to much of part one, which is both instructive and playful. Text is organized into narrow columns, two per page, which keep a reader’s eyes constantly scrolling. Espenschied’s article “Put yer fonts in a pipe and smoke them,” about the control system that maintains the abysmally limited selection of browser-compatible fonts, is itself rendered in something like handwritten fine point blue marker. This playfulness, and cohesiveness, makes a great vessel for persistent and at times rigorous analysis of online life, which itself has always been rooted in exploration, discovery and excitement, and benefits from complimentary conveyances (especially when things get technical!). 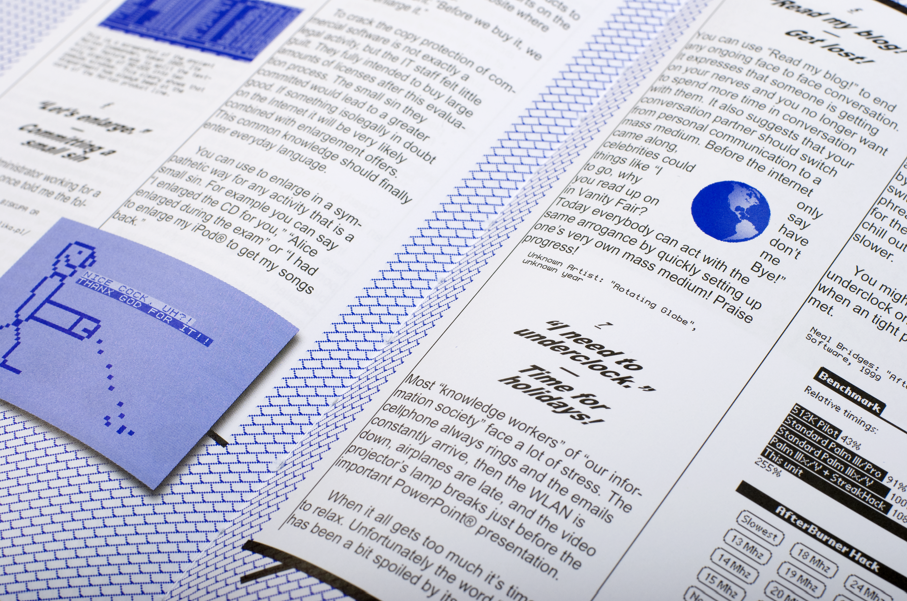 Building upon the contextual foundation laid by the bubble-bursting end of Eden fable (which, I should say, is rarely harped on as such), the essays in part one—including Dragan Espenschied's on online idioms finding influence offline, and Jörg Frohnmayer’s on virtual reality, written in collaboration with Espenschied—linger on other touchstones and tangents, such as Lialina’s provocation in “Who Else is the Cloud?” (2008) that computer culture is underdeveloped because computing power is mainly spent on making computing invisible (no wires, increasingly slimmer machines). She points out that this direction is making people forget about computers. This alludes to a kind of role reversal, in that without a clear vision of the tool used by a user, it is less certain as to whether the user is really the user or the used (that would be: the tool).

Part two, “Research,” features four recent essays examining four contemporary online phenomena and could be read as products of the folkloric tenets outlined in part one. Each is crisp and informed, and their topics— each a bit cheekily pop, to varying degrees—are approached with a pragmatic consideration for history and scholarship. In “I Think You Got Cats on Your Internet” (2008), Helene Dams takes on the trope of the lolcat, seizing on the importance of the funny online kitty lexicon as “a gigantic, global insider joke.” This is an oxymoron that quite profoundly demonstrates the internet’s facilitation of an alternative economy in which content can carry multiple possession statuses at once—as examples: both public and private; or all of individually owned, shared, and free. An insider joke isn’t diminished by infinite insiders (or nurtured by exclusivity). Total dispersion forms social gospel. 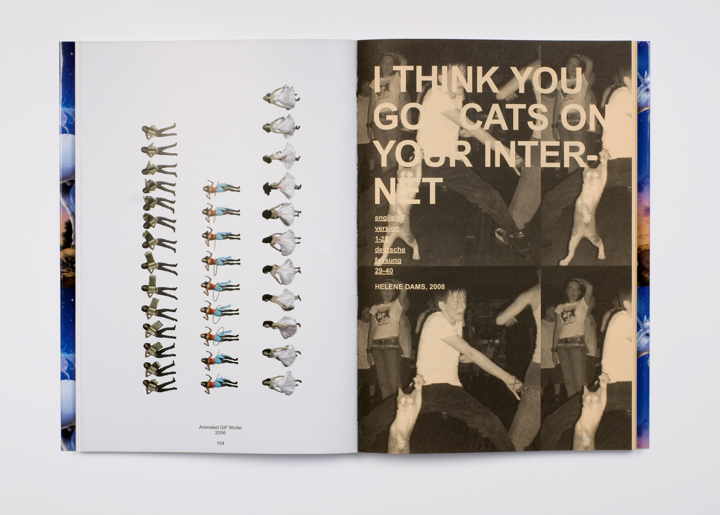 This system of abundance and ambidexterity is what marketers study to orchestrate the internet’s capitalistic effects. Specifically they look at user behaviors within the system, which is a subject of Dennis Knopf’s paper “Defriending the Web” (2009). He begins with well-chosen industrial/post-industrial parallels, noting the late nineteenth century philosopher Georg Simmel’s observation that the urban-dwelling (thus more besieged by technology and interfaces) “metropolitan type of man” copes with her surroundings by shifting from a reliance on the heart to “that organ which is least sensitive and quite remote from the depth of the personality.” Knopf relates this to the further stripping away of personality that occurs nowadays when a user constructs an online profile. Further, just as Fordism (mass production—supply courting demand) was usurped by Toyota’s “post-Fordism” (mass production, to-order—demand dictating supply), the author explains how progressive marketers make use of this wealth of indexical personal information to discern what consumers want produced (so that they can consume it, duh). Netflix, with its algorithmic recommendations, is appraised a perfect example of this Sisyphean modern convenience.

Isabel Pettinato’s inspection of viral media’s attributes, uses and historical trajectory, “Viral Candy” (2009), identifies the effective Viral as “susceptible to imitation” by other users, thus proliferative. The essay synthesizes (probably by virtue of part two’s order) ideas about user behavior and economic power structures, touching on aspects of Dams’s and Knopf’s. Pettinato explains how Chris Crocker, the blond, electrifyingly distraught Britney Spears fan “became an Internet celebrity via the dynamics of cultural participation alone," which is essentially an apocalyptic example of the post-Fordist user want-realization machine, in which the commodity that is produced began as and remains a user himself! When the author pinpoints the plot and genre qualities that make for a successful Viral she summons Henry Jenkins’s interpretation of a Cadbury commercial in which a huge Gorilla performs the stirring drum solo in Phil Collins’s “Something In The Air Tonight”. Jenkins states that “[The Viral’s] absurdity creates gaps” (in the words of John Fiske) “wide enough for whole new texts to be produced in them.” Just as with the interior/exterior pleating of the lolcat paradigm, the individual viral video is read to contain an unlimited potential for expansion, based on its ability to open up attentive experiences in an environment carrying a serious attention deficit. 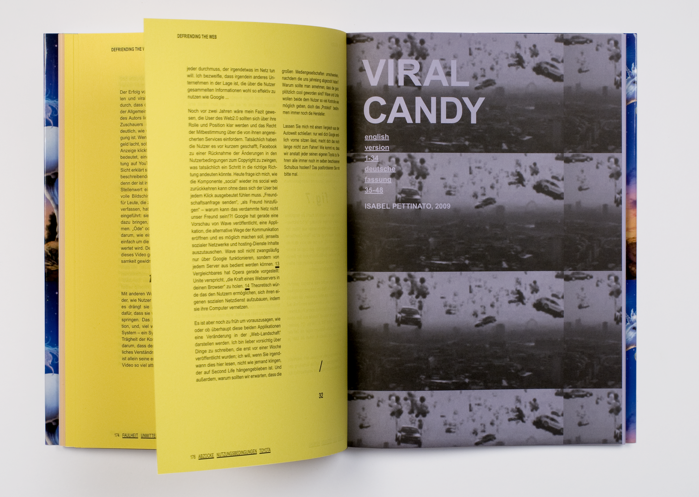 On a lighter note, Leo Merz in “Comic Resistance” (2009) investigates the symbolic significance of the cult font Comic Sans, tracing its origin to a failed Microsoft operating system, and linking its embrace by the electronic music scene to their co-morbid affinity for Roland synthesizers, whose originally intended purpose was also failed. Merz explains that "electronic musical instruments like the Roland and Comic Sans were both conceived as solutions to specific functional needs," and after their services were no longer required, they were repurposed through a transgressive act of abuse, that is ab-use: wrong use—a semantic framework that underpins much of the section’s concluding essay.

The book’s third part, “Giving Back,” reads more or less as an appendix. It is a sampling of projects made by new media and interface design students at Merz Akademie, presumably under the tutelage of the editors. One work, by Florian Kröner, cleverly titled Emolator (i.e. emo-generator), is a web application that applies template looks consisting of jet black, razor-styled hair, melodramatic body markings, etc., to user-uploaded photos. In effect, while a desired facade is achieved, the self-styled entity in the source image is immolated, amounting to a tight little double entendre. If the project is not particularly moving as an artwork, it does, as do many featured in “Giving Back,” have a prolific life as a user interface, having served thousands around the world. 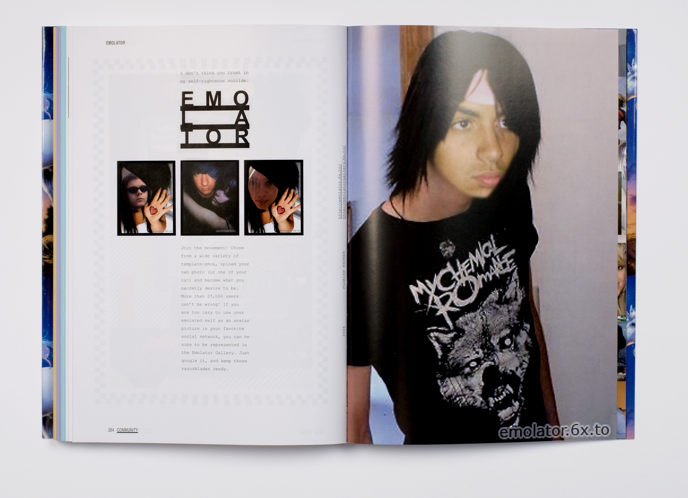 The users involved with Tobias Leingruber and Bert Schutzbach’s Hoebot and LoveBot (2007) have also been served. Both bots infiltrated online communities of “crazy parties and hot girls” on the German counterpart to Facebook, studiVZ, to conduct a creative anthropological experiment. The former automatically posted misogynistic, beer-oriented comments on the hosts’s walls, and in turn received access to personal data about the girls, along with invites to keggers. The latter utilized the information gathered by Hoebot to tell compatible subjects that they should get to know each other, earning a reputation as a creep and social pariah.

Overall the projects are simple, practical exercises testing many of the topics discussed throughout the book. While in one sense I found the section to be a bit anti-climactic, it is interesting to consider these students as examples of users, in terms of how users have been positioned throughout the book—that is, as active entities, but as ones that are nevertheless subscribed to external protocols (commercial software, website templates, etc.). The students are more or less subscribed to the protocols of their teachers and to the ideas presented in this book. I don’t fault this at all. It’s a further illustration of the compromised but vital role of the user, as an evolutionary figure whose contributions to culture come by tests and trials, rather than mastery and molding. Similarly, Digital Folklore Reader is honest, inventive and comprehensible rather than comprehensive, chronicling what in digital culture is going and gone, while pivoting for the even longer trail of what is yet to be completed.