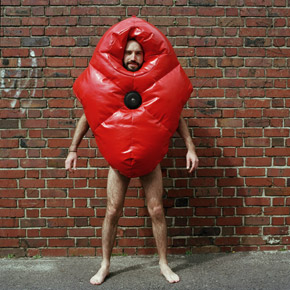 Suited for Subversion is a project to create a suit that protects the wearer at large-scale street protests. The suit also monitors the wearer's pulse and projects an amplified heartbeat out of a speaker in the chest of the suit.

I designed and fabricated the first prototype of the suit as part of my Masters Degree in the Interactive Telecommunications Program at New York University. The project draws on my work as an activist involved in street demonstrations in New York, and is influenced by the work of other activists and demonstrators who wear protective clothing and make creative use of tools and technologies for protest.

Of particular influence are the 'white' or ‘white overall’ tactics of the Ya Basta, WOMBLES, or the Tutti bianche, who wear white protective-wear to protests. Like the Pret a revolter clothing line produced by my friends Las Agencias, and pictured below, centre, my suit fuses white tactics with more playful, carnivalesque, or 'pink' tactics. As much as my suit is armour, it is also disarming; as much provocation as protection.