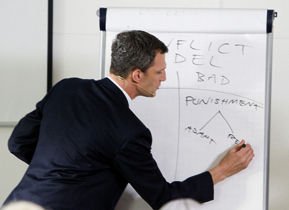 Join us this evening at 7:00pm for Nicoline van Harskamp's Expressive Power Series Part 1: Max Bonner on the Phenomenology of Speech, a New Silent Series event. This new performance builds upon an expansive body of work focused on politics and language. This ambitious, hour-long theatrical piece centers on an Interpersonal Dynamics consultant named Max Bonner and members of his audience, including a human rights activist, an academic, and a dogmatic anarchist, whom he attempts to convince of popular psychological models for social persuasion that are used variously by the Pentagon, corporations, and NGOs worldwide. The evolving discussion demonstrates, in the artist’s words “the impossibility of political consensus by way of verbal interaction”—a situation that is here framed productively, with generative meaning to be found in points of dissonance, paradox, and negotiation. Cast includes Greg Shapiro, Liz Bolton, Mark Bellamy and Sheila Evans.

Last week, we published an interview with van Harskamp in which she discusses Expressive Power Series and her practice. Read it here.