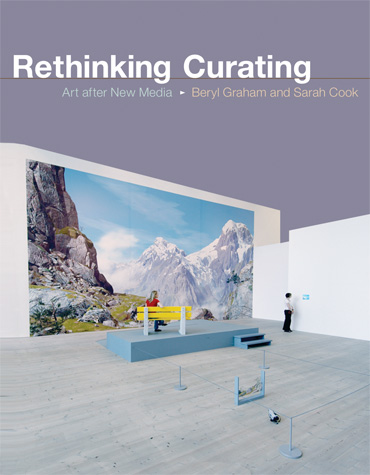 Humorous and surprising, smart and provocative, Rethinking Curating: Art after New Media (MIT Press, 2010) jumps from opposing viewpoints to opposing personalities, from one arts trajectory to another. The entire book is a dialectic exercise: none of its problems or theories are solved or concluded, but are rather complicated through revelations around their origins, arguments and appropriations. Overall, the book adopts the collaborative style and hyperlinked approach of the media and practice it purports to rethink. In other words, it is not just the content of the book that asks us to rethink curating, but the reading itself; by the end, we are forced to digest and internalize the consistently problematized behaviors of the “media formerly known as new.”

Sarah Cook and Beryl Graham, co-editors of the CRUMB site and list (the Curatorial Resource for Upstart Media Bliss), have co-authored the book via email and on a Wiki, and assert outright that it is not a “theory book”; its structure instead “reflects the CRUMB approach to research, which discusses and analyzes the process of how things are done” (12). The sheer number of examples, citations, and first-person accounts in this nearly 350-page volume make it so that every time the trajectory coheres into a singular point or argument, it is then broken up again, into a constellation of ideas that make us rethink, again. We are issued challenge after challenge to our assumptions about media, our understandings of curatorial practice, and our opinions about the spaces in which we exhibit art. It is only after an exhaustive study of seemingly irreconcilable philosophies, practices and venues, the book implicitly argues, that we can begin to engage with what needs to be rethought, and how to do so.

Rethinking Curating makes three basic arguments. First, that one must approach a broad set of histories in trying to understand any given artwork, and “for new media art this set includes technological histories, which are essentially interdisciplinary and patchily documented” (283). Second, that such broad histories have led to the unique development of “critical vocabularies for the fluid and overlapping characteristics of new media art” (283). Cook and Graham reason that new media are best understood not as materials but as “behaviors” - participatory, performative or generative, for example. And third, that these behaviors demand a rethinking of curating, new modes of “looking at the production, exhibition, interpretation, and wider dissemination (including collection and conservation) of new media art” (1).

The first 5 chapters, Part 1 of the book, examine “those characteristics peculiar to new media art and the histories of art relating to those characteristics” (13). Chapters 1 and 2 begin by attempting to make sense of the histories, theories and behaviors surrounding the ever-changing landscape of new media. Of special note is the authors’ understanding of the “hype cycles” of all art forms - which go through technical discoveries, inflated expectations, disillusionment, enlightenment, and finally acceptance (24) - and their explanation of how new media are most often unfortunately and unfairly lumped together, rather than being separated into, for example, net.art, virtual reality, robotics and interactive video. Each of these, they remind us, is not only at a different point on their hype cycle, but also traveling at a different speed across the slope (39). Only when “the peak of inflated expectations” for each medium has passed can the “long-term effects… upon the world of contemporary art” be “open for consideration” (284).

Chapters 3, 4 and 5 then look at space and materiality, time, and participative systems, respectively, as they relate to arts production and curatorial practice. Here Cook and Graham put forward various taxonomies for explaining, for example, “interaction” as opposed to “participation” and “collaboration.” These are defined not as definitive, but in order to differentiate behaviors and modes, and use them strategically in art-making and curation - and thus in how art is experienced and/or acted upon (112-114). Some of the gems in these chapters include statements like “time and space are particularly difficult to separate in new media” (87), or the case studies, which include the Walker Art Center (73), Harrell Fletcher and Miranda July’s net.art classic, Learning to Love You More (103), and the Medialounge at the Media Centre, which broke up the audience experience into passive, active and sit-down/reflective “zones” (103). The book astutely reminds us that while not “all new media art involves interaction or participation,” curators must always question the “relationships among artist, audience, and curator” (111). 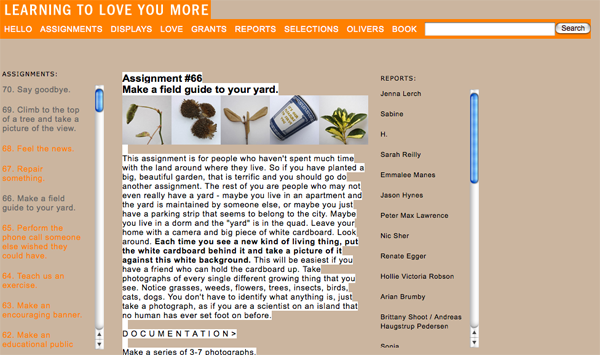 Part 2 of the book, chapters 6 through 10, expands upon models of curating, both inside and outside of institutional systems. How can curators, the authors ask in chapter 6, “account for the behaviors of works of new media art, and what logical curatorial procedures” might they undertake in response? (147) They ask this with an understanding that the interface of new media is not just a practical one, but can actually change the meaning of the work itself (284). Here, Cook and Graham argue, the best practice for new media is “not to recapitulate old ways of working,” such as more traditional exhibitions, but to find new modes of “production and distribution that best fit the art” (147). Its curators need to “engage in translation between the systems of contemporary art and new media art” (16), must work across “exhibiting and interpretative events… online and real space… content and contexts” (168). They are producers, collaborators, champions, outsiders, quoters, surgeons, communicators, and more (156).

Chapter 7 goes to great lengths to understand the interpretation, display and audience of new media art more generally, whereas chapter 8 understands new media in the art museum, and chapter 9 looks at “non-collecting exhibition spaces” (215), such as science museums, trade shows and conferences. The authors remember, on the one hand, that museums are where art history is made (189), and that each “exhibition is itself like a temporary collection” in how it fits into the museum program and identity (150). On the other hand, they continuously remind us that “an artist doesn’t need the official sanction of the art system in order to be included and noticed by the art world” (221), and that “new media art can potentially change” institutional systems of exhibition and conservation “into something more fluid, albeit perhaps more messy in terms of archive” (211). Finally, they discuss “hybrid modes of working outside the museum but within the landscapes of contemporary art and digital culture, from the biennial to the blog to the lab” (247). They do this in looking at the work of artists like Vuk Ćosić, and spaces such as V2 in Rotterdam.

The most salient points of the entire book - and those that will make Rhizomers and new media art junkies more generally smile and cheer - take place in chapters 10 and 11. The former talks about the benefits and shortcomings of showing in different kinds of spaces, from artist-led ways of working to audience-led (248). In chapter 10, the authors astutely assert that, “it is impossible to argue that new media art, like any other form of emerging practice, has ever been anything but artist led” (251-252). They give as two examples here the infamous Whitneybiennial.com (Miltos Manetas, Patrick Lichty and Michael Rees), a kind of hoax intervention in New York that never occurred (254), and NODE.London, a UK-based media art network. Chapter 10 also reminds us of the curator’s vital role - even in artist-led networks - as registrar, administrator or programmer (271), but also of how fun this might be. Citing themselves/ their own CRUMB biography on page 283, they aver, “Once you’ve curated new media art you’re unlikely to curate anything else the same way again.” 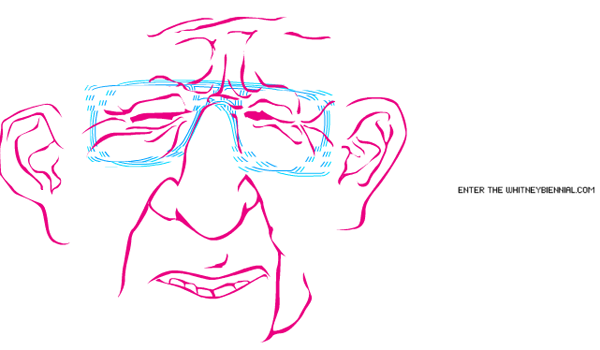 And chapter 11 - the book’s conclusion, billed as part 3 - finally asserts that “New media art presents the opportunity for a complete rethink of curatorial practice, from how art is legitimated and how museum departments are founded to how curators engage with the production of artwork and how they set about the many tasks within the process of showing that art to an audience” (283). This work is not about “art in technological times,” but “life in technological times” (286-287), and thus the best way to curate it - “to produce, present, disseminate, distribute, know, explain, historicize” it - is to know “its characteristics and its behaviors, rather than imposing a theory on the art” (304-305).

Rethinking Curating is an encyclopedic study of new media practice - about making, showing, viewing, curating, thinking and writing. I recommend it in three modes: as inspiration, with the sporadic skim of random chapters - I kept taking notes, excitedly reflecting on how I might apply many of the ideas presented; as a classroom text - various parts of the book might work in courses on, for example, art, education, conservation, and of course curatorial practice; or as research - the thinking, case studies and references are extensive. Without a doubt, this book is a necessary part of any new media art library, and will be an important document in years to come.

Nathaniel Stern (USA / South Africa) is an experimental installation and video artist, net.artist, printmaker and writer. He holds a design degree from Cornell University, studio-based Masters in art from the Interactive Telecommunications Program (NYU), and research PhD from Trinity College Dublin. He is an Assistant Professor in the Department of Art and Design at the University of Wisconsin - Milwaukee.