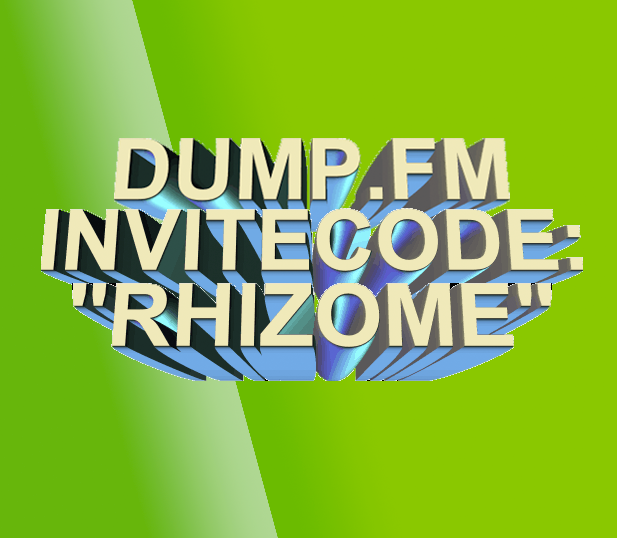 Editor's Note: Ryder Ripps, of Internet Archaeology, along with Tim Baker (Delicious) and Scott Ostler (MIT Exhibit), recently launched a beta version of dump.fm, a chat room where participants communicate solely through images. The site combines the creative back and forth of surf clubs, tumblr’s loose and rapid-fire network of image transmission, and the real time spontaneity of an old school chat room. Right now dump.fm is strictly invite-only, but Ryder was generous enough to offer a special invite code to Rhizome readers - “RHIZOME” - so they can play around with the site. Ryder drafted a statement about his concept and aspirations for dump.fm, below.

I remember going into AOL chat rooms, and experiencing instantaneous glee. The hyper-everything world; where experiences come and go at the pace of your typing. Instantaneous collaboration and connection. These are the feelings I wanted to recreate in conceptualizing dump.fm. Dump.fm is a place where you can share images from anywhere on the web, your hard drive or right from your webcam, in real time with other people. Today content moves so fast, making a blog post from a week ago irrelevant. Dump.fm is a place where content is hyper-transient and used to facilitate connections and induce creativity. I think in the future people will produce and consume content much faster and because of this we must reconsider the value of content. For the surf club Spirit Surfers, content is a way to document and make public the most powerful content in the hypnotic surf, “Most of the really enlightening surfs I've had did not end with a post to a surf club -- surfing is so private, it rarely ends in a public act.”, as club creator Kevin Bewersdorf states. Where surfing was a private act from computer to computer, friend to friend, and node to node; dump.fm makes it a public, real time and collaborative act. The surf becomes discovery and the discovery becomes collective.