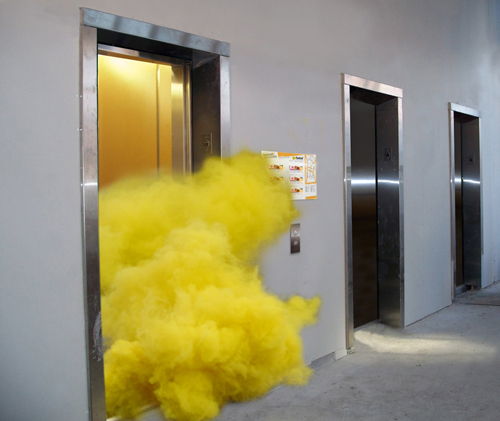 JOGGING, SMOKE BOMB IN AN ELEVATOR, 2010

For art collective JOGGING - artists Brad Troemel and Lauren Christiansen - this crisis is not limited to Internet art, but has instead become the normative condition under which art is produced and viewed today. In an essay on "Redefining Exhibition in the Digital Age," JOGGING notes that:

Art cannot exist without an audience, as it relies on media for its existence as art. With today’s burgeoning potential for digital mass viewership, transmission becomes as important as creation. Contemporary online artists are aware of this fact and seek to actively make use of its potential. Dematerialization is not an oppressive suffocation of art but a possibility for art to flourish in disparate and progressive discourses. The web offers infinite room for expansion and participation unlimited by the more severe constraints of space and finance.

For the vast majority of young artists, regardless of their medium, the work they produce is viewed primarily online as images or video uploaded onto artist's sites and blogs. Even when artists participate in small shows, the majority of publication and viewership takes place in the form of documentation. The museum and gallery space serves a resume building function for art that is largely produced and distributed online. It no longer functions primarily as a space that draws potential viewers or buyers, but is instead a formality, something to be put on a CV. 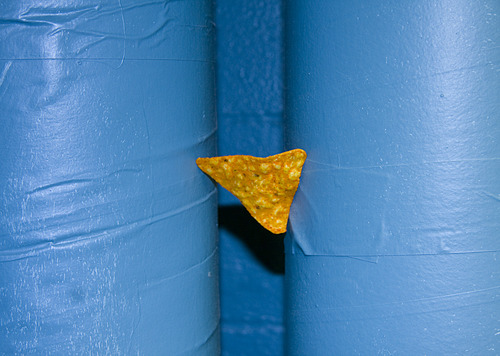 JOGGING uses the microblogging platform Tumblr as a stage for immaterial works of art both real and digitally manipulated. The site functions as an evolving sketchbook in which ideas are conceived and executed with a speed and immediacy unconstrained by physical or institutional limitations, with as many as twenty pieces of work posted per day. This is in deliberate contrast to personal websites and curated portfolios in which an artist limits his or her production in an attempt to carve out an identifiable brand. Instead, JOGGING sees itself as both artist and art object, composed of multiple pieces or individual works but functioning as a single schizophrenic body, an abstract machine. For this very reason, it is difficult to categorize the large body of work accumulated on the site. The use of Tumblr as distribution platform seems a natural fit to the image dump distribution of works on JOGGING, as the use of Tumblr's dashboard decontexualizes each image from the site and allows it to spread virally from Tumblr to Tumblr (to FFFFound, to dump.fm, etc.). While the reblog function of the site attempts to maintain a chain of attribution, images are frequently stripped and reposted to begin new chains with new "authors," such that image producers knowingly lose control of their work upon posting it to the site. Thus the labor of production that goes into each work is given up, distributed, and open sourced with the tacit knowledge that it may become incorporated into the Tumblrs of others, to become part of their personal brand, to be reproduced by viewers through "theft" or decontextualization.

It is this fascination with these questions of production and materiality that seems most tangible in JOGGING's work. While some pieces are simple photo documentation of sculptures and events, many are purely digital objects pulled from Google image search and re-composited in Photoshop or otherwise digitally manipulated. Each piece functions as a kind of purposeful simulacra, as documentation of an object, installation, or performance that does not exist and never took place. In adopting this language of deliberate exhibition and co-presence, JOGGING calls into question the condition that art take place in a predetermined space, be planned in advance, or even produced by the artist themselves. A .jpeg documenting the illegally downloaded contents of a .rar full of Earth, Wind and Fire's greatest hits accidentally in .wma format is labeled as "Performance," and a photo of a polo shirt pulled over a shrub is marked as "Installation." While each piece may seem unimportant on its own, when viewed as part of a growing collection of work unconcerned with the materiality, permanence, or the importance of the individual piece, any insistence on the auratic quality of the object itself falls away. Indeed the content of each piece is doubly immaterial. Not only do they exist in passing, as documentation, or not at all, they are also unconcerned with the question of quality or importance, and are relevant as process rather than as product. This immaterial ethos was perhaps most exemplary in the recent group show An Immaterial Survey of Our Peers, in which 49 young artists selected by JOGGING submitted work to be digitally composited onto images of the empty gallery space, which were then projected in the gallery as documentation of an event which never took place. 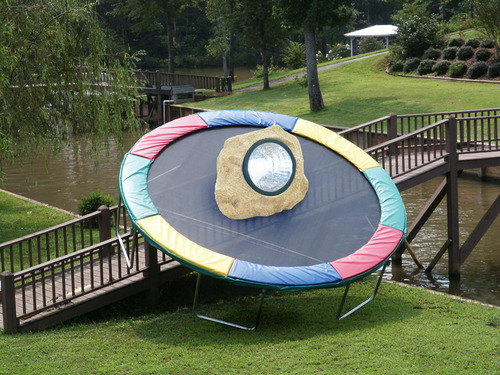 In a conversation with Maciek Pozoga in June of 2009, Troemel explains that:

Everything we do is about trying to achieve the greatest amount of relevant multiplicity possible (with a disdain for craftsmanship). This isn’t the result of some kind of rule we’ve made for ourselves (i.e. Note to self: make 1 sculpture, 2 installations and 3 videos by the end of the day). It’s what we think happens when people are honest with themselves and acknowledge a variety of interests and intents instead of going down the [route of] pigeonholed self-curation...

This refusal of a coherent identity, both online and off, is most tangible in JOGGING's work Perfor Manceart, a Facebook avatar that acts directly on the public interfaces of other profiles. The project/avatar seeks to explore the limits of acceptable conduct on Facebook as a means of revealing the underlying communicative restrictions of the platform. Through behavior that can only be likened to trolling, Perfo Rmanceart explores the protocological limits of what may appear to be an open communicative platform. In DEFINE A STRANGER BLANKLY, 2010, a "friend" is repeatedly tagged in images of blank space, such that their default photo page is emptied of the user's image. For the performance UNTITLED (AFTER MARINA ABRAMOVIC), 2010

Perfo Rmanceart’s Facebook account log in and password were made open to public use through an image that was its Profile Picture. Over the course of the next 6 hours, anonymous people (or person, singular) proceeded to post status updates, start instant message conversations, create events, join groups and post on other people's walls using the Perfo Rmanceart profile. The information transmitted by the anonymous entity(ies) was sexually aggressive and personally insulting, similar to the physical acts committed upon Marina Abramovic during her 1974 performance of Rhythm 0. The performance was ended when artist changed the password without telling the public out of sympathy.

As one might imagine, one of the goals of Perfo Rmanceart is to be repeatedly administratively deleted and reborn, exploring the possibility of death and disappearance in virtual environments, and trying to find the limit point at which the avatar might truly cease to exist. This performative binary of appearance/disappearance is made particularly poignant in an environment in which users are so carefully tracked and profiled such that they may be better served and sold to advertisers. 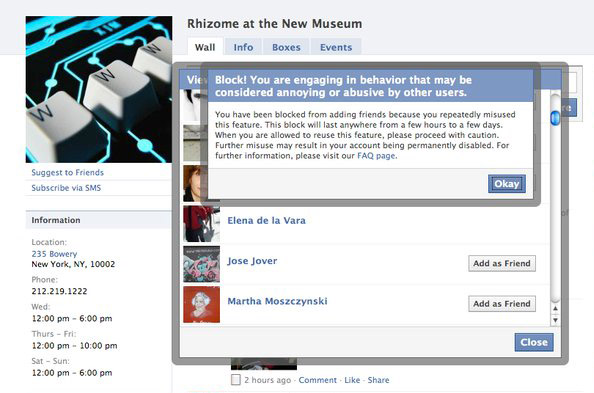 JOGGING, MAXIMUM NUMBER OF FRIENDS REQUESTED FROM RHIZOME'S FAN LIST BEFORE BEING BLOCKED FROM FACEBOOK, 2010 (Part of the series "Perfo Rmanceart")

Perhaps the most large scale intervention initiated by Perfo Rmanceart was the READY OR NOT IT'S 2010 group show on the Los Angeles County Museum of Art's Facebook wall. In an open call initiated by Perfo Rmanceart, artists were encouraged to share images, videos, and links of their work (or the work of others) on LACMA's wall, effectively initiating a distributed denial of service (DDoS) attack in which the profile was bombed with hundreds of posts. For the artists, the performance was an attempt to seize curatorial control of institutions that do not publicize and contextualize art online, choosing instead to use the medium as a platform for advertisement, and as a means of enticing viewers to visit real-world institutions. The piece was framed less as an attempt to gain the notoriety of having "exhibited" at LACMA than an attempt to bring LAMCA into the contemporary, networked world of art making and distribution; it was an inclusionary gesture in the form art-as-spam. While these performances may not always function as radically political interventions, they serve to expose the frame of acceptable behavior in what is a highly controlled networked space through self-reflexive appropriation. Thus it is less a question of whether the artists succeed in claiming the curatorial power of the museum as institution, a gesture that would imply a desire for and reification of that power, than it is about the making incoherent of the institutional façade. It is this playful incoherence that makes JOGGING equally frustrating and fascinating.