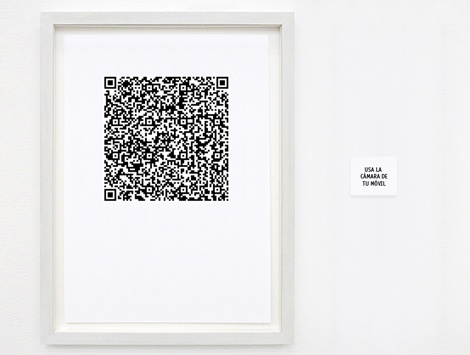 The piece is a reflection about the history of the reproduction of images, extending its boundaries to the interactive scope, it requires audience participation to complete. Draws a parallel between the traditional context of printmaking and contemporary mas media dissemination of images in the digital age of Internet and mobile phones. Start from the visual similarities found between the geometric Kufic Arabic calligraphy and QR codes (Quick Response) used to transmit information current data can be decoded with a mobile phone camera. This type of calligraphy, best known for being the first in which the Quran is written, it also has great importance in the dissemination of mystical poetry. Using computer software, were coded Mathnavi different fragments, a masterpiece of Sufi mystical poetry, unlike other branches of Islam, using the intuitive practice and experience, to get a direct knowledge of spiritual realities (Tahqeeq) throughunveiling (kashf) and inspiration (ilham). The computer language of process and production codes, is scheduled and runs on an arabic numeral system, the binary system of zeros and ones, thus the contents of a medieval expression that seems to have stuck in time, serves as a starting point for a process that generates an image of the 21st century. The project consists of eight parts, one for each volume of Mathnavi. - Manuel Fernández