Internationalism and Nationality; Antiquity and Contemporaneity at the 54th Venice Biennale 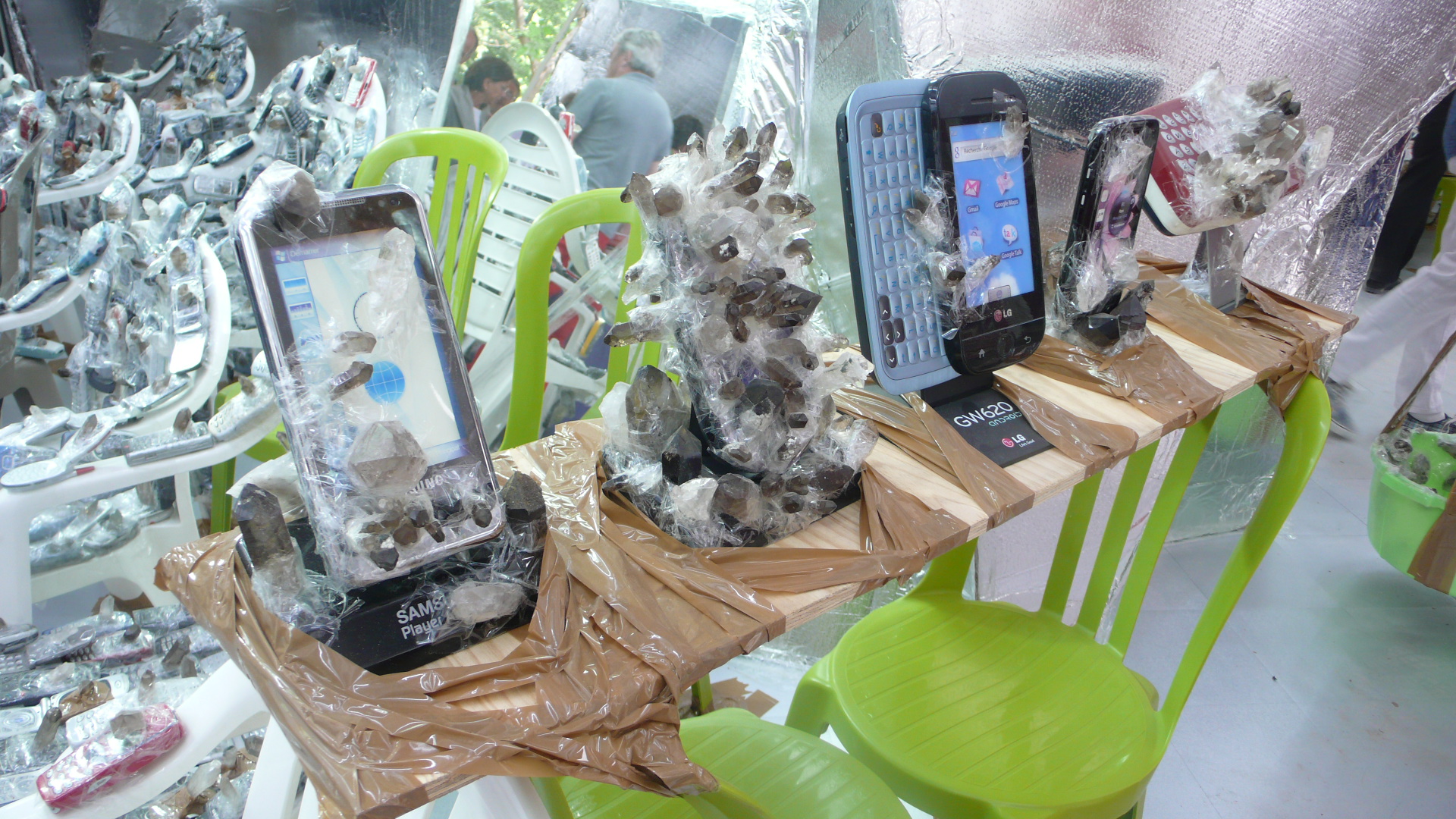 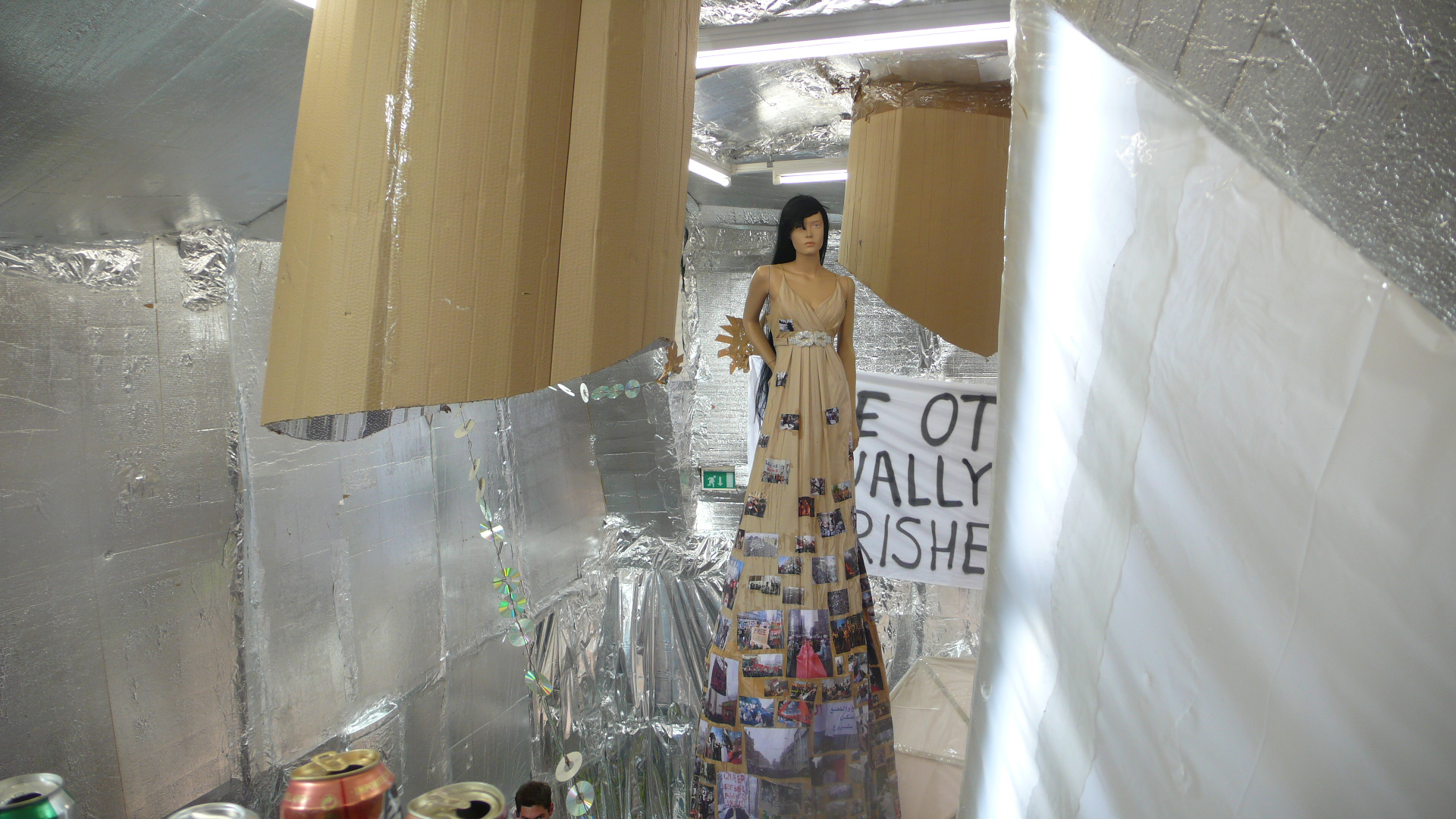 What always seems urgent and perhaps ineffable to curators is how notions of nationality come to pass in a biennial setting. Look at the last Daniel Birnbaum-curated Venice Biennale for evidence, his “Making Worlds,” or the last documenta in 2007 curated by German couple Roger Buergel and Ruth Noack, which, similar to Okwui Enwezor’s preceding documenta, displaced the exhibition in lesser-known, sometimes third-world locales. We now find Swiss curator Bice Curiger’s comparatively breezy ILLUMInations inhabiting Venice, looking to the aesthetic experience as one of transcendental enlightenment while also meditating, somewhat confoundingly, on how an artist’s nationality effects the production of their work.

Although there exist many a pleasant moment in Curiger’s biennale, the curator stumbles over contextualizing it, and often relies upon generic ideas to band together ideas with no real curatorial thesis. Curiger writes, “The term ‘nations’ in ILLUMInations applies metaphorically to recent developments in the arts all over the world, where overlapping groups form collectives of people representing a wide variety of smaller, more local activities and mentalities.” I take this wily statement to mean that recently, artists of varying locales band together to represent their nationhood in larger groups—a sentiment not exactly illuminating.

In a further attempt to explain what needn’t be explained, Curiger writes, “ILLUMInations emphasizes the intuitive insight and the illumination of thought that is fostered by an encounter with art and its ability to sharpen the tools of perception.” Here I was under the impression that it was part and parcel of successful art works to “enlighten” its viewer through an aesthetic experience, how that is emphasized, I’m not sure. My guess is that this throwaway concept is one Curiger found to unify an essentially un-unifiable group of works. Perhaps the sole phenomenon unifying all works is Curiger’s propensity to pick out the most hot artists of a given moment: R.H. Quaytmann and Seth Price in New York; in London, Klara Liden, who just had a solo show at the Serpentine, Elad Lassry in Los Angeles, Sharyar Nashat in Berlin, among others. Although Curiger falters in her apparent subscription to cool internationalism, much of the work comprising the Biennale—particularly in the exhibition’s Central Pavilion in the Giardini—is worth consideration.

Curiger’s most unexpected curatorial maneuver accounts for her most successful. Upon entering the central pavilion in the Giardini (with ILLUMINATIONS scrawled upon it by painter Josh Smith), and through a small foyer festooned with a scintillating Philippe Parreno, hangs several massive canvases by 16th century Venetian painter Jacopo Comin Tintoretto. While some may wonder what a 16th century painter is doing in a biennial of contemporary art, this moment ties together the biennale’s locale with a collectively recently renewed interest in antiquity in the face of an increasingly fast-paced society. Curiger explains her interest in Tintoretto as a moody painter rife with idiosyncrasies by way of his use of light, connecting these attributes to a contemporary attitude, “In many contemporary artists (the ones who interest me most), I find the same search for light, both rational and febrile, that animates some of Tintoretto’s later works. Tintoretto too was worried about overturning the conventions of his time, through a near reckless approach to composition that overturns the well-defined, classical order of the Renaissance.” Curiger never states it as an explicit intention, but with her inclusion of Tintoretto, the curator seemingly opened up a can of worms for artists to obsess over gamechanging moments from distant art history, specifically the Renaissance, providing a more intriguing leitmotif throughout the biennale. 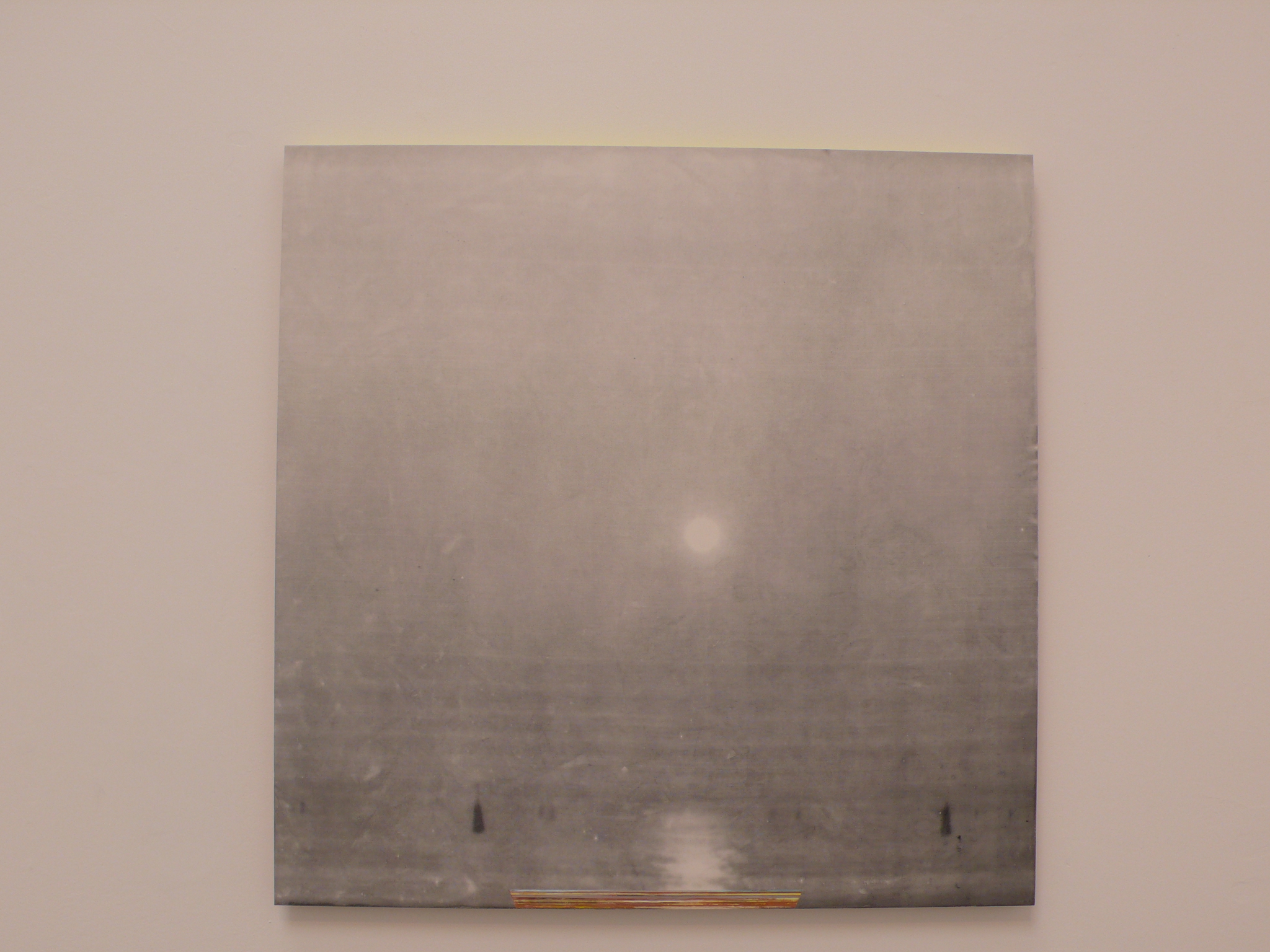 Evidencing this curiosity with Renaissance anomalies is R.H. Quaytman’s new “chapter” of screenprinted works featuring constellations of shapes and historical riffs pulled from the cityscape of Venice. Found in the bowels of the Central Pavilion, a room dedicated to Quaytman features one composition screenprinting a photograph of a palazzo terrace on one canvas while lifting the terrace floor’s triangular tile pattern to another. Quaytman pulls images from Venetian engraver Marcantonio Raimondi’s works (Raimondi being one of the first artisans to systemize engraving and to reproduce other artist’s paintings as engravings), wittily referencing his influential role in the advent of the reproductive print by reproducing his own work. While Quaytman’s “chapter” is at once site-specific to Venice, it also unfolds aesthetically to a sensitive viewer: the back of a canvas board screenprinted with the image of a Venetian sunset is painted bright yellow and casts its bright, flaxen hue upon its wall; the unique, striped sides of the artist’s composition boards appear as interloping triangles in nearby works. Superbly produced and almost too resolved, Quaytman’s works operate as a language in and of itself.

Similarly referential to Renaissance masters yet sophomorically crowd-pleasing were Urs Fischer’s untitled wax sculptures or “candles” found in the Arsenale. Two minor life-size wax sculptures of his studio chair and his friend the artist Rudolf Stingel cower under a mammoth reproduction of late Renaissance master Giovanni Bologna’s 1583 sculpture “The Rape of the Sabine Woman.” Due to its complex interwining of forms, Bologna’s sculpture has long been noted as one predicating later canons of sculpture. The act of reproducing it in wax and allowing it to burn provides a slightly compelling but ultimately easy commentary on the mutable, oft-overlooked presence of historical forms in contemporary artistic practice.

Swiss artist Pipilotti Rist exhibits three kitschy framed LED screens featuring static 18th century scenes of the Venetian cityscape (which looks fairly similar to its 21st century version) superimposed with video footage of floating underwater bodies, hospital beds, and charged scenes from other parts of the earth (such as Masjid al-Haram in Mecca). Rist has a propensity for obliquely collaging together such charged imagery that would normally be disregarded as easy or shock-value in a way that allows for its extended consideration. 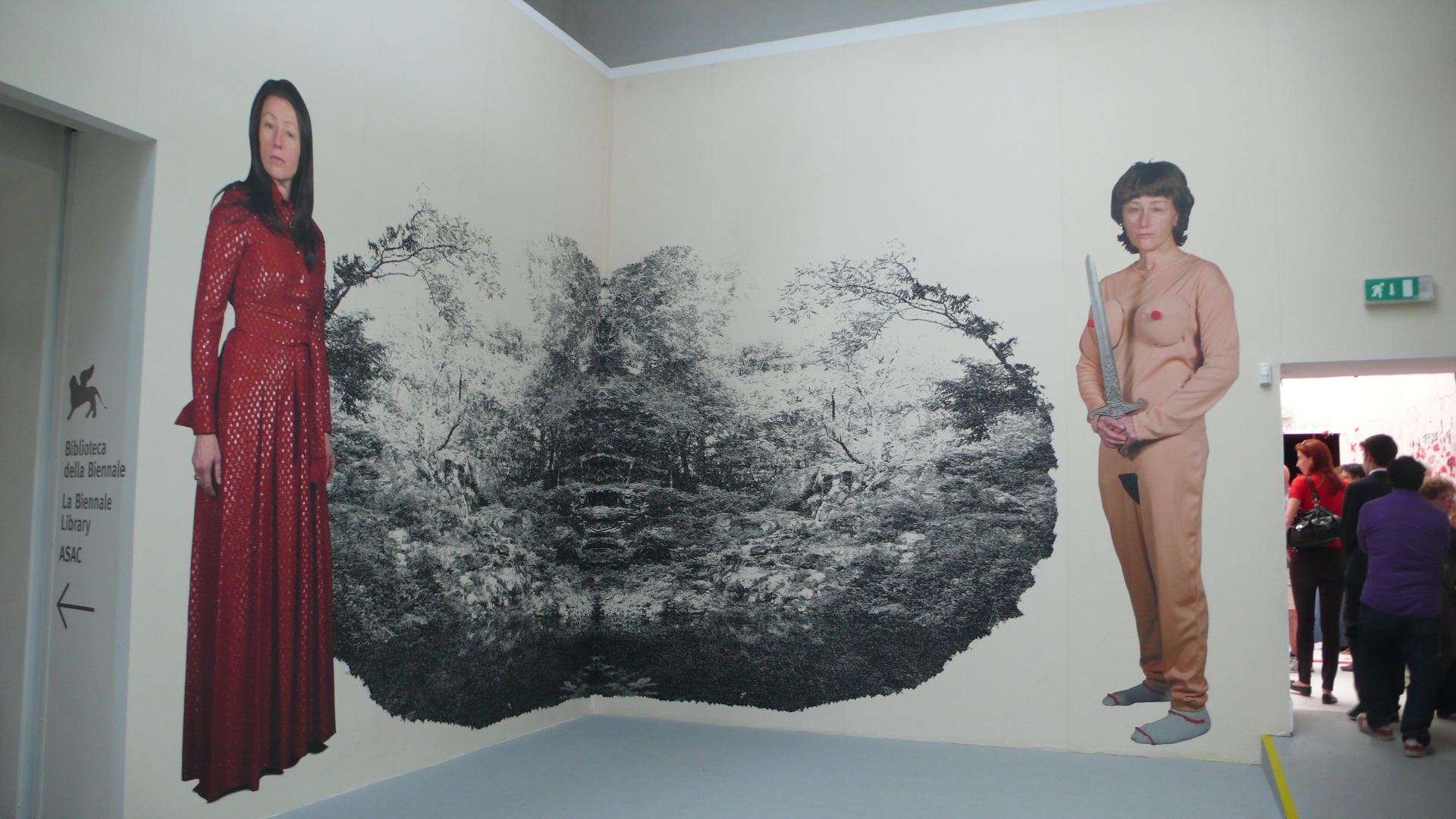 Also strangely matching kitsch with historical imagery is Cindy Sherman’s new vinyl wall coverings. Featuring the artist clad in costume, typical of her oeuvre, Sherman outdoes herself by donning bizarre, cheap ensembles referencing at once the feudal era and 70’s disco, one including herself in what appears to be a felt bodysuit of a naked body holding a cheap plastic sword. These figures are situated next to mirrored, monochromatic Victorian-looking landscapes that appear vulvar and pixelized similar to a bitmap image. Though Sherman’s impetus remains evasive similar to Rist, I would garner that the artist is interested in the donning of fluctuating identities in the land of the digital.

The depths of the Giardini’s Central Pavilion finds new renditions of Seth Price’s vacuum-formed plastic rope compositions. Here Price references Belgian artist Marcel Broodthaers’ vacuum formed plastic signs from the 1960s, which often deconstruct the language of advertising in the form of rebuses. The knotted rope, often falling from the back of its plastic adherent, seemingly represents a complex thought or problem to “untangle.” These new compositions are superimposed with images of painterly bits of scanned, ripped paper or slapdash illustrations, pointing to the process and tribulations of image making. Titles such as “Yum,” and “Noodles” signal an unexpected interest in the phraseology of food advertising—that strange commercial practice attempting to overturn the subjectivities of one’s palette. Although it seems impossible to connect all the dots in this work, perhaps here Price makes an analogy between the ways we express taste in food, commercially or otherwise, and the methodologies of taste in art.

At the Swiss Pavilion in the Giardini, Thomas Hirschhorn’s schizophrenic installation “Crystal of Resistance” provides much food for thought but also alienates its viewer with its brash earnestness. Raw crystals are taped onto disused cell phones, brightly colored chairs, beer cans, walls, and other items. Television screens taped to columns in the pavilion’s center display images of gore while banners above read totemic statements such as “WE DEMAND FOR ALL THE RIGHT TO OPACITY” and “WE MUST FIGHT AGAINST TRANSPARENCE [sic] EVERYWHERE.” I’m assuming these statements are tongue-in-cheek, as Hirschhorn writes in his statement for his website on the project, crystalofresistance.com, that “I believe that art is universal, I believe that art is autonomous, I believe that art can provoke a dialogue or a confrontation - one-to-one - and I believe that art can include every human being,” and most tellingly, “Can my work engage - beyond the art audience - a 'Non-exclusive Public'?” Although Hirschhorn may have gone a bit overboard to some, the artist’s ferocious political motivations, albeit a little confused, provide a nice reprieve from the tame neutrality of the rest of the Biennale. 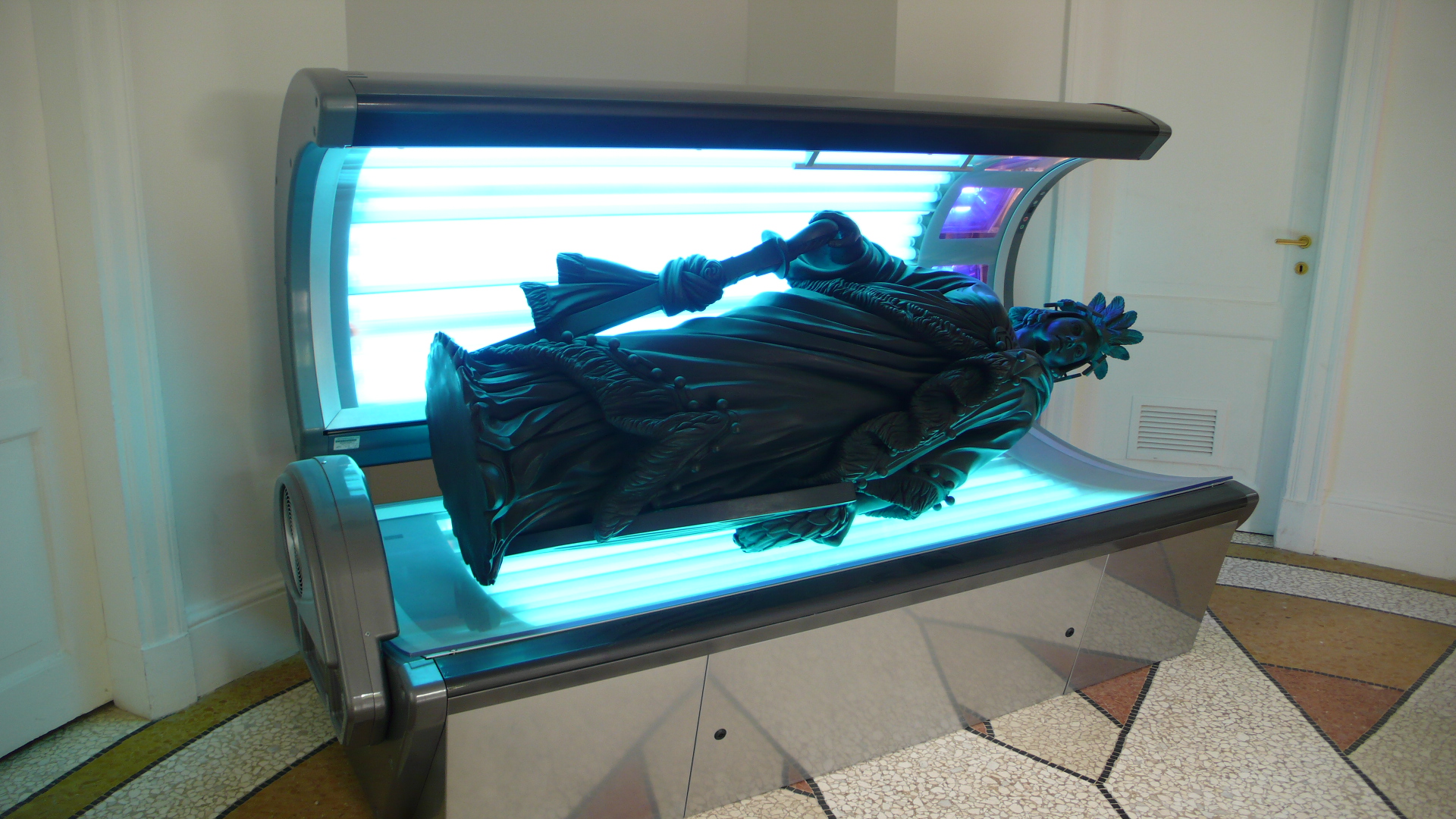 Allora and Calzadilla, "Armed Freedom Lying on a Sunbed" (2011)

Representing the US in the Giardini this year is the duo Allora and Calzadilla, whose oft-heavy-handed, uneven presentation begins with (another) neoclassical sculpture, a reproduction of the 1863 19.5 foot Statue of Freedom which perches the Capitol dome, laid upon a tanning bed. The juxtaposition with nationalism and political power and narcissism is an obvious one, though more complex is their performance featuring gymnasts interacting with wooden sculptures of first-class jet interiors. Clad in a US-flag themed leotard, the rendition of the performance I witnessed comprises a young female gymnast first proudly flourishing her wrists, as if just finishing an Olympic routine, eventually progressing into an intimate displays of agility and balance as her body gradually wore tired. Titled “Body in Flight,” the performance may suffer slightly from its obviousness but deserves recognition for calling into question the internationalism of the biennale as well as the flourishes and feathers we don to communicate ineffable notions of nationality.

Herein lies the irony of ILLUMInations: in order to consider the effects nationality has on the production and reception of art one must exist at an international, jet-setting level. While it is the role of the biennale to act in a macro, international modus, it feels contradictory to usher in artists with the politically-motivated key word of “nationality” and not fully consider the market that brought them there, or actually cogently politicize the phenomenon while it’s physical context is couched in waves of prosecco, massive egos, and billionaire mega-collectors’ mega-yachts. Perhaps biennales, especially ones as slick as Curiger’s, should stop attempting to enact humanitarian work in such a lavish context suited only for the wealthy—those who largely control the hegemonies that contemporary art supposedly calls into question. Despite this major oversight, Curiger does display decent taste in art presented, at least taste that exemplifies a knowledge of international art world happenings that act arguably as a barometer of quality.

Meanwhile, there is a trend in referencing the aesthetics from a distant past, specifically the Renaissance, which calls into question our condition as contemporary individuals anchored by nothing but an increasingly quickened pace of living. Whether this calls for a return to slowness or an appreciation of humanity, or augurs a major shift in cultural praxis, I’m not sure, but it seems ultimately at odds with the impersonal nature of the biennale context.