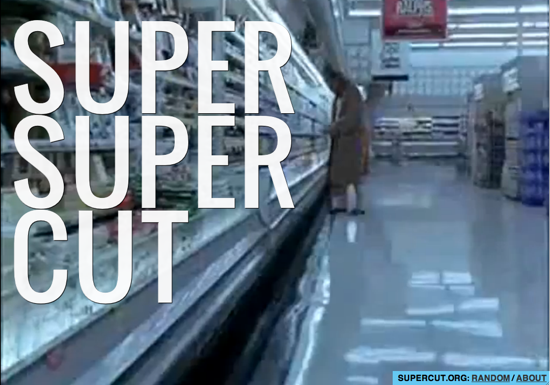 Andy Baio was paired with Michael Bell Smith at last Saturday's Seven on Seven. Today he writes about his experience creating supercut.org for the event:

When we first started work on Friday morning, Michael and I started brainstorming what we wanted to accomplish: something visual, high-concept (i.e. explainable in a tweet), and hopefully with a sense of humor.

We quickly realized that our interest in supercuts was fertile ground. Michael's work often touches on structural re-edits and remixes, such as Oonce-Oonce, Battleship Potemkin: Dance Edit, Chapters 1-12 of R. Kelly's Trapped in the Closet Synced and Played Simultaneously, and his mashup album mixing pop vocals over their ringtone versions.

Both of us were fascinated by this form of Internet folk art. Every supercut is a labor of love. Making one is incredibly time-consuming, taking days or weeks to compile and edit a single video. Most are created by pop culture fans, but they've also been used for film criticism and political commentary. It's a natural byproduct of remix culture: people using sampling to convey a single message, made possible by the ready availability of online video and cheap editing software.

So, supercuts. But what? Making a single supercut seemed cheap. I first suggested making a visual index of supercuts, or a visualization of every clip.

But Michael had a better idea — going meta. We were going to build a SUPERSUPERCUT, a supercut composed entirely out of other supercuts. And, if we had time, we'd make a dedicated supercut index...