The New Museum and Rhizome are pleased to present THE TABLE. THE TABLE is a 5-hour day-into-night performance by DJ/producers Kingdom (Ezra Rubin), NGUZUNGUZU (Asma Maroof & Daniel Pineda), and Total Freedom (Ashland Mines) in collaboration with Wu Tsang. Presented by Wu Tsang as part of his residency We Remember Stories, Not Facts, THE TABLE is a live performance/webcast that brings together a group of artists who believe in DJing as an art form. THE TABLE places the four DJs on four opposing sides of a table in the middle of the floor. The artists face each other, working together and/or against each other to produce a constant stream of ad-libbed new ideas in sound. The unusual set-up gives the audience an unconventional role as co-conspirator, huddled around the table like students at a schoolyard brawl. The particular placement of the table uses bad feng shui to pleasantly disrupt our experience of entertainment and hospitality. THE TABLE is part of an ongoing series of parties/sound/experiences that began in Los Angeles.

KINGDOM, aka Ezra Rubin, is a DJ/Producer living in Los Angeles. Ezra's work is held in high regard around the world for its completely individual, almost otherworldly, character. Ezra has official releases on Fools Gold, Night Slugs, and Acephale and more to come on his own Fade To Mind.

NGUZUNGUZU is a DJ and production duo from Los Angeles. Their production work has been featured by artist like MIA, Sam Sparro and Rye Rye. In 2010 they had official releases on Silverback Recordings and Innovative Leisure. A release of new work is slated for early summer on Kingdom's imprint Fade To Mind.

This event is part of the RE:NEW RE:PLAY Performance Residency Series. 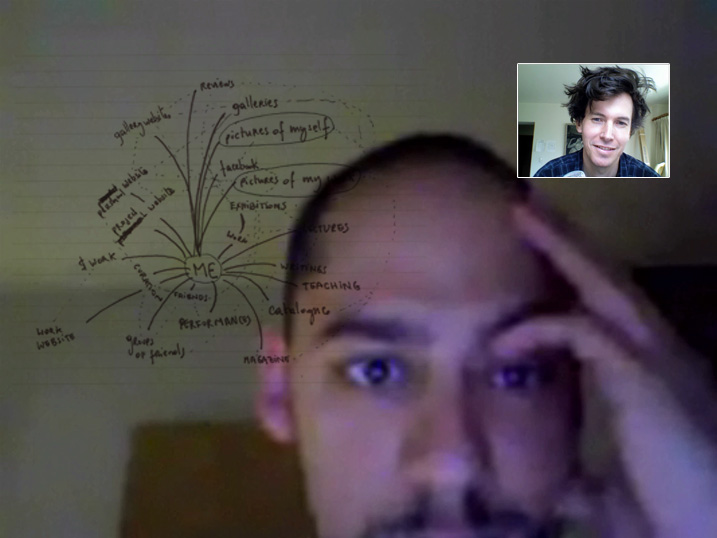 Jeremy Bailey and Antoine Catala are two artists who have both taken interest in the webcam as a medium and a subject, from divergent perspectives. Bailey, who lives in Toronto, creates webcam performances in which he manipulates animated models while spinning out monologues with a nerdy lack of self-awareness --both excessive, even grotesque, challenges to assumptions of transparency in screen and self. Recently, Bailey has been experimenting with thought-controlled technology, devices that respond to readings of their users' brainwaves, to imagine one extreme that future telecom technology might take and to satirize art-critical cliches about the uniqueness of the artist's mind and works that make the artist's process transparent. Catala, a French artist based in New York, has made sculptures using television as readymade, a treatment of the medium that applies to the material of the monitor as much as it does to the images of whatever channel it happens to be tuned to. For Catala, lifecasting -- the practice of non-stop transmission of oneself via webcam -- represents both the movement of broadcast technology from the professional studio to the home as well as a concentrated instance of the constant self-design and performance that the social internet requires -- a demand that he, like most artists who make their work available online for market and exhibition systems, feels particularly acutely. On June 24, Bailey and Catala will present new works drawing on these recent areas of study. This event is curated by Brian Droitcour.

This event is part of Rhizome’s New Silent Series at the New Museum.