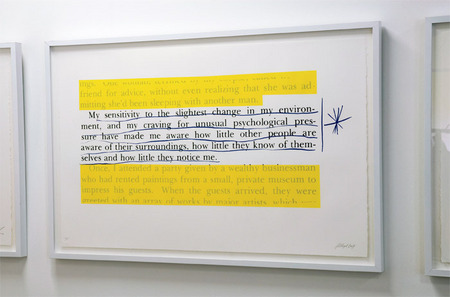 Pamela M. Lee writes about Jill Magid and Trevor Paglen as artists who "interrogate and dramatize what could be called the mechanisms of contemporary secrecy," in a long essay in this month's Artforum:

The past several years have seen the development of a certain kind of practice, represented by artists such as the late Mark Lombardi (with his diagrams of the systemic and insidious connections that link the protagonists of global power networks) and the Web-based initiative They Rule (with its own cladistic representations of American elites), that visualizes those covert relationships of power that obtain among corporations, government agencies, and private citizens. But the focus of this essay is the work of Jill Magid and Trevor Paglen, whose distinct practices converge around the logic of the open secret. Both artists interrogate and dramatize what could be called the mechanisms of contemporary secrecy. For her part, Magid’s practice literally performs the rituals of concealment and exposure. In “Authority to Remove,” her 2009–10 exhibition at Tate Modern in London, Magid charted her long involvement with the Dutch secret service, or AIVD (Algemene Inlichtingen—en Veiligheidsdienst), which culminated in a novel based on years of interviews with intelligence agents. Large portions of the novel were then redacted. Paglen’s work in experimental geography has produced powerful insights into the photographic calibrations between the visible and the invisible, homing in on the sub rosa installations of the American military both on the ground and in the air. His latest show, at San Francisco’s Altman Siegel gallery earlier this year, continued in the vein of what Rebecca Solnit aptly calls “visibility wars” while mining new territory in the history of photography.

Both artists assiduously unpack the secret’s organizational and performative logic, its murky procedural techniques, and the alternations between the open and the hidden that sponsor its occasional emergence into public view. But perhaps what Magid and Paglen ultimately disclose, if in very different ways, is that lies and truth claims occupy surprisingly proximate territory on the spectrum of redaction and disclosure; and that the very notion of evidence as fact undergoes a radical mutation where the blurred interests of transparency and secrecy are concerned—now more than ever, given that the politics of information has taken on a startling urgency.