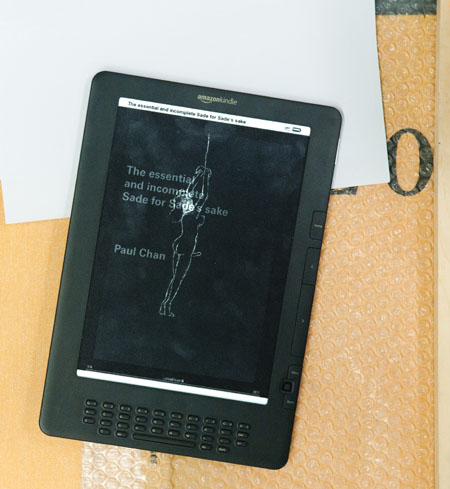 No one mistakes a Kindle for a codex any more than they might an iPad for a canvas – that much is clear. Yet the impact of electronic publishing on the book itself is becoming increasingly relevant to the art world, where the recent advent of art e-book publishing has posed an entirely new set of challenges – technical, philosophical, political and otherwise – to the artist’s book.

In the autumn of 2010, artist Paul Chan launched a publishing venture, Badlands Unlimited, out of his Brooklyn studio as a means of negotiating the rapidly shifting relationship between physical and virtual methods of book production. Aided by a cohort of designers and developers, Chan has since published a small catalogue of books, DVDs and artist-designed ephemera, rendered in both digital and print forms. ‘We make books in the expanded field’, claims the company’s website, a deceptively simple mission statement that belies the implications of re-calibrating an entire process – and by proxy, the history of a genre – in order to broach the digital divide.

E-book publishing complicates the interplay between the image and virtual page; the limitations imposed by code and hardware alone necessitate a somewhat radical re-thinking of that relationship. For an image-heavy e-book to retain its visual legibility across platforms, its author must consider the image in service of the electronically produced book and not the other way around. Hallmarks of a well laid-out publication – a strong correlation between text and image; a sense of visual rhythm; considered choices in typeface, paper stock, printing and binding methods – are impossible to replicate in some cases, and in others elusive at best. Whereas the printed book bears its maker’s mark more readily, the e-book places a comparatively stringent set of limitations on the endeavour from the outset; software and hardware developers dictate the platforms and products that publishers have to negotiate with during the production process.

— EXCERPT FROM "OFF THE PAGE" BY SARAH HROMACK, FRIEZE ISSUE 139.