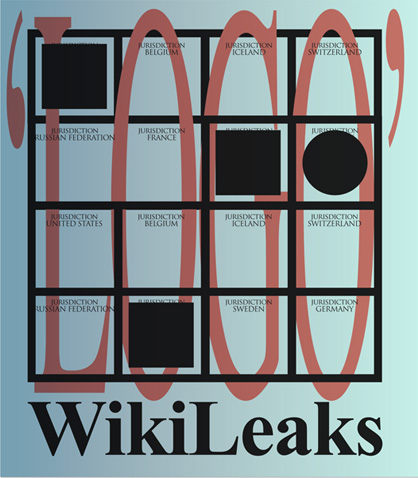 Metahaven
HUO: So they were literally erased from the digital archive?

JA: Yes. The Guardian pulled three of the stories. The Telegraph pulled one. And there are a number of others. If you go to the former URLs of those stories you get a “page not found.” It does not say that it was removed as the result of a legal threat. As far as we can tell, the story not only ceased to exist, but ceased to have ever have existed. Parts of our intellectual record are disappearing in such a way that we cannot even tell that they have ever existed.

HUO: Which is very different from books, or newspapers, when some copies always survive.

JA: Right. It’s very different from newspapers, and it’s very different from the Great Soviet Encyclopedia. The current situation is much, much worse than that. So what is to be done? I want to make sure that WikiLeaks is incorruptible in that manner. We have never unpublished something that we have published. And it’s all very well for me to say that, but how can the public be assured? They can’t. There are some things that we have traditionally done, such as providing cryptographic hashes of the files that we have released, allowing for a partial check if you have a copy of a specific list of cryptographic hashes. But that’s not good enough. And we’re an organization whose content is under constant attack. We have had over one hundred serious legal threats, and many intelligence and other actions against us. But this problem, and its solution, is also the solution to another problem, which is: How can we globally, consistently name a part of our intellectual history in such a way that we can accurately converse about it? And by “converse” I don’t mean a conversation like we’re having now, but rather one that takes place through history and across space. For example, if I start talking about the First Amendment, you know what I mean, within this current context of our conversation. I mean the First Amendment of the United States. But what does that mean? It’s simply an abstraction of something. But what if the First Amendment was only in digital form, and someone like Nadhmi Auchi made an attack on that piece of text and made it disappear forever, or replaced it with another one? Well, we know the First Amendment is spread everywhere, so it’s easily checkable. If we are confused in our conversation and unsure of what we’re talking about, or we really want to get down to the details, it’s in so many places that if I find a copy, it’s going to be the same as the copy you find. But this is because it’s a short and very ancient and very popular document. In the cases of these Nadhmi Auchi stories, there were eight that were removed, but actually this removal of material as a result of political or legal threats, it’s happening everywhere. This is just the tip of the iceberg. And there are other forms of removal that are less intentional but more pernicious, which can be a simple matter of companies going under along with the digital archives they possess. So we need a way of consistently and accurately naming every piece of human knowledge, in such a way that their name arises out of the knowledge itself, out of its textual, visual, or aural representation, where the name is inextricably coupled to what it actually is. If we have that name, and if we use that name to refer to some information, and someone tries to change the contents, then it is either impossible or completely detectable by anyone using the name.

And actually, there is a way of creating names in such a way that they emerge from the inherent intellectual content of something, with no extrinsic component. Now, to make this a bit clearer, look at URLs as a name for something. There is the text for the King James Bible in Project Gutenberg, as a URL. It is the short, convenient name for this—we pass it around, and it expands to the text of the King James Bible. The problem with URLs is that they are authority names. A URL goes to some company or organization, and the name is completely controlled by the company or organization, which means that Project Gutenberg could conceivably copy the Talmud over the King James Bible but the “URL name” would remain the same. It is simply up to the whim of whoever controls that domain name.

JA: Exactly. We all now suffer from the privatization of words, a privatization of those fundamental abstractions human beings use to communicate. The way we refer to our common intellectual record is becoming privatized, with different parts of it being soaked up into domain names controlled by private companies, institutions or states.

And we could have a sort of deliberate, pernicious change, like someone replacing “King James Bible” with “Talmud.” Of course, that is unlikely to happen, but it is more likely that these companies will simply stop caring about that information. It no longer becomes profitable, or the company goes under. Or you have an important archive, and powerful figures are simply removing bits of history. So I’ve come up with this scheme to name every part of our intellectual history, and every possible future part of our intellectual history. And you can actually see the desire to do this as already being expressed in impoverished forms. When you look at something like TinyURL, or bit.ly, or one of these URL shorteners, you see that they are creating a short name from a longer and less comprehensible name, which is a URL. And those longer names are also short names or abstractions of whole texts, like the King James Bible.

We can also see it with dot-coms. Why shouldn’t URLs be company, type of company, then, say, Coca-Cola? It could be us.beverages.company.Coca-Cola, right? But instead we just have coca-cola.com. We just go straight there with one word. And so, in our human language, we use words in such a way that we don’t need to constantly provide a map with everything we say. Instead of having a big tree, it’s a flat name space. Similarly, services like TinyURL are popular because it’s just enough to get there. So my scheme is to pull out of every transmissible piece of intellectual content and intrinsic name that is mathematically bonded with that content. There’s no registration, no server, no company that controls the coupling between a particular name and a piece of information. For example, for Project Gutenberg, a number of domain name registrars and Project Gutenberg itself couple the URL to King James Bible. And when you pass around that URL, you are actually passing around a dependence on the authority of the whole domain name system, and the dependence on the authority and the longevity of Project Gutenberg itself.