All of these materials relate to the video--a 3d visualization of "Dogville" from Lars von Trier's film--which is the only component of the work that I produced. It was meant to be a piece by itself but I did not think it was good enough. Sometimes the making-of is much more interesting than the work itself or the piece makes only sense in the context of it's creation. As I was researching about the film, I found out that the inspiration for the script was a song called "Pirate Jenny" performed by Nina Simone, which Trier had accidentally heard. The song was written in 1928 for Bertolt Brecht's Threepenny Opera. It's about a wash-girl who is ignored and abused by society. One day, pirates arrive and take over the town. Jenny is placed in command and she orders the pirates to kill everyone. Everything went form there on. Digging deeper into research, tracing back the sources and influences, inspirations, past and current connections, technical tools, the biennial as the exhibition context, etc. The ocean was added at the end, after I had a dream about it. On the finished website, no hierarchy was applied to the sources, that's how things exist online.

The description in the source code for your site includes a quote by Archbishop Wulfstan from 1014 about the world “getting closer to its end.” What inspired you to include this quote and how does it relate to your work?

“In Switzerland they had brotherly love, five hundred years of democracy and peace, and what did they produce? The cuckoo clock!”

You’ve worked with ideas of dislocation, erasure of history, and political inequity. In Turbo Sculpture you present VVORK’s 2009 IMG MGMT essay as a narrated video slideshow. Outside of this specific historical phenomenon do you think the concept of Turbo Folk extends beyond former Yugoslavia and occurs currently in other countries?

VVORK got asked to write something for Art Fag City, and since none of the guys had time and I was already researching this subject, I ended up writing the essay, which I later turned into a video. One can find Turbo-Culture everywhere from Las Vegas to Macau, but Turbo is much more politicized in former Yugoslavia.

Srđan Jovanović Weiss writes the following about Turbo Architecture: “The condition that further separates Belgrade architectural doom from say Greek or Florida kitsch, is precisely the political and social context in which the constructions occurred.” He goes on: “What differentiates Serbian Turbo from architectural amassment of kitsch in California, Florida or Long Island is that the latter is quintessentially apolitical. Neither official nor public resistance is projected over these mansions in the US; while in Serbia, urban and intellectual resistance was immense, defiant and defining.”  Of course he is talking about Serbian architecture in the 90s and I came up with the term in 2009. Maybe the more precise name for these sculptures would have been  “Neo-Turbo”. Turbo-Culture changed after the fall of Milošević in 2000. It lost some of the negative characteristics like nationalism and xenophobia, while hanging on to the same stylistic identity.

Your work often includes a multitude of sources, often with limited or no attribution - unless an image is watermarked, for example. In your opinion, should artists who source from the internet be free to use any content they can capture?

They should do whatever they want. Recently, during a studio visit, a curator was very concerned about the news tracks I gathered for my “19:30” project. Since I only had the rights to play the tracks in a exhibition context, how was I to make a party in a club where these tracks would be DJ’d?! My answer was that if we had no choice but to listen to this music, sometimes 10 or more years hearing the same track on daily repetition, than we had all the right to at least dance to it. 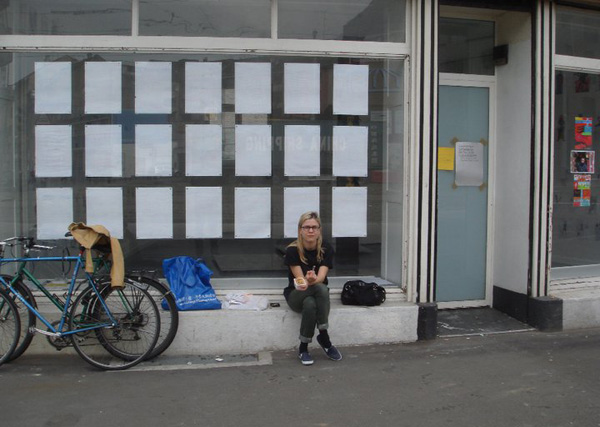 How long have you been working creatively with technology?  How did you start?
I joined a computer club at school when I was 8. I was the youngest and the only girl, there. We were programing the computer to draw the Olympic circles. I did not completely get it but I think I knew more about programing then, than I know now.

Describe your experience with the tools you use.  How did you start using them?
My older brother introduced me to computers and internet. I don't fetishize or love computers. They were there so I started using them, also out of fear not to stay behind.

Where did you go to school? What did you study?
I went to high school for design and photography in Ljubljana, studied architecture for a year in Ljubljana and then graduated in design in Vienna.

Are you involved in other creative or social activities (i.e. music,writing, activism, community organizing)?
Drumming and lots of sports.

What do you do for a living?  Do you think your job relates to your art practice in a significant way?
I don’t support myself I am supported.

Who are your key artistic influences?
Yugoslav socialist cartoons and 90s music videos.

Have you collaborated with anyone in the art community on a project? With whom, and on what?
With VVORK on curating shows and events.

Do you actively study art history?
Usually only project specific.

Do you read art criticism, philosophy, or critical theory?  If so, which authors inspire you?
I read more fiction and history than theory. Some of the recent inspiring texts I read were from Chris Kraus, Julian Assange and Renata Salecl.

Are there any issues around the production of, or the display/exhibition of new media art that you are concerned about?
It should be exhibited more frequently in commercial galleries and sold.