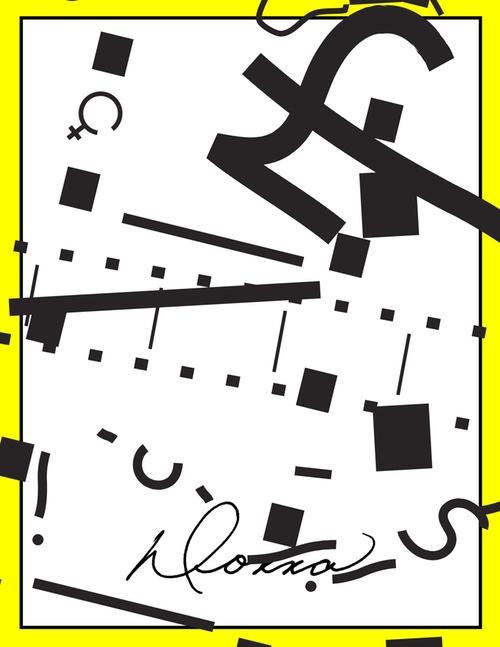 Lauren Cornell: Donna Haraway's Expanded Benefits Package is set in what you describe as "the compounded space of artist studio / gay bar / queer community center." Is this triangle of social spaces one that relates to your life? How will the choreography of the piece reflect and express this location?

MATTHEW LUTZ-KINOY: In this performance I propose that the individual creates the narrative of the social space and that the social space constructs the narrative of the individual. The set of the performance is constructed in video by superimposing footage from these locations on top of one another and the role of the set shifts between being a forgrounded character to a background for live action and music. For this piece I chose to frame my research within a compounded architecture of the locations that had a direct influence on the production of this work. These locations shaped my daily gesture, they propose the way one’s body interacts with the world. My choreography is based in the quotidian experience of those dynamic locations I found myself inspired.

LC: Will you unravel the title for us?

ML-K: Donna Haraway's Expanded Benefits Package is a collaged title that comes from the research that formed this project. It allows an effortless play into the connection between Haraway’s narrative fictions and historic expanded cinema practices. Relations of the body to time-based technologies are a manifestation of ‘ways of being’ on the horizon. Haraway expresses this with agency in her famous cyborg feminist manifesto regarding the post-human frame and the permeability of her “elsewhere” into everyday life. My emphasis on the strategic and real “Benefits Package” comes from an interest to push forward and promote the marginally explored body of expanded cinema. The dynamic figure of moving image that expands the projection sits closely on that horizon to the impossibilities and contradictions of a “natural” world. We must look back at the practices that influence our own history in the arts, especially regarding a relationship to moving image. As Jackie Hatfield states in “some reasons for a review of the avant-garde debates around narrativity”: “Because what actually went down was totally different.”

LC: One of the first performances of yours I saw involved you dancing on a life-sized love letter, a performed version of Lifting Belly at the Kunstverein in Amsterdam. It was, at turns, full of joy, full of critique of emotional expression as it is performed, and very witty. Can you talk about how DHEBP evolves out of your practice, and perhaps how it differs from its original version?

ML-K: Ah! Lets talk about pleasure! This piece is a point of return in the process of documenting and re-presenting a collection of performances using video, sculpture, and live action. DHEBP compounds the accumulation of that material and creates a new social space that is made real by the audiences viewing.

This assumes that a work when presented is always mixing a new context, it is extraordinarily sensitive, and could not be any more wrong than right. My presentation’s temporality is only strengthened and complicated due to the relationship to pre-made and pre-recorded materials. This featured moment is layered in representation and experience; it is a space of so much joy, highlighting the pleasures of emotion and memory.

LC: SOPHIE is providing the music for the performance, which is played both in the video and live. When did you two start collaborating, and why this music in particular?

ML-K: SOPHIE and I began collaborating in Berlin in 2008 with a band called Motherland. We recorded two EPs and performed constantly for a year and a half at night clubs; we got to perform at the Hayward gallery in London, and even at the Kunsthalle Baden-Baden, who do such a great job. Then, last summer at the Socrates Sculpture Park I used an instrumental track from Motherland to choreograph a short dance piece, Future Fabrics. I realized at that moment the integral strength of presenting original music from my close community within the frame of my art practice. I am more interested in a combination of SOPHIE’s music with my own work à-la Cunningham/Cage, so here I provide a layering of these two elements rather than a harmonious or synchronized structure. SOPHIE’s music is invested in producing new combinations of sounds; taking pop elements and elaborating on their best qualities to create an ultimate pop music. The music is located in a future space by structuring itself within the quotidian which compliments my interests in queer horizontality. The music presents constant surprise; it is thrilling to feature this live set. People are going to freak out.