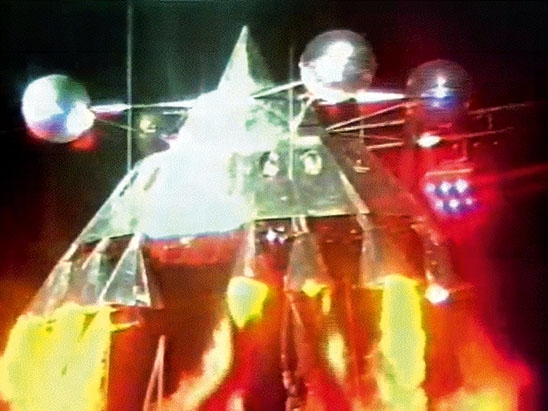 Still from The Mothership Connection, 1974.

Terence Gower’s New Utopias is, as Bomb magazine describes, a lecture "filmed in the style of a 1950s Walt Disney documentary. Among the utopias under analysis are Parliament/Funkadelic’s 1974Mothership Connection tour in which George Clinton proposes to improve the world by bringing us The Funk from outer space; The Rocky Horror Picture Show, where a society promotes uninhibited sexual behavior; and the world of Jacques Demy’s Les Demoiselles de Rochefort, an aesthetic utopia of beautiful artists who are perpetually falling in love." Pedro Reyes interviews him for the magazine, which also includes a clip from the film.

Pedro Reyes I got so excited when I saw New Utopias because it’s not stuck in nostalgia; it’s a prognosis, a promise, an invitation to reimagine the world. The key line in the video is the last sentence: “I’m curious to see what new visions of utopia will replace these.” I’d like to ask you how the three utopias in the video—the funk, the meta-sexual, and the cheerful musical utopia—tap into the viewers’ desires. Desire is a driving force for change, as Augusto Boal wrote. Without desire, you focus on the problem; with desire, on the solution. You have to desire the change you want to see. That’s the intoxication of utopia.

Terence Gower Exactly. New Utopias is about the attraction of ideals, the desire to move toward them. The three utopias I feature are about pleasure. Desire serves two purposes here, to trigger progress and change (by enacting a utopian response) and to entertain (as a catalyst for the viewer to enter the work)—hence music, sex, and architecture. I wanted to feature the most diverse and unlikely examples of ideal societies, partly to be funny (pleasure again), and partly to stretch the boundaries of what utopia could be.