"While traveling sideways at 110 KM an hour, I realized that the order of videos on the internet emerges out of a far greater chaos,“ London-based artist Jon Nash tells me on a busy Marrakech street corner about his accidental collision with a traffic barrier in his performance work, Morocco Drift. Later at the artist dinner, Berlin-based artist Aleksandra Domanovic tells me the story of how her sculpture Monument to Revolution was moved to make way for the Princess of Morocco in CyberPark. With the stories adding up, it was obvious Higher Atlas, the 4th edition of the Marrakech Biennale, curated by Carson Chan and Nadeem Samman, was no ordinary foray into exhibition making.

Miles from the nearest white cube in Casablanca, set in a city known for its historical attractions and film locations, Higher Atlas unexpectedly set artists on an unusual fittest test. Building an exhibition to be experienced first hand, the curatorial duo commissioned artists to fashion new, site-specific works derived from local influences. However this curatorial ethos was interrupted by a last minute change of venue. Working from an idiosyncratic vision, a newly elected government opted to move the biennale from the ruins of the sixteenth century El Badi Palace on the Medina’s outskirts (a UNESCO World Heritage site) to the unfinished Théâtre Royal in the Ville Nouveau.

Perhaps because within the confines of its historical sites, Morocco’s tourism board sells itself as an internet bookable chronotopic anomaly. A land of coffee and carpets, spices and slippers set in an alternate Brideshead Revisited reality where EasyJet and Club Med have replaced opiates and homosexuality.

Unfortunately, many of the Biennial’s installs get lost in the new venue's cavernous wings, or are limited in their conceptual reach to begin with. Picking up on sound with secretly sequestered microphones, Tue Greenfort’s Audio System (2011) thrives, but it was shipped in and destined for any environment. Of the newly commissioned site-specific works, it is those by Aleksandra Domanovic, Jon Nash, and Chicago-based Karthik Pandian that fare best. 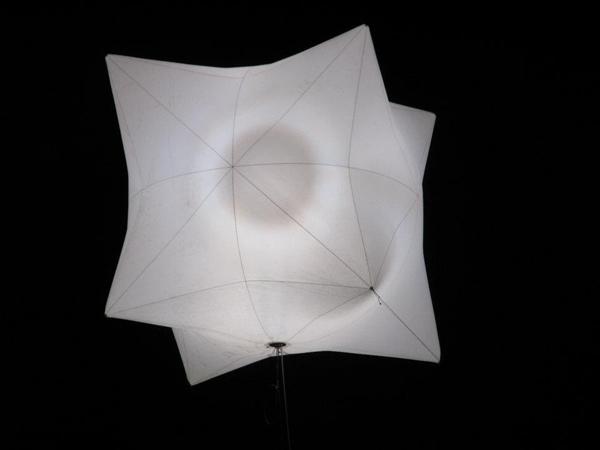 And there in the middle of old Abu Dhabi, I mean, Marrakech, steps off what was the set of Sex in the City 2, Pandian’s Untitled (2012) appears at night above Marrakech’s iconic square, Jemaa el Fna. The square waxes and wanes throughout the day, filling up by night with green stage coaches selling music and juice, pop-up restaurants, vendors of Moroccan goods imported from India, and throngs of tourists searching for an elating experience from old school snake charmers and up to the minute hustlers. Set over this self-conscious public arena, Pandian’s sculpture, drawn from commercial film production, illuminates the multifaceted desires jockeying against each other on the set below, already being filmed by the dozens of cameras brought by eager tourists. Chameleonic, Untitled becomes a leading element in the mass façade’s building narrative.

Domanovic’s pink futuristic looking sculpture appeared in CyberPark like a re-rendered ambassador to an unrealized present. Shortly after, a higher up informed CyberPark’s director that Princess Lalla Salama of Morocco would not like it if she saw such a sculpture directly on her path. Within hours, Domanovic’s completed sculpture was quickly moved by hand by 30+men to a less prominent location obscured by trees. Unbeknownst to Princess, the ersatz monument placed on ‘her’ path after the Biennale’s eviction from El Badi Palace is titled Monument to Revolution. Yet this succession of moves adds to the relay race of dislocations already present in Domanovic’s sculpture modeled after Ivan Sabolic’s 1963 Three Fists Monument. 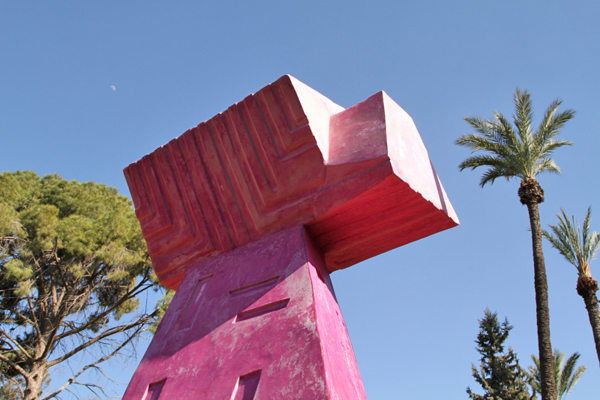 Set on a grassy knoll in Serbia’s Memorial Park Bubanj, Three Fists Monument is an abstract step away from Socialist Realist aesthetics and today stands as a symbolic relic of a dissolved State. Disavowed of its political authority, it has become an ornament, muted of its original significance, as the invented traditions of antiquemania take hold of public architecture in the Balkan States. For Monument to Revolution, Domanovic slims this multi-fist abstraction and phenomena into a single replicable structure, and rubs into it Tadelak, a tool of Moroccan antiquemania and a favored ancient Marrakechi technique to build modern Riads. Set in the crumbling shell that is El Badi Palace, the work was to mimic the wrapping and layering these near ruinous structures over each other to invent the new. Through its subsequent movement into and around CyberPark, a source of hyper-connectivity, the sculpture continues this process on its own, duplicating the dislocation beyond what Domanovic’s could have planned. 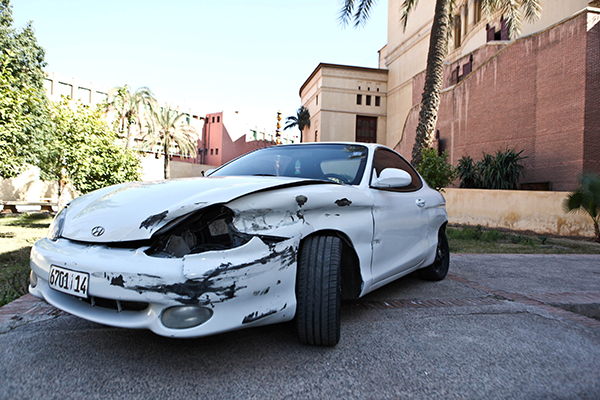 Like Domanovic’s work, Nash’s too underwent a series of positive misadventures. Nash’s Morocco Drift and New Thinking, New Possibilities orient from a macroscopic interest in how algorithms invent public space around key terms, which trend desires viral, and the symbiotic relationship between multi-million dollar CGI adverts and user generated content. But before MIA’s Bad Girls drift video shot in Ouarzazate, Morocco hit the internet, Nash had long been trawling YouTube, finding Moroccan phone cam recordings that refine drift action sequences into spinning tires set to Teriyaki Boyz Tokyo Drift and Justin Bieber. Inspired by the communications of this subculture unacknowledged by the official rhetoric at hand in El Badi Palace, Nash bought a black ’97 Hyundai that Moroccan mechanics handworked into a supped white piece to drive between Morocco’s many feature film locations. At the outset, before the car met its functional end, Morocco Drift was to be a live performance, with a stunt driver burning out the reworked automobile to fashion loops of smoke à la the uploaded videos he’s referencing in the exhibition space, thus bringing a private anti-social experience gone public into a tourism approved public arena.

But in the combination of the car's destruction, and the venue transfer from a quiet ruin to a busy street corner, this conversation with Morocco’s official version of itself faded. Instead, the elevation of Moroccan drifting's full spectrum of possible outcomes into the gallery space taps into the mismatch neitherness that pulses through Marrakech: girls on motorbikes wearing lipstick and terrycloth house slippers in contrast to traditional Moroccan slippers; guys who work in the Souk changing out of a traditional work dress into track pants; Rugby balls covered in faux Louis Vuitton leather. Although a piece on its own, New Thinking, New Possibilities, which takes its title from the Hyundai commercial Nash superimposes his camera phone footage over, functions as a trailer for Morocco Drift. Fortuitously for Nash, by re-inventing the car's ability to perform, and then by loosing control of it in a final drift drama that’ll never make it to YouTube, he re-calibrated his clean cut analytical framework into a messy, intimate process, which oscillated between order and chaos. Morocco Drift manifests as a trace of performative cycles, and becomes a stronger work for it, albeit one that can only be properly experienced in person. 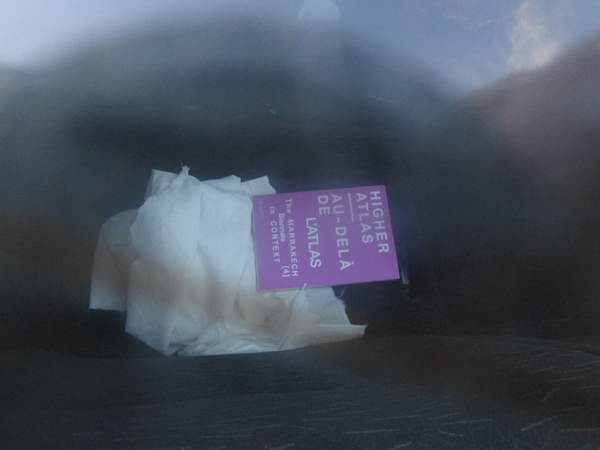 Documentation of Monument to Revolution and Untitled, like Morocco Drift, fail to deliver the critical element of Domanovich, Nash, and Pandian’s works for the Biennale: location, location, location. Integral to experiencing these three works, is experiencing them in their contexts. While Monument to Revolution and Untitled as objects themselves remain intact, these works’ incorporeal existence absorb their audio-visual surroundings, which in turn alter their conceptual base over time. For Morocco Drift, the install soundscape is equally vital, but more crucial is understanding its narrative arc. The in-situ lack of wall labels or information chronicling individual works, albeit done in an effort to make the works assessable to non-specialized audiences, too, disservices them. A disservice which is amalgamated by the catalogue’s relative divorce from the show’s final works. Although it is a common enough circumstance for writing to be completed before works, there is something out of place about it in this instance brokered by so many last minute, and ongoing, transformations.