The Shape of Shaping Things to Come

A weird commotion outside wakes you up. You peer out the window to see the source of the music and revelry. A group of college kids from the engineering school are smashing all of their furniture in the street. The next day while walking the dog, you see them again. They’re sweeping up the pieces of broken housewares, and shoveling it into bags. The next day, it looks like they’re moving in again as they carry brand new designer furniture into their house. They do this every month or so.

You are shopping in Ikea, looking for a new end table, and perhaps a rug. Suddenly, uniformed security guards appear and surround a young woman. She is escorted from the store, uneventfully. “Pocket scanner,” you hear an employee tell an inquiring couple.

With delighted expectation, your son unwraps his birthday gift. Awe is quickly replaced by disappointment. “Isn’t that the one you wanted?” you ask confused, certain that it was the new action figure, ordered directly from the TV show web site. “Yeah, it’s the one,” he says cautiously, not looking you in the eyes. “I just forgot that all the accessories would be un-modded on the store version.” 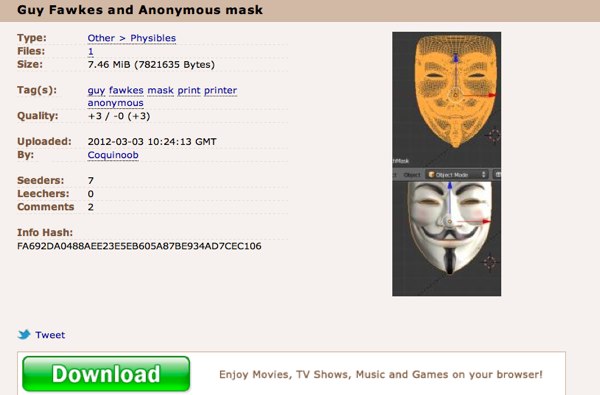 3D printed objects, or “physibles” are an incredible example of the mundane aspects of future-weird. They are glitchy-as-fuck, but their shapeshifting effect on our cultural space will inhabit the same metaphysics of street graffiti— appreciated by only a few, truly understood by even less.

A physible is simple. Download a file with information about the shape of an object, or component parts of an object. Use a 3D printing machine that squirts molten plastic, metal or other material to pour you that object, without needing a mold. Or, send the file to a company who will do that for you. These machines simplify the process of fabbing an object, by using a single machine to create parts of nearly anything. Previously, specific injection molds had to be created for each piece, or a welder had to attach pieces by reading a diagram. Now the machine can build the entire piece in one run, with basically zero set-up investment. The investment to produce a single object is nearly nothing— all it takes is the design, and one of these universal printing machines.

This technical evolution is interesting, but the real revolution will be in the changing distribution of fabrication shops that this production shift will create. Fabrication has been sourced wherever the set-up requirements are cheapest, with the production runs made as large as possible. But the technology behind physibles will make short-run fabrication, anywhere, much more preferable. It will eventually be cheaper for a person to fab one object at home, than to buy one of five hundred thousand made in one place and shipped across the world. Physibles will decentralize the Pearl River, and bring China home.

But the technology of physibles doesn’t mean much to the consumer. Not any more than the encoding of a MP3 file, or the precise stitch pattern of a handbag. It means something to the person who actually fabs the object, but as a consumer, you’ll get your things wherever is cheapest and easiest, just like always. You’ll still order things online. Rather than coming from China, perhaps a Chinese company will outsource the design to a fab shop down the street that will hand deliver it to your door. The means of production continue to mean nothing to the end-user: commodity cost is king. Most people want their stuff to just be stuff, and don’t care about how it works. Consider the frustration people experience trying to get a PDF to print correctly on a flat sheet of paper. These folks will be filling their cabinets, entertaining their children, and brushing their teeth with physibles every day of their lives without knowing how the object came into existence, or what that means for global distribution networks. 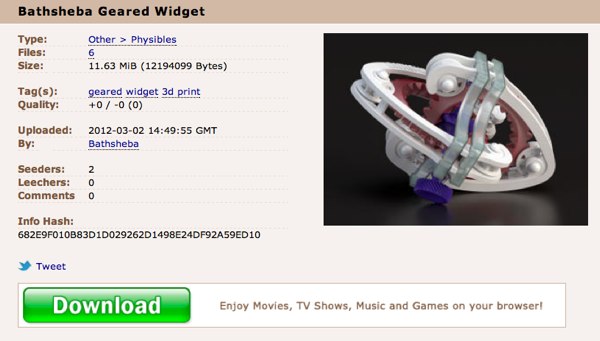 Most people. On the other hand, there will be a new set of object hackers, who will be spending all their free time online, discussing the precise interior dimension ratios of the new set of Target glassware (which, they have discovered, is almost exactly equivalent in volume to a very famous American glass company’s 1940 catalog). Their forums will be filled with discussion of the best way to minimize wind resistance on custom bicycle fenders, while still maximizing spray blockage. Drug paraphernalia will be designed for maximum efficiency, with a willing and ready test market. A new hacker vernacular will be filled with implicit understandings of the integrals of surface area and volume, of curves and angles, of phase change curves and stress tolerances. One more set of bright kids will take a hard tangent outward from the common understanding matrix of “mainstream society”. But if you’re nice to them, perhaps they’ll fab you a custom iPhone case for Christmas.

Of course, there will be people who get into this deep. As 3D printers get cheaper and more functional, there will be folks that just can’t avoid diving head first into this new physical object magic. Even less people will download physibles from The Pirate Bay than download ebooks, but those who do will shape the world for the rest of us. They will be that hot nozzle, spraying our sense of physical existence into reality according to precisely calculated coordinates.

These physible hackers will crave new material. They’ll need stuff to work with and to hack, just like DJs need new tracks to cut up. You’ll see weird looking people in stores, fondling new design products. Measuring them. Pointing lasers at them. Taking cell phone photos from multiple angles. Physible hackers’ creations will remain on the outskirts, like custom-painted skateboard decks, like underground mixtapes. This marginal domain will have its superstars, its up-and-comers, and it’s sell-outs. Retro physible hackers will take up woodworking, just to “make something real”. You’ll be able to tell physible-hackers by their weird stuff. That friend of a friend, whose apartment is filled with contorted lamps and more abstract vases than any 20-something really needs. The girl on the subway platform, with a pair of headphones/cosplay-animal-ears you’ve never seen on anyone else. The freebox on front lawn of that house with the loud music, that occasionally has bizarre, nearly unusable dishware sticking out of it. Is that dishware? Or is a porcelain hat?

This stuff will stay in the fringes, until it somehow becomes cheaper and more appealing than stuff on the shelf. Then you’ll buy modded, open-source objects without realizing it, there being nothing to distinguish them from “real” objects. You’ll see modded objects, and never know that you have never seen the original, just like you hear remixes without ever listening to the original song. You’ll be told in product reviews to search out the “forked” object via this link, rather than buy the real one on Amazon. You’ll click, inquisitively, but the link will be dead. There will be new forms of Digital Rights Management, and new ways around that Digital Rights Management. There will be some amazing innovations in objects that have pretty much been the same for the last one hundred years: pretty ingenious new door stops and mouse traps. A 12 year-old will give a TED talk about how she stumbled upon a new type of eating utensil while doing a homework assignment for some class called “Fab Lab”: whatever that is. Cool Tools will be shut down by a DMCA notice, for failing to cull links to physibles from their comments threads. None of this will matter to you, unless you know what Cool Tools is. 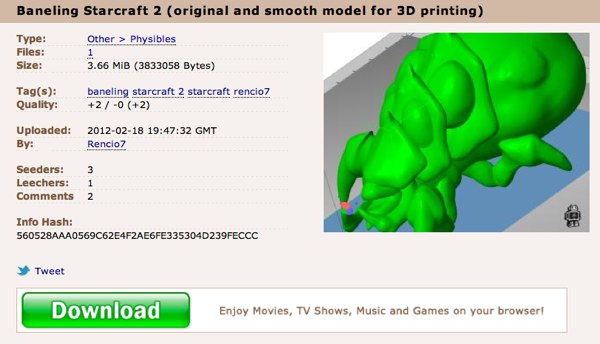 You’ll see “cancered objects”, or other New Aesthetic artifacts on the surface of physical objects. Whereas once we accepted the blobs and seams left by injection molds without a second thought, we will accept the new characteristics of things that physibles provide without knowing it, as the physical semi-error-states of physibles slowly move from bug to feature.

But the production artifacts won’t just be on the surface of the object, in the unique flaws of the actual fab process. Artifacts will grow in our mental conceptions of what things are, and what space is. Our aesthetic sense of negative space will be synonymous to the scattered shot of a 3D scanner’s laser beam. Pixelated curves in physical space will form a low-res, “8 Bit” houseware aesthetic. Inset or missing blips in the resolution of the surfaces of our stuff will be a natural aspect of the college student’s lifestyle. A physible hacker could navigate this newly crystalizing structure of our cultural space. Given enough coffee or booze, s/he could expound for hours on the means of production and the social implication of various bioplastic distribution networks and recycling schemes. But who would really care? Geeks— am I right? Would the plight of minimum-wage object fabbers using carcinogenic printing materials matter to us any more than the suicide pacts of Foxconn workers?

I’m thinking of this as the “mundane future-weird” because while it’s going to be weird, it’s also just going to be resolutely more of the same. Does it really matter how any of the thousands of disposable objects that clog our sense of time and space got to be there? Does anyone care about how things came to be, past their ability to move a shiny-new-something from one set of hands to another, and perhaps make a buck in the process? If there is anything truly surprising about the future, it’s that we are never really surprised when it finally arrives. Nothing springs from the earth fully formed. Everything comes from somewhere--whether from the nozzle of a 3D printer in a hackerspace, or straight from the endless cycle of “capitalism,” whatever that is. Those who know, already know. Those who don’t aren’t likely to be suddenly shocked out of their current state of mind by a table lamp, even if it is smashed in the street. 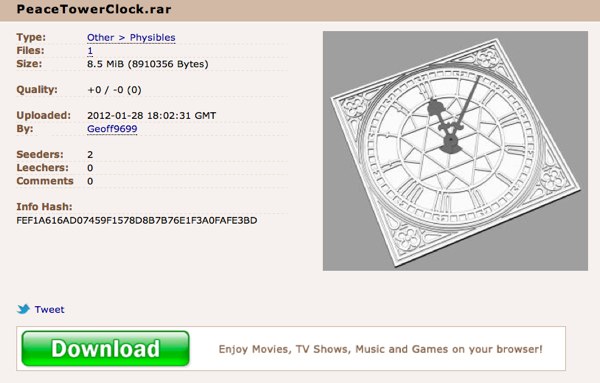 Don’t be disappointed though. If you want really want to see weird, you just have to jump a step ahead. But what about scanning and printing buildings, copying and archiving architecture? What about terraforming? What if the unique drainage contours of a fertile river valley are scanned, and then used to reshape an area destroyed by strip mining, or suffering cataclysmic rainfall increases from climate change? The physible, a file containing the geodetic and topographical information, is beamed to a thousand drone bulldozers. After a week, the land is shaped as easily as using Photoshop’s clone-stamp tool on a Google Map. How about plastic surgery? How about internal surgery? Why have your heart, with a family history of disease, when you could have the heart of a person who lived to be one-hundred and five? Let us fab you a new future, from scans of other futures of the past.