DR: On first inspection, a lot of your work appears to be rooted in the 90s, drawing on the low bandwidth aesthetics inherent in GIFs, midi plugins, embedded frames, ASCII art, and forgotten webring hyperlinks. But the 90s comes out in other ways, too. Pop-cultural undercurrents include Nintendo and Leisure Suit Larry; mixtapes and a particular flavor of Europop. How/why do these things speak to you as a contemporary (Web) artist?

EG: The origin of the meaning of most collected n found elements i use in my work is rooted in the 90s. My work itself isn't rooted in the 90s. I've been dragged to use that type of stuff mostly bc i like it n its accurate w the topics im interested in rn. Still tho the source material or what it evokes isn't really important. It jst adds semantic layer/s for some people n so does the aesthetics. Everything linked to that part of my work is treated as game elements (to be inserted) in different contexts of reception w diff codes of conduct. Its about notebooks. All that content is accessory to my work. You could really jst take the whole structure/s n insert totally diff content. It'd still make sense. Maybe Im already doing that but its not linked anywhere rn. Its kinda like people who enjoy playing Canabalt but hate playing Robot Unicorn. The gameplay is literally the same. Jst the content n aesthetic is different. That changes the whole experience. Whats a contemporary web artist? 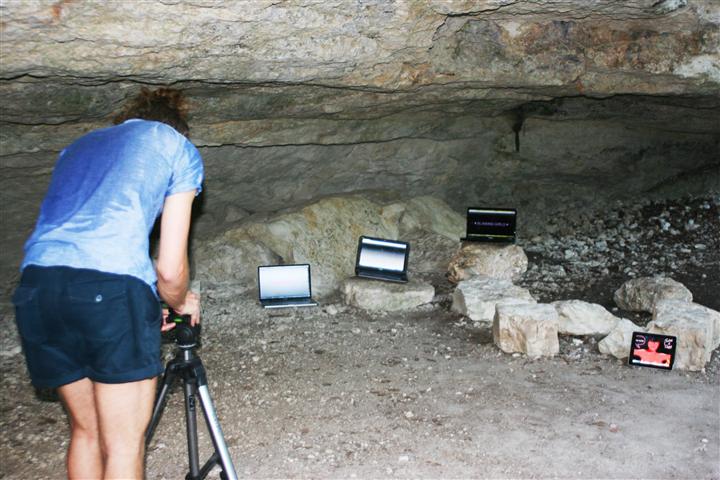 DR: I love the idea of interchangeable (aesthetic) content, as if Andy Warhol could have changed the contents of a "textures" subfolder and suddenly transformed a Campbell's Soup painting into a Heinz. How is play more than a structural component to your work? I'm thinking about rulemaking and breaking, especially your collaboration with Sarah Weis, Blinking Girls Cave, which the park authorities took a disliking to while it was in progress.

[Ed. – Blinking Girls Cave (2012) was a part of Apache Project, a series of artworks installed at Mother Neff State Park in Moody, Texas, in a cave that was once used by the Tonkawa Indians as a shelter as well as a burial site. After an initial proposal for an installation in the cave was rejected by park management (despite having been initially approved), the project ultimately took the form of a photo shoot, in which GIFs—some of them drawn from the imagery in seduction-based adventure game Leisure Suit Larry—were displayed on tablets, smartphones and laptops that were placed within the cave and documented. This scaled-back version also proved unacceptable to park management.]

EG: I think play is a structural component of life. It's related to how i conceptualize, process n think stuff. It opens space for experimentation. To me, its more related to what sociologists do than anything performance art; like how-to approach different types of social dynamics from diff point of view per example. Also, like that Andy Warhol eating a hamburger video; a partly exhibited learning process. Breaking rules wasn't really a thing in ♡ ♥ Blinking Girls ♥ ♡. What happened at Mother Neff is that our first intended installation, which involved light effects n bubble machines, was disapproved at the last minute bc of the damage it could cause to the cave walls. Blinking Girls Cave thus became about hardwares n gifs. During the documentation - that being the installation - Nate Hitchcock, the director n curator n everything at Apache Project, was interrupted by a park ranger who requested him to leave the park because taking pictures n or making videos in the cave wasn't appropriate.

DR: There’s a real sense of a partly exhibited learning process in your URL works: an ever growing array of Web 1.0 motifs, exhibited as unique URLs. For me these works expose the Internet as a spatial, material thing, still begging to be explored. You spoke of sociology, is there perhaps something archaeological in your practice?

EG: The internet is def abt spatiality and materiality. One can relate to these notions differently. To me, its really more abt physicality. I wasn't really thinking abt them topics when i made these. It's jst kinda there in all websites. Thats the internet. I wouldnt say that these r really web 1.0. The user in both cases isnt primarily a content consumer. Backdoor trojan girl was exhibited at Domain Gallery in a way that highlighted the urls. Under other circumstances, it'd prob be different. The archaeological in my practice is kinda superficial rn.

DR: Your URL artworks, http://backdoortrojangirl.net (2012) and http://w-h-a-t-e-v-e-r.net (2013), both flicker between female and male signifiers. Do you think the Web is gendered? How would you approach gender differently in work produced for a gallery context?

EG: I don't think the web is gendered. Culture is n adds gendered filter/s to it in some cases. I don't know if i would approach it; maybe i'd dig a hole for feminists/feminism or i'd do a show about postpostpostpostpostpostpost-transexualism. It'd be really fun.

DR: For your ongoing collaborative online exhibition Art Object Culture (2011-), you and Lucy Chinen bring together two artists each month to create a new work based on trinkets that were purchased online. These readily available objects accrue value as they pass through the project. I could ask you about the long shadow cast by Duchamp’s readymades, about ownership, exhibition value and artistic identity as they relate to the Web. Instead, I’d really like it if you shared some AOC secrets with us. What criteria do you use to select the artists? Which is your favorite submission so far and why?

EM: Art Object Culture offers a website template for artists to explore art making within one rule: create new art objects from items pre-existing in various online stores. We mainly seek artists that have the ability to bend that rule. I don't really have a favorite submission. I like some more than others but my opinion on this is not important. There is no secret. The current format is a translation of our ideas on AOC related topics from 2011. It might eventually mutate. Hopefully we'll sell all the artworks that were made for it before that n or have a show; some kinda showcase for all of them together w everyone that made stuff for it n other people too.

Since forever. I started by playing games on some used pc and recontextualizing movies, game related stuff as improvised play based on the characters n plot/s with friends at school. I've always spent a lot of time randomly surfing the internet while chatting on microsoft comic chat, mIRC, the palace n was really into customizing anything that was customizable ie. winamp skins, mirc themes, etc... Beside that, my fav drawing thing is Lite Bright n i've been deleting, moving, opening files since ive been typing on a keyboard. I've crashed the home computer a couple of times.

Describe your experience with the tools you use. How did you start using them? Where did you go to school? What did you study?

Experimentation n play! My main tool is the internet or jst even information. In college, ive done a dble cursus in literature n social studies. Then, I dropped out of art school in Mtl n went to Paris. In 2010/2011, i did a dnap/bfa in 1yr at the Ecole d'Art Superieure d'Aix-en-Provence where I'm currently finishing a dnsep/master w a focus in hypermedia. My thesis text thing's title is Fuck Privacy Demo Game Over.

I'm not media based. The traditional/non traditional dichotomy makes no sense to me. I jst use whatever depending on the project im working on. It's more about ideas n processes.

I tweet n play music on my iphone everyday. Before that, i played ice hockey n have done some cycling as a summer training thing. I love dancing. Also, health related stuff; superfoods n other stuff, but i mostly eat pizza n candies. Thats creative. I'm involved with adrenaline, gaming, immersive as non immersive n fun everyday. I'm really concerned about open source n how it affects education/academics. But im not seriously implicated in anything, im jst personally into it rn.

I worked at HMV Megastore n Liquid Nutrition in Montreal while being in college. I spent one summer selling autoportraits on the Pont Saint-Louis in Paris w a friend. I worked at some pizza place on bd de Belleville. The boss never slept, ate one fried egg a day and gave us free pizza n drinks everyday. Clients ordered one expresso and remained seated for hrs jst talking abt whatever. Total Belleville cliche. Everything influences the way i process stuff. RN im an art student.

Im surrounded by it. I've been into it for as long as i can remember. My dad always brought the family to museums. When i was living in San Francisco, we went to Los Angeles one time mostly jst to go n visit the Getty museum. My college art history teacher was totally awesome. Art history entertains me.

I have phases in which i read alot and others in which i dont at all. Most of the time, i try not to remember the authors so it remains jst about the ideas. RN im reading Critical Play by Mary Flanagan.

Yes, but no at the same time. It really depends on the whole concept of a project. I kinda hate almst everything that is JUST about representation when it comes to new media related art tho, so i'd say im concerned about that.

This conversation took place between 22 March and 1 April on a Google Drive document.