The Week Ahead: Go to Japan Edition 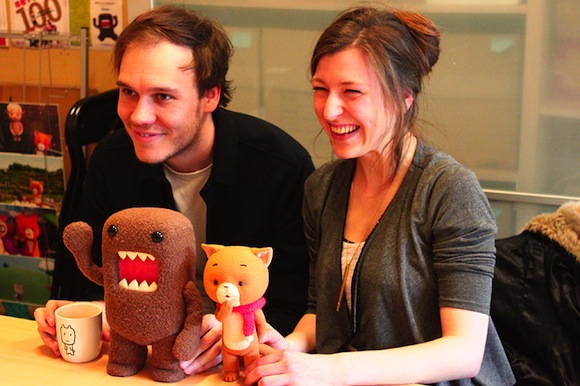 A notable opportunity came through the wire this week from Tokyo, where the Japan Image Council are offering a 70-day residency in early 2014 for young animators interested in engaging directly with Japanese animation culture (in other words, all young animators). Applicants must be between the ages of 20 and 35, and have had their work screened previously at an international film festival. More information can be found on JAPIC's website.

Now, without further ado, here are this week's opportunities, events and job openings, all culled from Rhizome Announce:

Through August 31, Public Assembly presents Penthouse 4C, a half-size replica of the most exclusive apartment in the Barbican Housing Estate in London. During the Hack the Barbican festival in August, the installation will host Public Assembly, a nomadic platform for collective works of art.

"New Pennants" by Matthew Williamson is on view at the Widget Art gallery (available by clicking here from your smartphone) through September 20.

#404 Not Foundopens Friday, August 30 at Co-Prosperity Sphere in Chicago, featuring work by artists including Patrick Lichty and Emilie Gervais.

Mills College Art Museum will host a closing reception for West of Center: Art and the Countercultural Experiment in America, 1965-1977 on August 28.

The exhibition Manifest: AR is on view at the Corcoran College of Art + Design through September 1, featuring (among other works) "Shades of Absence: Governing Bodies," an intervention by Tamiko Thiel that makes histories of censorship visible within the gallery space.

August 29: Tele Visions seeks submissions for screen based works to be presented in conjunction with the final shutdown of analog television in Australia in November / December 2013.

September 1: Deadline for proposals for new artworks and installations engaged with the internet for the 2013 Mobile Awards, run by Transcultures MediaArt Center in Brussels.

September 1: Deadline for artists (including those interested in digital printmaking) to apply for residencies at Lower East Side Printshop in NYC.

September 2: HERE performing arts venue in NYC is offering rehearsal and performance facilities for "sublet" at a partially subsidized rate for week-long runs in the fall season.

September 9: The Agency for Cultural Affairs (Government of Japan) is looking for three outstanding young animation artists from around the world with an opportunity to come to Tokyo and create new works while directly interacting with Japanese animation culture.

SUNY Purchase seeks Adjunct Faculty in Printmaking who can think "across disciplines" and whose interests and experience "encompass broader approaches to art practice and human knowledge." Deadline: 9/1.

The University at Buffalo, Department of Media Study, invites applications for an Assistant/Associate Professor position in Media Theory. Deadline: 10/12.

Film and Digital Media Department at the University of California, Santa Cruz (UCSC) invites applications for a faculty position in social documentary production at the Assistant Professor (tenure-track) level. Deadline: 10/14.