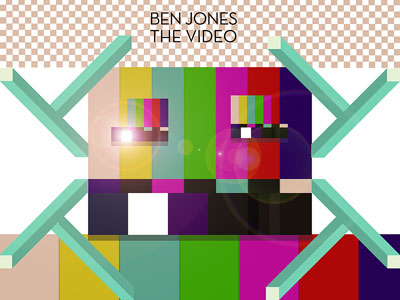 It seems pretty fitting that I’ve sat down to write about Ben Jones’ current exhibition at least three or four times.  The requisite online “research” always turned into episodes of Problem Solverz, Jones’ show on Cartoon Network, a trip down the wormhole of media-saturated content on Paper Rad, his collaborative with Jessica and Jacob Ciocci (including Rhizome and the New Museum’s recent archival of their website, http://www.paperrad.org and the accompanying exhibition, “Welcome to My Homey Page”), and a late night gchat where a friend excitedly offered to rip me his hard-to-find videos on DVD.

This is exactly the kind of intertextually meandering, visually anarchic, mentally overwhelming and massively entertaining experience that Jones is known for. Based on the gallery text and interviews that I read while trying to get a grip on his new material, Jones is trying—really—to simplify.

Ben Jones: The Video, at the Museum of Contemporary Art, Los Angeles, Pacific Design Center through February 24th, includes plenty that will look familiar to those who have tripped in the Jones universe before.  Quasi-religious Gumby dolls, burning neon suns, loveable part man-dog-anteater Alfe; they’re all here.  But the mood of the show is quite different from his prior work. It’s hypnotic, reflective, and more than a little bit sinister. 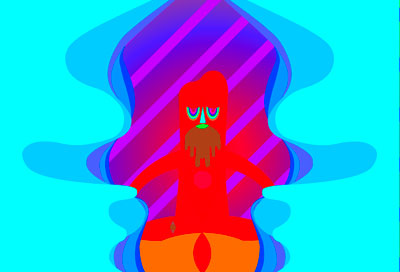 The exhibition has been described as a series of video installations and while, technically, that’s correct, it’s also more than that. Collectively, the works in the show function as an installation about making videos.  Unlike many of his fine art contemporaries, Jones is himself a manifestation of network age high-low plurality.  He runs a successful commercial animation practice, creating music videos for the likes of Beck and M.I.A., and he writes, voices, animates, directs and scores the Problem Solverz, a children’s show soon to begin it’s second season. The works on display at MOCA seem keenly aware of his double life and how these differing working methods affect his artistic production.

The first floor of the PDC galleries holds several large-scale “video paintings,” RGB videos projected over florescent-painted canvases in, alternately, flat geometric and discombobulating perspectival geometric patterns. The video paintings feature short pulsing loops of familiar pop culture, internet and technological tropes – including an eerily anthropomorphized TV color test screen – morphing into and submerging with their linear backdrops in a fitting introduction to what Jones calls “The New Dark Age,” the dystopian and mystical future of the present.  Running concurrently in a relatively small space, the works aren’t individually immersive but, rather, jockey for your attention, making evident the struggle to create and maintain narrative tension for a chronically distracted audience.

Jones – despite his RISD BFA and art world pedigree—maintains a strong populist, mass media bent to his conceptual approach.  The artist claimed, in a 2010 interview with the Modern Art Museum of Forth Worth, to have learned the most about minimalism from Atari.  On the one hand, this is self-consciously flippant but, on the other, it’s an insightful and increasingly prevalent view of the osmotic interfaces of visual and material culture.  Where did Tron come from if not a Lewitt grid or a Flavin neon?  And where did Paper Rad come from if not video games, children’s television and what has, in today’s parlance, transformed into Tumblr aesthetics? 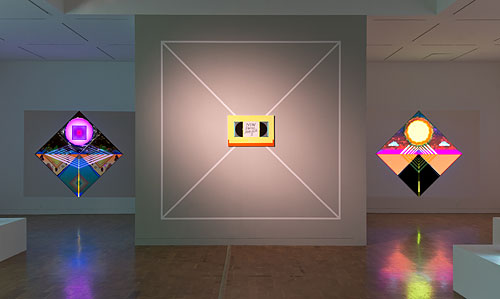 While this isn’t exactly a new observation, what’s interesting here is Jones’ sustained focus on just one media and its working processes, outputs and various subcultures. Video game designer and media theorist Ian Bogost has suggested a similarly focused approach for gaming, calling it media micro-ecology (in reference to McLuhan’s original term).[1]  Bogost proposes a focus on a singular form of media and its effect on society as a way to break down totalizing statements about technology.  Concerned primarily with video in the form of hand-drawn animation and digital vector rendering, Jones’ works here seem sympathetic to Bogost’s model: in their richness and variety they aren’t particularly concerned with the value or reputation of the medium itself but, rather, with documenting in hyperactive, sometimes overwhelming wonderment the many, various, and yet totally overlapping social applications of its use.

The second floor main gallery proves a particularly personal application of this concept, aside from a few forgettable road trip video paintings.  A clip from Problem Solverz offers a bizarre comedic interjection, while also driving home how an adult sature of children’s television made by an East Coast art collective ended up as a legitimately family friendly TV show.  Is this is a part of the medium’s life cycle or just an illustration of how close the two are, in reality?  The Alfe pilot, “This is Carzy,” from Paper Rad’s 2006 DVD Talking Trash, reads like a Simpsons/Beavis and Butthead hybrid, while the “mature” Problem Solverz was screened at Art Los Angeles Contemporary this weekend and the last clip I watched prominently featured nervous adolescent cyborg Roba sitting at an Eero Saarinen table on an Alvar Aalto stool.

Driving home Jones’ own involvement in both cultural spheres, caught somewhere between Ben-Jones-Commercial-Animator and Ben-Jones-Serious-Artist, is a video proposing a metanarrative for the entire exhibition.  A rendering of the gallery in which you stand contains a single male figure at its fictional nexus (is it where you stand, you wonder…where the projector is?) popping sloppily relabeled VHS tapes in to play on an outdated monitor, controlling the confounding parade of images we’ve just experienced.  Is he a congenial slacker just messing with us for lols, or some kind of media mastermind?  Just in case things were fitting a bit too neatly into the antihero artistic archetype, however, the compositional crux of the exhibition is, ultimately, its only non-video piece – a painting of a VHS tape labeled “New Final Master #3.”  Paintings about video, art about childhood, Day-Glo Gumbys about the dark age of media culture. This microecology reveals itself as vast, weird, and infinitely transmutable.

[1] Ian Bogost, How to Do Things With Videogames (Minneapolis: University of Minnesota Press, 2011).