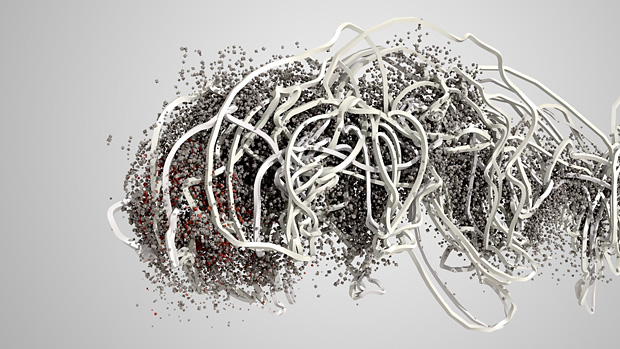 The Imagine Science Film Festival, now in its sixth year, has grown in the hands of organizer Alexis Gambis from a small discussion group among friends to a multi-venue mélange of screenings, discussion panels, and interactive installations taking place across New York City and New Jersey. This year's festival opening was held at Google's offices in Manhattan and debuted a line-up of short films organized around the evening's theme, "The Art of Code." The program selections were remarkably diverse, speaking in a variety of ways to both the focus of the evening and the festival's larger mission of encouraging dialog between scientists and filmmakers to bring increased awareness of the sciences to the public.

The rhythm of the program pulsed between generative visuals and more humanist takes on the code theme. The opening film, Forms (2012), by London-based artists Memo Akten and Quayola beautifully articulates both through a series of visual studies on human biomechanics. The animation's extruded lines mass together to suggest the human form in Duchampian progression through motion. Another animated film, Abbau (2013) by Masahiro Ohsuka from Japan, uses scientific formulas and diagrams as graphical elements. It is less an explication of the theorems on offer than a typographical celebration of their elegance in hand-drawn animation. Among the narrative films in the program, #PostModem (2012) stood out for its humorous mashup of visual references used to interpret futurist Ray Kurzweil's theory of technological singularity. Directors Jillian Mayer & Lucas Leyva call the film "a series of cinematic tweets" that uses science fiction imagery and pop-music videos to suggest Kurzweil's description of a time "when humans transcend biology."

If the opening night is any indication, festival-goers can expect a run of imaginative and provocative selections in this year's Imagine Science Film Festival, happening now through October 18.