From the Rhizome Archives: 9/11 and its Legacy

Today, as we look back at a few of the reflections of 9/11 and its complex legacy that can be found in our archives and elsewhere, our thoughts are with all those in Rhizome's community who have lost loved ones to political violence.

Wolfgang Staehle, a pioneer in the field of Net art, will have his first solo exhibition in New York in a decade at Postmasters Gallery, a venue that specializes in new media art... Stay tuned to see what Staehle will present to the offline public at Postmasters.

New York City is in a state of shock today, after Tuesday's disastrous attacks on the World Trade Center. Concerned emails poured in, asking about the status of Rhizome and our community. The Rhizome office, located in the SoHo neighborhood of Lower Manhattan, was not physically affected by the attack. All Rhizome staffers have been accounted for and are safe... The Rhizome web server went down on Tuesday morning, blocking Rhizome Raw and staff email for approximately four hours... The World Views artist residencies, a program of the Lower Manhattan Cultural Council, were housed inside the World Trade Center, and have been lost. It has not yet been reported if any World Views artists or administrators have been injured in the attack.

[Addendum--Later reports unfortunately confirmed that Michael Richards, an artist in the World Trade Center, was killed in the attack. He will be greatly missed.]

Like Staehle's previous work "Empire 24/7"--a webcam version of Andy Warhol's realtime documentation film "Empire"--this new exhibition features three webcams, each trained on a different urban landscape. One of those landscapes is Lower Manhattan. In grim coincidence Staehle's webcam captured the terrorist attack of September 11, streaming it onto the gallery wall just as CNN streamed images of the attack onto televisions around the world. Staehle's show is not viewable via the Web, however New Yorkers may visit the gallery exhibition, which closes on October 6.

Sept 24, 2001. Rhizome launches a 9/11 resource page, "911--The September 11 Project," including links to artworks that reflect on the tragedy, community support resources, and documentation by artists such as T. Whid.

I went to the gallery that day, and two of my friends came by, and one said, "Oh, Wolfgang, this is a really important piece now." I said, "What do you mean—it wasn’t before?" The other friend said, "No, it’s ruined now, its whole meaning is changed." I said, "You’re both nuts." I just set up a camera, and of course things can happen.

I was sitting here watching the 9/11 service and when they rung the bell at 9:03, I had to turn it off...the problem is that it will undoubtedly be used by the Bush Administration and American Media Culture once again as a justification for its own irresponsibility, and for that, I feel that perhaps some other form of commemoration would be in order. One that would maintain the gravitas of the event without the maudlin faux patriotism that actually reduces it to an ad for little silver coins with pop-up WTC effigies.

I guess I'd like to make my simple and possibly naive plea--Less bombs and guns, more education, outreach, health care, food and housing here and abroad. Either way, some people will lose their lives at this point, but would it be better to have it happen while giving someone a meal, or by detaining someone at a checkpoint? I'll support 115,000 Peace Corps in Iraq... 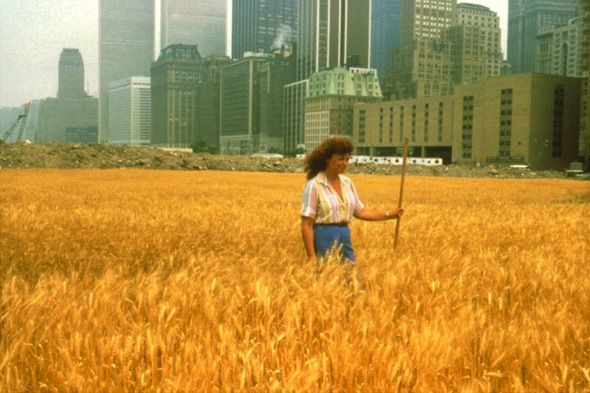 ...Architecture isn’t a symbol (that was the hideous confusion the attackers made), it is an expression; a concrete expression of an idea, an ethic, a desire. Modernists plazas are often characterized as "fascist" — the idea being that they are symbolic projections of power. Architects seldom, if ever, discuss lawns, park benches, or flower arrangements as expressions of power. Looked at as concrete ethical expressions, rather than symbols, we can begin to see these things for what they are: impediments, barriers, place holders, and dividers.

The bomb-proof base, the part of One World Trade Center that I find most offensive, is so offensive not only because it was entirely the product of the worst fear mongering impulses of the Bush years, but because it is also the worst reflection of our contemporary moment. During his talk at Cooper Union, [Freedom Tower architect David] Childs explained that because the WTC had twice been a target of terrorist attacks, security experts had insisted that the design for the building incorporate withstanding a hypothetical 18-wheeler tractor-trailer packed full of C4 explosives being driven up to the base of the tower and detonated.

I don’t dismiss the need to protect the site, I am however, totally disgusted by the politics that made it possible to drive a semi alongside the tower’s base. As Childs explained, the residents of Battery Park City fought the efforts to bury the West Side Highway alongside the WTC site. Had the highway been buried as part of the rebuilding effort, any truck-laden bomb blast would have been easily contained underground and no bomb-proofing would have been required. The problem is that that would have united Battery Park City with the rest of Manhattan, and that is not what the developers of Battery Park want.