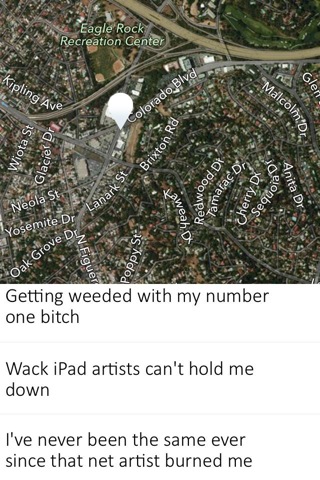 An analogy: there are two types of kitchen tools, the kind that do one thing (usually poorly?), and the humble kind, the kind that slowly reveal their true usefulness. First category: Microwave Bacon Cooking Trays, Avocado Slicers, Those Syringes That Inject Marinade. Second category: Microplane, Potato Peeler, Tiny Spoon.

Right, so a couple months ago Jon Nash and Michael Petruzzo (full disclosure: I drink with these people like, a lot) released a wonderful and seemingly useless app called Slight. The mechanics are as follows: upon opening, the user is shown a pin of their location on a map. Click the pin, and one can leave a short message that is always pinned to that location and never deleted, along with any other messages that have previously been left there. When someone leaves a message, everyone else who is there gets it pushed to their phone. You can upvote and downvote previous messages from that location. User, you may also fly around, at your will, viewing messages left Anywhere On Earth. If a place has had lots of messages within 24 hours, the pin turns red. Also, Slight is completely anonymous. There is no sign up, no login, no user names. Imagine.

Uses are myriad, such as talking crazy amounts of shit on your peers while at a party or opening, but there are several other, less caustic uses that I've discovered. You can use it to sell drugs or find someone to do drugs with! Sample message: "I'm in the bathroom, bring me drugs." You can use it to find a potential makeout partner using the same message but replacing "drugs" with "your face." You can leave reviews of restaurants, you can find friends at a concert, you could probably even use it as some sort of dead drop, hiding messages in the desert for your spy friends. This is what I was talking about in paragraph #1 about open-ended apps, I think you understand my central thesis.

Why, one may ask, are all the art kids and all the net kids in LA going crazy over this thing, deeply embarrassing themselves and others? The art world, you see, like any other scene, is a pressure cooker. Feelings such as rage and horniness build up, with very few scene-sanctioned outlets. But now! We are free to vent, to let it rip, to say what everyone was thinking. Another reason: artists are poor, and a simple message such as "Try the Grateful Bowl, it's cheap and filling!" can go a long way in helping one's budgetary issues. Finally, people in scenes, like all other pack animals, need a way to pick themselves out in a crowd. I have seen the actual message "net artists are in the bedroom."

If this all sounds like a long-winded advertisement, that's because it is. I love this app bb. 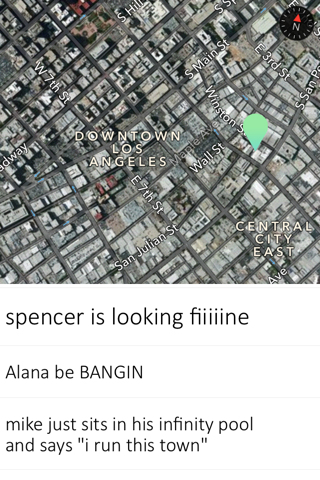 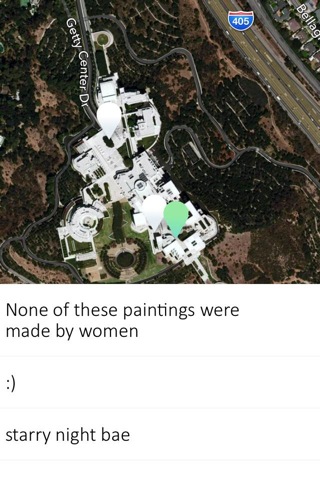 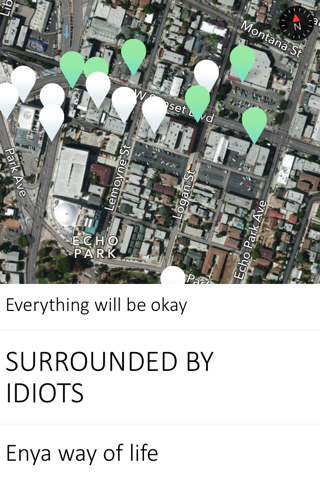