The Dark Optimism of Otto Piene and Zero

Yes, I dream of a better world.

Should I dream of a worse?

Yes, I desire a wider world.

Should I desire a narrower?

A dark gallery space is illuminated by a single ochre neon bulb, which initiates a choreographed lighting sequence comprising 449 additional bulbs, each attached with metallic arms to a central chrome orb. Neon Medusa (1969) by Otto Piene (1928-2014) evokes Sputnik and networks of cables, Cold War technological development and military communication and control, while also calling to mind constellations, Vegas casinos, and illuminated communities dotting a shiny globe. Its seeming exuberance seems incongruous with the anxieties of the nuclear age, and with the title—Medusa being the famously hideous woman of myth, who turned onlookers to stone if they stared into her face. Where the Medusa of Greek myth is the terrifying, deadly Other, Piene's piece is a different kind of Other, a technological Other, that invites our steady gaze.

A founding member of seminal postwar art collaborative/movement Zero, Piene passed away in July, leaving behind a body of work that—like Neon Medusa—invites viewers to engage directly with technology and its transformative potential. The Medusa is currently on view in "The Art of Zero: Heinz Mack, Otto Piene, Günther Uecker & Friends" at the Neuberger Museum in Purchase, New York (July 13 – Sept. 28, 2014); with "Otto Piene, More Sky" now on view at the Neue Nationalgalerie in Berlin (July 19 – August 31, 2014) and ZERO: Countdown to Tomorrow, 1950s-60s (October 10, 2014–January 7, 2015) soon to be showing at Guggenheim New York, it seems a reassessment of Zero art for the twenty-first century is underway. We are primed for this work, given today's whiplash of rapid technological advances against a backdrop of political violence and the uncertainty of climate change—for us, as for the artists of the immediate postwar era, it is "both the seeming end of the world and its beginning."

For Piene, the seeming end of the world came early, in the form of war and Allied bombers raining incendiary explosives on targets both military and civilian. Drafted as one of Hitler's Kindersoldat, Piene spent the years after the war in a British internment camp, where he took up art, eventually taking up a formal education in Munich.

In 1950, Piene moved to Düsseldorf to attend the Academy of Fine Art. The city was, as he later recalled, "a gray emptiness...a cultural cemetery and a knowledge vacuum." Amid the city's ruins and against the backdrop of its conservative vision of the future, Piene and his fellow artist Heinz Mack—lacking access to any real cultural infrastructure—began holding one-night exhibitions in their studios. Piene, Mack and Yves Klein published the magazine Zero 1 in April 1958 and by October of that year, a group of seven or eight affiliated artists exhibited and published Zero 2.

The group's key premises included the rejection of expressionism and subjectivity and an enthusiasm for the renewal of art via the new materials offered by technology. As Piene wrote, "From the beginning we looked upon the term [Zero] not as an expression of nihilism or as a dada-like gag, but as a word indicating a zone of silence and of pure possibilities for a new beginning as the count-down when rockets take off. Zero is the incommensurable zone in which the old state turns into the new."[1] The imagery of the rocket here is key; technology may have been associated with the ravages of war, but it also offered the only possibility for renewal.

Piene's nod to a destructive technology is telling. The potential for renewal is not an inherent characteristic of technology; rather, it can be found only in a coming together of elements that are often treated as disparate: technology, humans, and natural elements. "Zero" is the unlimited expansive potential of these elements drawn so tightly together that they amount to nothing except that potential.

This aesthetic of interdependent systems, which sought to bring together nature, human, and machine, can be seen in works by the Zero group that create an interplay between the artwork and its environment, between natural and man-made materials.

Works currently on view at the Neuberger include Uecker's 1963 Nail Structure, a grid of painted white nails on canvas, and his Column of Nails (1964), nails roughly hammered into a rectangular pillar, painted white, and perched on eroding, untouched, timber, take alien, plant-like forms, while retaining the familiarity of a man made technology—the nail. The rectangular stainless steel sheets in Mack's Untitled (1964) reflect, and therefore manipulate, the light that strikes them.

Light was a particularly important part of Zero's embrace of both technological and natural elements. Light was potent: an explosion illuminating a cityscape or a glint off of shrapnel. For Piene, the embrace of light emerged from a series of "raster" paintings, for which he used grid-like stencils to transfer materials including oil paint and soot onto canvas and paper. He came to the idea of working with light as a medium after shining a light through one of these stencils, in a move that seemed to anticipate the pixellated light fields of digital images. 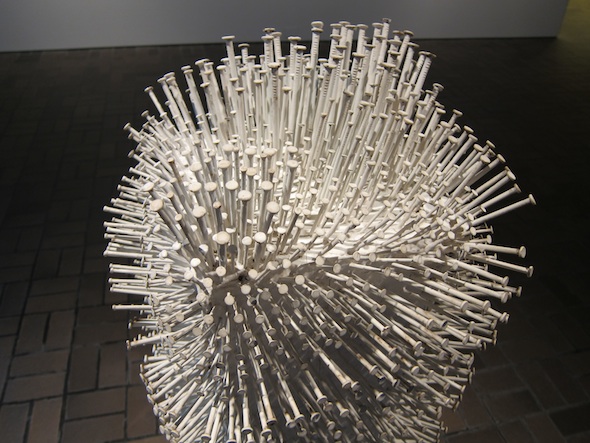 The systems aesthetic is further explored in works where artist, viewer, materials, and environment were all implicated. Zero friend Hans Haacke's Slow Bubble (1964-68) consisted of a single bubble floating within a Plexiglas tube filled with clear viscous liquid. There is an interplay between organic and inorganic, between the artist's authorship and nature's intervention: Haacke has captured air within a viscous liquid, but the air and liquid move according to fluid dynamics, gravitational forces, perhaps the footsteps of the viewer. In Haacke's terms, this is "a 'system' of interdependent processes."[2]

Such a system is on display, too, in Zero collaborator Harmut Bohm's Homogenes Feld 8 (1965) and Homogenes Feld II (1965), where small, rectangular, magnetized plastic pieces chitter inside a Plexiglas grid. The plastic pieces jump about at random in their individual boxes, though each are connected through one electric current. As with the choreographed illumination in Piene's Medusa, the work seems a kinesthetic model of interconnected processes, a visual metaphor for Zero's ethos of community and interdependence.

Thus the disbanding of the group in 1967 did not end Piene's use of technology to foster a communal spirit through art. 280 people collaborated to create Piene’s Olympic Rainbow, a work of "sky art" created for the 1972 Summer Olympics in Munich. Colored fabric sheets were stitched together and inflated to fly as a malleable, wafting rainbow above the entire Olympic stadium. The work was seen by "a live audience of 200,000" during the closing ceremonies of the games, and by a "worldwide television audience, reached by communication satellites, that numbered between 350 and 500 million. The scale of this event...was possible only with the help of modern technology and engineering." Spectacle and television, which were pressed into propagandistic service for the 1936 Olympics, here were intended to bring about "a complex interplay involving people, objets d'art, high technology, human environment, and nature."

In 1992, Otto Piene asserted: "[Art-and-technology] is alive and well and enjoying more vitality, variety, and expansion than ever before. It is currently the only expanding field in the arts; it feeds vitally into technology and industry...'art applications' have abounded since the advent of photography." As technologies have developed, so too have the outlets in which artists create. Piene's championing of the artist's usefulness to the technologist and vice versa, and for the artist as technologist, may seem to suggest a naïve optimism about technological progress. However optimistic, the implication that each new development is always a step forward is rooted in the potentiality of a countdown to zero.

Thus a notion of progress lies in Medusa's flashing through various stages of illumination: each advancement, each illumination, originates with darkness. Zero art suggested that finding a radical potential for the future must begin with a willingness to look squarely at the medusa, with an understanding of the interconnectedness of technology, nature, and ourselves, as part of a dynamic system. In our contemporary context—our networked lives, our urge to collaborate, our grappling with insurmountable geopolitical problems—Zero's wilfull belief that this potential existed is well worth revisiting.

[1] Quoted in Günter Bergaus, "Happenings in Europe: Trends, Events, and Leading Figures," Happenings and Other Acts, 270.