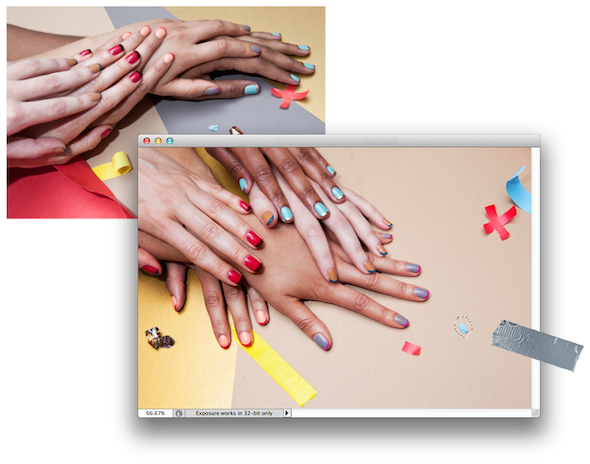 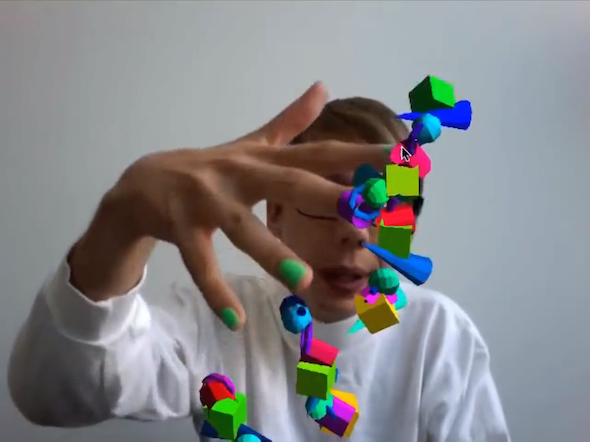 Jeremy Bailey, Colors of the Spectrum, 2010. Still frame from video.

Nails' position between "organic human and inorganic tool" suggests a possible way of thinking about the surge of interest in nail culture in recent years. Nail art is one of the fastest growing cosmetic industries, seeing an over forty percent increase in sales beginning in 2008.[1] In 2013, nail polish sales were set to exceed lipstick sales in the UK for the first time in history.[2] Nails are everywhere: Instagram and Tumblr accounts devoted entirely to testing out colors and DIY designs, mani-cams at celebrity award shows, and not to mention all of the innovation within the nail industry, such as gel manicures and decals that last for weeks.[3]

Nail art is particularly well-suited for online sharing because, compared to other cosmetic products, it comes the closest to embodying anonymity and universality. Hair products are made for specific hair types and makeup matches specific skin tones. Ethnicity, sex, and age are not as visible in nail culture: a nail is a nail and this allows images of the nail to circulate online in a particularly fluid manner. The nail is ready-made for social media.

This is not to say that there aren't more socially accepted styles in different circles, nor meant to diminish distinct cultures and communities that have emerged. But nails are content-driven. They are nearly standard units, blank canvases upon which one may use colors, styles, and patterns in expressive fashion. Nails' relative anonymity means that you can make your nails as outlandish and over-the-top as you want without the fear of becoming data points in a facial recognition database.

Anonymous and object-like, and yet at the center of beauty culture, nails' ambivalent status, central to our look but peripheral to our appearance, contribute to a sense of fluid social identity that other cosmetics and accessories could never offer. In Jennifer Chan's Important Objects (2013), a film made for a selfie-themed exhibition co-organized and curated by the Museum of the Internet and ArtStack, Chan uses her nails to create a portrait of herself. The piece begins with an out of focus close-up of Chan's face, from about the nose down, telling us, "So, I was gonna make this video of my face in love, or in the throes of orgasm, but I'm now really out of love, so I thought I was just going to make something really beautiful." Repositioning herself further away from the camera lens, Chan stands at a distance with only her torso visible, placing her hands, one crossed over the other, in front of her body.

Throughout the video, Chan talks about how she loves everything too much. While she holds butter, bananas, an array of plastic, inflatable balls, and other textural objects, her nails change from a virulent green to periwinkle painted acrylic then to hollow, masked shells of negative space, revealing moving patterns in lieu of paint.[4] Rather than reading the emotions that we might imagine are on her face, like the expressions Chan mentioned, we instead know Chan through objects: those she selects, and her nails. If images of the face and body generally limit us, inscribing us in social hierarchies and taxonomies, our nails are much more open to transformation. This fluidity, in Chan's case, gives the video an emotionally charged intimacy that only evaporates at the end, when Chan's face appears on camera, saying "I don't care what you think of me." While her face is defiantly challenging, Chan uses her nails to show us a more personal and multifaceted portrait of herself.

Jeremy Bailey also explores a kind of self-portraiture through nail art with his Nail Art Museum (2014), but in a way that more specifically addresses the art system's political economy. While Bailey previously used his face and its visibility to "get famous" on the internet, he does not reveal his name or face to the viewers in this work. Instead, Bailey offers his hands, specifically, his nails,[5] adorned with nail plinths generated with augmented reality software written by Bailey. Bailey asserts that the artist's hand, foregrounded in this work, is "more powerful" than art institutions like the Whitney, the New Museum, or Tate.

More importantly, though, he also asserts "[t]he plinth is the most powerful object in a museum. It allows you to host any artwork." The plinth does the heavy lifting so the artwork can sit pretty while often going unnoticed. By claiming that this is the most powerful object in the museum, Bailey reassigns power to such supporting roles. On a physical level, nails play a similar supporting role; they can host any design: painted, adhered, sculpted, or even 3D printed.[6] Nail art is also the province of those who are relegated to supporting roles societally, as a feminine trope and a product of service economy labor, often, by the salon worker. Celebrating the power of the nail-as-plinth, Bailey aligns himself with those who play such supporting roles.

Former Estée Lauder CEO Leonard Lauder coined the term "Lipstick Index" during the 2001 recession when lipstick sales in America increased by 11%. Similarly, during the Great Depression, cosmetic sales increased by 25%.[7] Lauder and believers of the "Lipstick Index" would suggest that cosmetic sales increase during an economic downturn because lipstick is an affordable luxury, or what would be considered an "inferior good" in economics.

The same could be said of nail polish.[8] Nail polish sales have followed the trend of the Global Recession; beginning with the 2007-2008 financial crisis, nail polish sales steadily grew through the following years. However, the transition from a lip-centered cosmetic world to nail-centric one correlates with another economic transition: a service economy to an information economy. If lipstick is designed to smooth over the complexity of a face-to-face encounter between client and service provider, nail polish is an accoutrement for the hand that is documented and circulated on thousands of dedicated Tumblrs and Instagrams, simultaneously individualized, distinct, and deeply personal, yet dually disembodied and anonymous. These hands represent a certain kind of privilege, and they may even be prepared with the help of a salon worker, but they also are the hands of a new laboring class, and it is with them that Bailey throws in his lot. 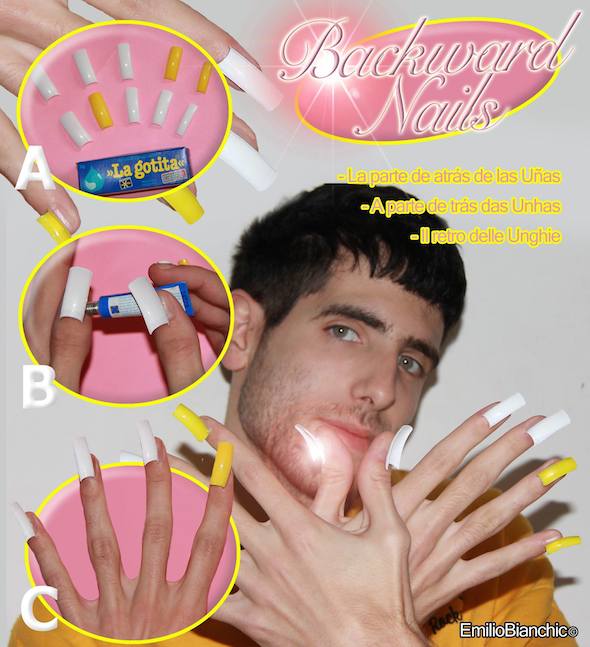 Participating in online forums, such as an exclusive nail art Facebook group for nail industry professionals in Latin America (which took months to gain access to), Bianchic posts photos of his designs as worn by him. One image of his feet with an animal print pattern garnered around 200 comments, most of them fixating on the hair on his toes, trying to discern if the digits belonged to a man or a woman. In the context of this group, Bianchic's gender identity becomes the primary topic addressed in comment threads, though his "ugly" designs still generate dismissive remarks. His nails—lauded by some members—are generally scrutinized for not conforming to preconceptions of who is allowed to participate in this community and what their nails should look like. 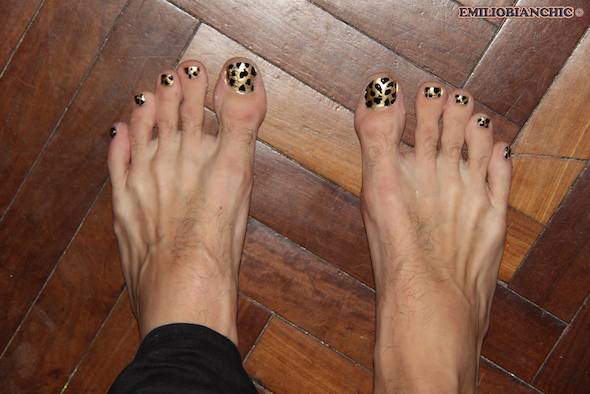 In his Gender Conscious Free Nail Art Tutorial,[10] Bianchic asserts that "everyone has nails and everyone could be an artist." This statement, recalling Joseph Beuys, is not unlike the willfully naïve, "slightly ignorant and on character" idea promulgated by Bailey, that everyone is a famous new media artist by having access to digital technologies, despite many people not having access to these technologies.[11] In Bianchic's work, this is furthered by his embrace of the accessibility and affordability of nail polish. By inserting this routine into his daily life and artistic practice, Bianchic infuses the everyday with the possibility of fluid identities and bodily transformation and the political power of aesthetics, while also embracing what traditionally might be considered "outsider art." He then further queers this through his atypical nail-decorating practices, such as adhering acrylic nails backwards; gluing decoden objects, like crystals, on his toenails; and sticking small acrylic nails on top of his already painted nails.[12]

Interspersed throughout Bianchic's instructive comments in his DIY-inspired tutorial, phrases like "Destroy patriarchy" and "If anything doesn't look good you can always say it was consciously done" underscore the confrontational nature of this nail art practice. Bianchic's nails are an act of defiance, used to express the fluidity of these roles.

Because of the hand's dual status as body part and technological object, there is something that seems more than a little cyborgian about nail art. Relatively standardized and relatively anonymous, our nails seem tailor-made for social media sharing, which is one likely reason for the recent shift from a lipstick-dominated cosmetic culture to a nail art-centered one. Although understanding oneself as a cyborg has long been held up as a way of moving beyond restrictive social roles, nail art is cyborgian without being inherently liberatory. As the aforementioned anti-date rape product shows, blurring the human-technology boundary via nail polish may only reinforce gender roles. Even so, there is still something particularly powerful about such a small portion of the body having such disruptive potential, when artists like Chan, Bailey, and Bianchic draw on the possibilities presented by nail art and its circulation. Disembodied digits, both object and stand-in for an entire body, are fluid and mutable, like the identities, subject positions, and (shifting) forms of digital labor these artists inhabit and perform with the aid of prostheses and polish.

[3] Some more bizarre instances of nail-obsessed culture include lemmings, My Strange Addiction: Drinks Nail Polish, long nailed celebrity LaRue's series of YouTube videos devoted to explaining how she performs daily activities, like typing and texting, with her long nails, and ASMR-like videos with women typing on keyboards wearing acrylic nails.

[4] Chan's ever-changing nails are reminiscent of the scene from Total Recall (1995), in which a secretary is giving herself a sci-fi version of a manicure, using an object similar to a stylus to instantaneously change her nails from blue to red with one tap. https://www.youtube.com/watch?v=aEyWavv1Lts

[5] This is not the first instance Bailey has made work about nails: ColorsoftheSpectrum.mov (2010).

[9] Bianchic began painting his nails in 2012, often only using one color. About a year later, he began experimenting with more untraditional applications and fashions, which he then incorporated into his larger practice.

[12] Nails are especially loaded cosmetic accessories in the LGBT community, with drag performer Alaska Thunderfuck 5000 proclaiming, "If you're not wearing nails, you're not doing drag." https://www.youtube.com/watch?v=VsBdLc39X5w