Your work explores the ambiguities of the cyborg's promise—how it can reinforce patriarchal gender systems as well as liberating us from them. Can you talk about that specifically in relation to Eden, where "lust" appears as an apparatus, a series of luxury hi-tech prosthetics, rather than as a possible relation between bodies?

I wouldn't oppose the apparatus to a possible relation between bodies. I would say that it mediates, complicates, and likely crystallizes relations in a particular way. Pornography in general is just the technological mediation of normative desire, whether it's through dildonics or other viewing apparatuses. All these means are very much capable of re-inscribing everything in very traditional ways. But they are not irredeemable. It's not like the multiplication of desire through technological means is always conformist. It may subvert itself along the way.

A lot of the proliferation of desire just happens through subtle de-territorializing forces. Alien-signal super-stimuli replace normative desire. Things can happen through chance encounters with things that are outside what you are supposed to desire. The validation of sexuality through capitalism and markets of course can end up reifying gender—but market niches need to expand, and trends change. The spread of queer politics and all forms of identity politics attests to these kind of forces. If anything, I think that identity politics are still too tied to certain narratives, even though they're fissuring and multiplying. Even within for example the trans community there are so many different types of trans, even within LGBT in general there are so many variations and so many people that deviate from the mainstream conception of that. Hence you have the development of new identities like otherkin, theriantrope, transabled, multiple system, furry, asexual, etc. These communities draw from LGBT identity politics, and often their membership (by self-labeling) overlaps.

There are things that come into people's lives and disrupt their pre-existing patriarchal desires. Vague generalized sexual/gender/identity alterities (and/or disorders) are a side effect of infospheric eroticism. 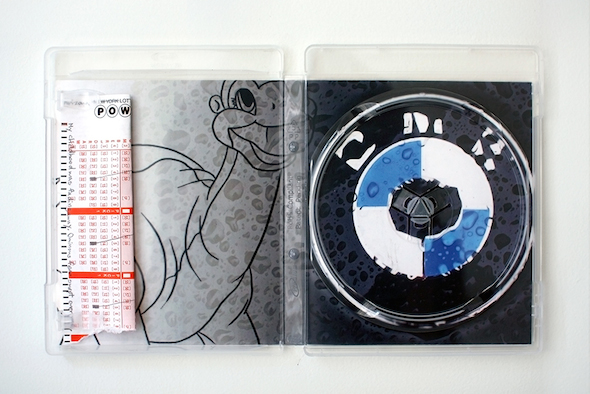 In your work Complex Cases, you invoke spectacular masculine violence, displaying quotes from the Columbine killers, Adam Lanza, Elliot Rodger et al on modified video game cases—but the cases are empty. It's as if, going beyond the liberal critique of video games, the hyperviolence of the game is actually hard to distinguish from the ubiquitous hyperviolence of race, gender, work, money. Could you say more about this work, and the use of the school shooter manifestos?

In the cases, I investigate various threads that appear and often reappear in the trajectories that lead to spectacular male violence. The quotes on the cases vary: some of them come from forum posts because that's all they left behind. Adam Lanza only left behind traces of data on the internet, there are no real letters or manifestos. 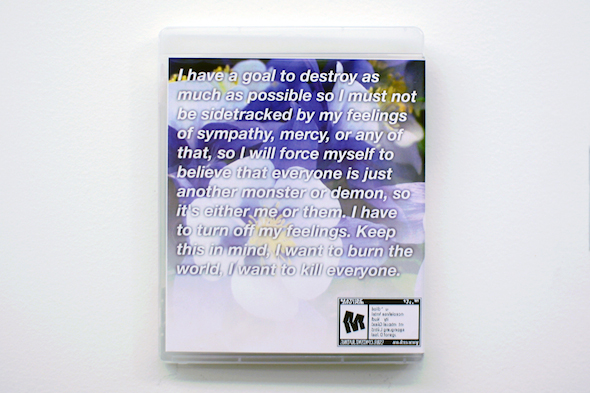 Complex Cases is a pun, because all we have are these trajectories that seem to point towards certain narratives in common between the school shooters, common sentiments, and even exposure to certain cultural trends and means that lead up to their violence. I don't think there's any way we could ever really describe with nuance what happened, but I'm really just trying to expose different threads that appear and reappear. A lot of these seem to be narratives that reinforce themselves, especially as the school shooter phenomena becomes naturalized, to the point where you see them imitating each other. For example, Adam Lanza would make charts; he had a spreadsheet of all the school shooters with ranks by deaths, and injuries, as well as what kind of weapons they used.

I'm really interested in hyperstitious narratives that reinforce themselves in reality through belief. A hyperstitious narrative is one in which the narrative immanentizes itself, for example how sci fi provides the inspiration for people in STEMs to produce products. It's this feedback relation. That's also how psychoses build, it's just reaffirmation, coincidence, intensification, to the point where a lot of these school shooters believe that they're on a special path and that there is a theology behind the doom that they are going to bring upon people. There's this positionality of the subject as the victim of some kind of cosmic tragedy that needs to be avenged through retaliation. It's clichéd revolutionary, in the Fight Club conception of just "fuck shit up," so not actually revolutionary but very heavily politicized. 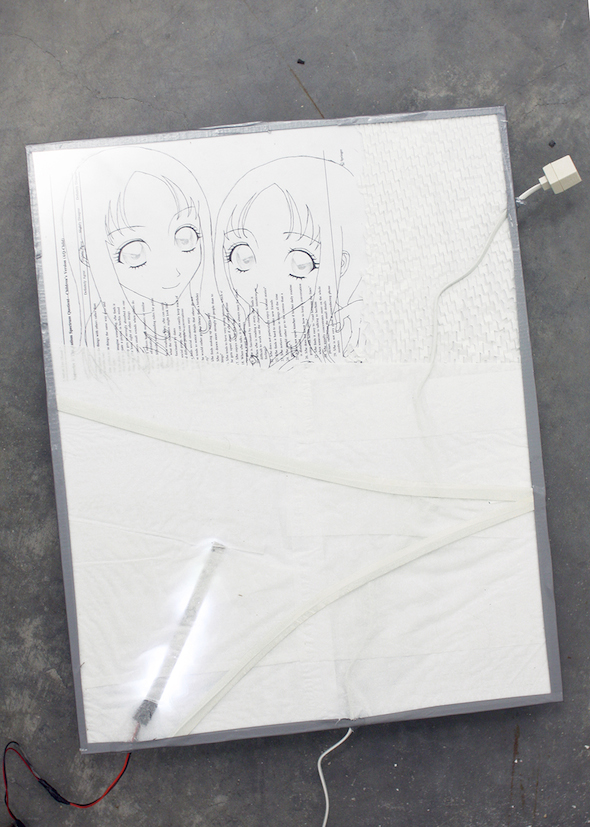 All of the above are prescriptive as much as they are descriptive. They situate one within discourse. Mental pathology and gender define boundaries for behavior. Sometimes it's comforting, like knowing one's place within a particular cosmology. Though these prescriptions might present themselves as a way of knowing oneself better, they often end up regulating behavior, or actualizing themselves through bodies that come in contact with them. They congeal, yet they are unable to totalize everything into themselves.

The avatar can exist more fluidly than the gendered body and allows escape from some, not all, of the body's ontological entrapments. The avatar functions similarly for those who may actually be suffering from mental illness. For example, someone who struggles with face-to-face communication might find remedy in expressing themselves through avatars in online worlds. It is for this reason that many—those on the autism spectrum for example—find vehicles for expressivity through fictional characters.

Your work looks at technology in a way that seems aesthetically aligned with what used to be called post-internet art, but is different in that it seems guided by emotional or political concerns rather than form alone.

I think the assumption that post-internet experiences, so to speak, must be perceived through a detached lens is kind of an error because these experiences really do influence people and are formative. They involve intense emotions and not just images on screens. There's very much a material base, we can't forget our bodies and their materiality and responses to codes on the internet: codes of all kinds, image codes, representational, sexual, pornographic, biopolitical. I think of net art and their various experiments with hyperlinking and hypertext. That's what leads to conspiratorial or very horizontal associative thought process, where narrativizations can come together through various sources and reinforce each other. These stories become captivating enough to the point that people's lives are structured and mandated by them, whether the stories are diagnostic categories, or political theologies, or stuff like that.

I feel in a sense like I liberate them from this context of just being imaginary entities that are to be masturbated to or to be fetishized in one way or another. As much as these representations are used for those means, you also see people identifying with them or using them as avatars, whether that has an erotic component or not. These beings do take on lives of their own. Inori Aizawa, the Internet Explorer girl, embodies the browser and is from a Microsoft viral campaign, but people produce fan art about her. I think it's fascinating that these fictional bodies have so much potential for identification and eroticization, or even total animism, where people really ascribe living qualities to those things and end up becoming or mimicking them. The images became the substrate for my dissociative tendencies; I produced other selves.

That's where my interest in otaku culture really comes from, or in nerd culture in general: The relationships between/within bodies, of embodiment, where all these interchangeable ever-changing images dictate the body. They're recombinant. Mostly they're imbricated in these profit-making contexts, but I'm really interested in how people will take these characters and make them their own. Sometimes these narratives really start to penetrate their personal lives and their appearances, and these characters take on lives on their own, through affinity or whatever.

Images of bodies become recombinant, as do bodies themselves, and everything is becoming fragmented and up for grabs. I'm kind of nihilistic so I can't say it's totally liberatory. I feel like it's also network forces and economic forces undoing things and restructuring things, maybe these are more emergent processes that may interact with other political struggles but there may be darker forces at play as well. 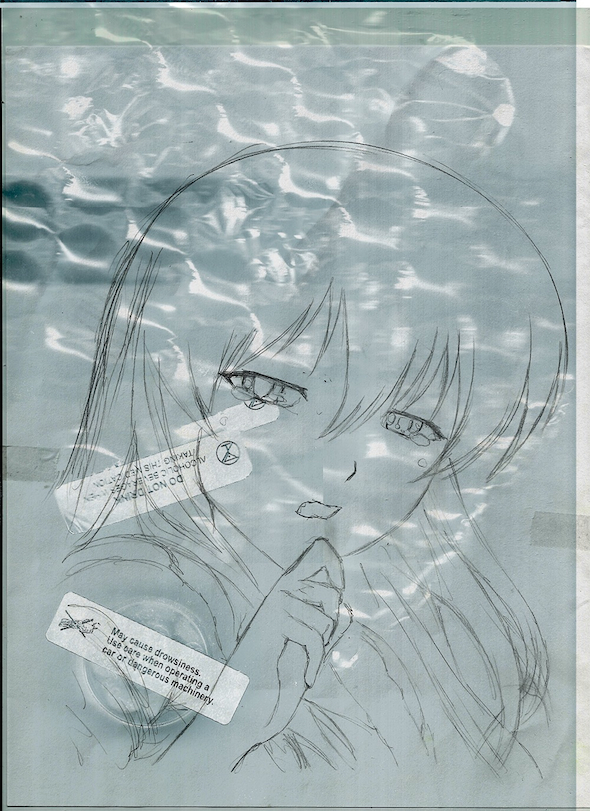 How/when did you begin working creatively with technology?
I began making drawings in MS Paint around the age of 4.

Where did you go to school? What did you study?
I'm currently working towards my BFA in "Digital Art" at Pratt Institute.

What do you do for a living or what occupations have you held previously?
I am primarily a student, and currently hold a job on campus. I also do tech support on weekends for a software/media business.