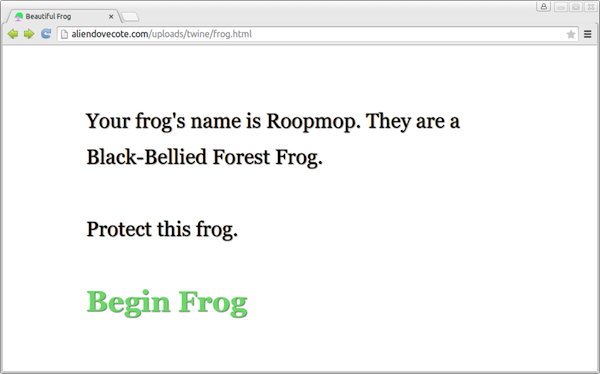 Described by its creator as a "frog simulator," Beautiful Frog by Porpentine is actually a text-only interactive fiction build on the Twine platform that allows players to guide a frog through its froggy life. Each turn marks the passage of a year in its life; black serifed text describes its various froggy experiences and milestones, while green text allows the player to make basic decisions like "hop," "sing," or "eat." Time passes quickly—too quickly!—but happily the "frog death" setting is set to "false" by default. Those that prefer to deal with the facts of a frog's life directly can change this setting.

"Protect this frog," the game admonishes you when you meet your new frog for the first time. Mine was named Guggo, and it was a Yellow-Striped Savanna. It dedicated its life to singing, refusing "Hop" and even "Eat" at every turn.

On Monday, game critic Jenn Frank wrote in an interview with Nora N. Khan that videogames have a lot in common with theater, particularly the ability to create compelling narrative worlds through an economy of means.

What makes a piece of stagecraft ring authentic? How do you establish a believable sense of place? We know that, in video games, this isn't necessarily accomplished with polygons or particle effects. You don't actually need a lot of resources. With stage, you can do a lot in a black-box theater, this literal blank slate, and the question becomes more, well, how do we use this space, can we use it in an interesting way? Can we surprise the viewer?

Calling Beautiful Frog a "simulator" draws attention to its utter simplicity, and invites comparison with the goofily violent Goat Simulator. But even without the latter game's fast-paced action and high-end graphics, Beautiful Frog is somehow just as "ring authentic," and its main character somehow more three-dimensional and alive.