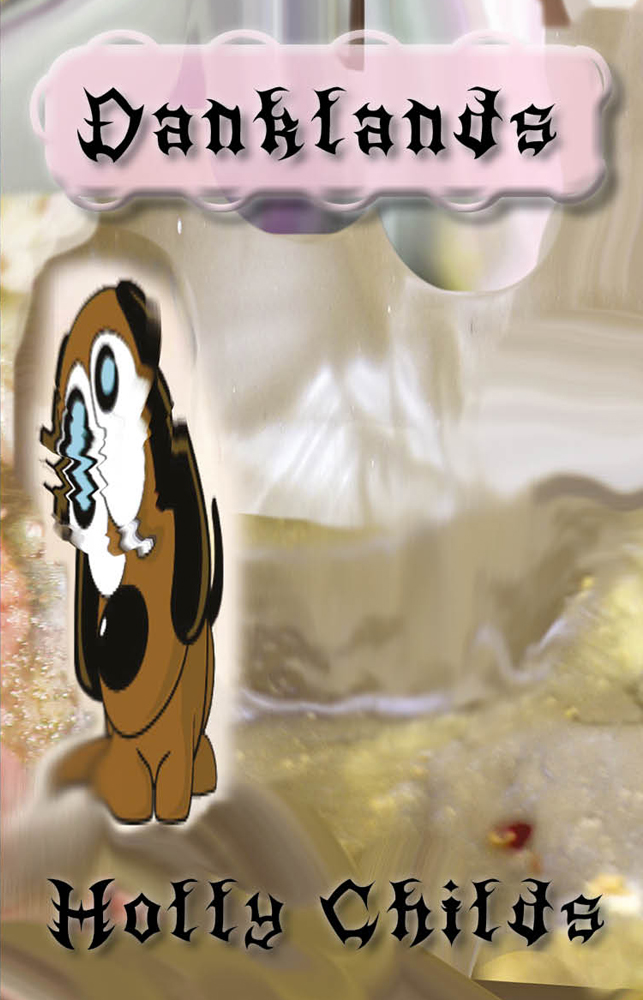 Danklands, the second novella by Holly Childs, coming out as an e-publication this February (first published November 2014 by London gallery/publisher Arcadia Missa), prose-poetry in 15 chapters over 100 pages. Australian edition of 100 in bb pink; European edition in bb blue.

This is Augusten and today I'm going to show you how to achieve a very cute make-up look for seafaring or lounging by the ocean or even just for when you're dredging a swamp or lake….I am going for a deeply oceanic look today so I'm starting with a BB creme mixed into your regular foundation. If you're going to be using this look in an area of planet Earth that has a lot of ozone layer depletion, like for instance you might be in Antarctica….like maybe you're a scientist who's just started dating again after a massive break-up, or doing some whaling, or actually just on a regular cruise...make sure you are using a BB cream that has a high SPF rating…(5)

Rising damp is when a wall gets acne, interestingly, it may also lead to the bodies of occupants developing acne too....(22)

Danklands in the age of disaster capitalism: the apocalypse is in the air and water, we're sipping White Hair Silver Needle tea as the atmosphere's getting thin:

Hey, Bam, if you're just changing your pad in there - Are you on your period? Just FYI, in future you don't have to go all the way to the bathroom just to change your sanitary pad. I don't mind if you do it in front of me. (23)

Someone's been sleeping overnight at the office: "wet towel...tooth brush..." (37)

In her introduction to Danklands, Astrid Lorange describes the book as an "index of labor" (i). Danklands is also a document of the dissolution of labor and leisure into one another: Is downloading labor or leisure? Is uploading labor or leisure? Nobody in Danklands has a job...apart from Pansy at the ice rink, though there's rumors Bam used to work at Valleygirl...Andre is an artist and Bam is a writer: "I make $3 an hour." (45)

Our apartment is actually a ghost in the shell within this apartment block. That's why we don't have a letterbox, and that's why they use our place as their base when cleaning all the windows from outside…We don't exist on any council plans….In MySpace genres I'd call it cobweb/net-art/prayer room. In emoji: crystal ball, toilet, water feature, red pawprints. Janitor's closet. The Shining. (23)

In Danklands it isn't hard to have an apartment, iPhone, MacBook. It's just hard to breathe, and to wake-up:

One forgets the exact feeling/formation of pain. (49)

Over 39°C for five consecutive days:

The beheadings kept coming. On Twitter Hannah Black said "dont share pix of that poor dead white man, think of the family *shares pix of dead babies in gaza*," "sorry if u wanna look at pictures of dead people u gonna have to stick to dead black & brown people or else its immoral." (69)

I fingered your girlfriend for the first time today. she has never had sex or been fingered. I don't know if she has ever masturbated, but I had slightly long fingernails….(83)

Time runs out for everyone:

I am so scared I haven't installed enough artworks in the text yet. I haven't done one unboxing. (54)

Why would you care more about finding a body than finding an external hard drive? Both house data and experience, both to a certain extent sentient. (93)

Dredging swamps and data at the end of the world, LDR (long-distance relationship not Lana Del Ray):

Stan using iPad to look up how to do dredging in a black iPad 2 3 4 Military Tough Hard Rugged Heavy Duty Shock Protective Survival Case that feels thick and heavy to touch, and he's wearing fatigues (99)

romeo + juliet sex and an extra stabbed in the filming (100)