Like all the other Chinese social networking websites that became successful in China, Bilibili/哔哩哔哩弹幕视频网 is modeled on an original idea; yet this time it wasn't from the USA, but from Japan—Niconico, which was launched in 2006, four years before Bilibili. "Unlike other video sharing sites, however, comments are overlaid directly onto the video and synced to a specific playback time. This allows comments to respond directly to events occurring in the video, in sync with the viewer, creating the sense of a shared watching experience."(Wikipedia).

This "shared watching experience" is everything— the experience is manifestly shared with others. A video can't be watched unless it is watched with comments. China had 640 million internet users by 2014, and 500 million of them are mobile users thanks to the fake/shanzhai iPhones. From one side of The Wall, the Chinese internet appears to be a barren wasteland; yet despite its limitations, it has been evolving and growing. This makes the Chinese internet quite unique. Just as it occurs "over the wall," new memes are created depending on what underground culture decides to make in reference  to mainstream culture; the same holds true for the Chinese internet.

The main reason  Bilibili is popular is because internet memes are created rapidly here in China, and it is exciting for people to see new memes being used in video comments. Those comments containing Chinese internet memes are usually extremely sharp and very funny; this great sense of humor usually comes from self-censorship, like 草泥马/Grass Mud Horse. Most of the time, a video is  trending on Bilibili not because it is so good, but for the opposite reason. It is because these videos are so amateur and badly edited —it is not about the video anymore, it is about making fun of the video (吐槽/scoffed at). For example, "iPhone is almost Garbage" is a remix of an original video made to promote a Chinese smartphone brand called Jin Li. In this video, two men dressed in police uniforms shout about how good their products are and how only posers would spend so much money (the price of an iPhone 6+in China is about 2 months' average salary) on a phone that is easily damaged, tacky and badly designed. The video equates the iPhone 6 with garbage, while live streaming comments float over the men's faces. Comments read: " OMG, this video is so bad it brain-washed me." "Have to watch this bad video every day." and "I just threw my iPhone into the garbage can".

On Bilibili, then, you do not watch the video again for the video, you watch it again and again for the comments. This is precisely what inspired me to make the piece, "iPhone Garbage", where I designed a remix of the official Apple iPhone 6 commercial and excluded its original soundtrack, replacing it with the man screaming about how iPhones are garbage. In addition, on the right top hand corner of the page, there is a gif animation of water pouring from the bottle through the video player, into the Apple logo pond and finally onto the still image of a real apple already being splashed by water. "Water Apple" (or 水货苹果 in Chinese) literally means "parallel imported Apple products." These are products that are smuggled strapped to the bodies of people into mainland China so that import taxes can be avoided and the products can then be sold on Taobao (the Chinese quivalent of eBay) or in electronic markets for a more affordable price than buying them in a legitimate Chinese Apple store. 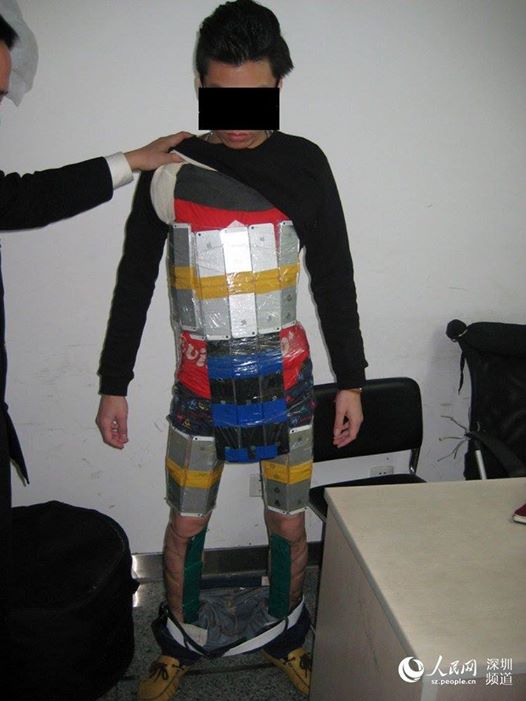 The most popular Bilibili video of all time is called ""When smart meets wash-cut-blow". As you can see, live comments quickly flood and cover the screen, masking the music video itself over time. This shanzhai Chinese music video was originally from a K pop band, but was remixed by a Chinese netizen into a love song about the story of a SMART boy who falls in love with a girl, but is worried her family will not like him because he has no class. He decides to become a salon boy to learn how to cut hair and be fashionable so that they can have a sweet life together drinking Coke, Fanta and Wanglaoji (a popular canned tea) every day. SMART or shamate is a subculture in China composed of young migrants from the countryside who remain alienated amid the great urbanization push. Their fashion style is a gawky blend of goth, glam and anime; they are also the largest group of people who are still using internet cafes and local Chinese electric devices. Since this video is so popular, sometimes you can barely see the video itself. The lyrics have been translated into 5 foreign languages in the comments and are covered in comments like "I feel wasted after watching this", and "I have already repeated this 12 times."

Of course, another reason why Bilibili became so popular is because, unlike the original copied site, Niconico, which only allows people to watch videos if they are registered users, Bilibili allows everyone to watch the videos. Only users can leave a comment, however. (The membership is free, but you have to answer 100 questions about animation. If needed, you can buy a membership on Taobao for 1RMB/0.16 USD without taking the test).

In the latest season of South Park, in episode 9 #Rehash and episode 10 #happyholograms, Kyle wants to play Call of Duty with his little brother Ike, and realizes that all Ike and his generation want to do is watch other people's comments on other people playing Call of Duty. Kyle gets very upset over this, because he does not want to feel like a "grandpa." Meanwhile, Cartman makes his own channel on YouTube, "Commenting on people's comments." What is interesting is that the main users of Bilibili are people who were born after the '90s. This generation is very different from the first single-child generation, (the post-80's), who are more nostalgic. They have experienced China's "Great Leap" into material life, and are more unconsciously "inauthentic," favoring facade over content; the post-90's generation grew up with many material objects in their lives and tend to focus on content over form. Bilibili is very blunt— the comments flying around make it almost ugly to the visual taste of the post 80's generation— but that is exactly why it is so lovely. 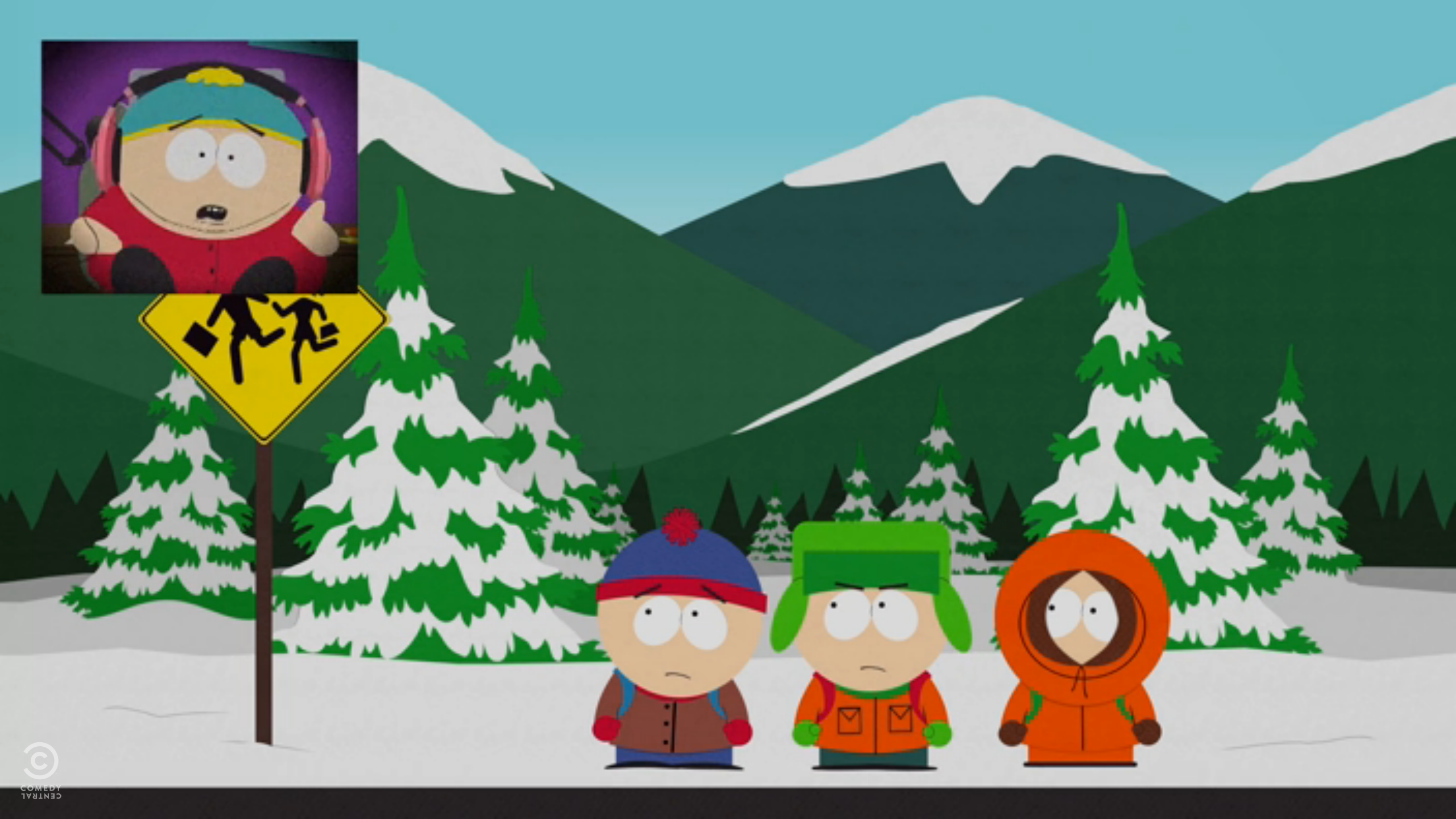 It was mind blowing for me to see these 弹幕/bullet comments on Bilbili for the first time. As an artist, it is visually stimulating to see moving text floating in front of a moving picture. Also, since all the comments are live, it makes the video into a canvas. Leaving a comment is like drawing on the video. From a net artist's point of view, it is a tangible "social hologram" of the video..... As a Chinese net artist whose VPN had just expired just when I was feeling insecure and left out (like being alone in Silent Hill), right in the corner there is this local internet carnival full of people. Despite its limitations, the Chinese internet is exuberant and full of highly creative netizens. To use a Chinese internet meme to sum this up: "Watching videos from Bilibili will make your brain hole/脑洞 (aka creativity) wildly open."