Exhibition as Interface: An interview with V4ULT 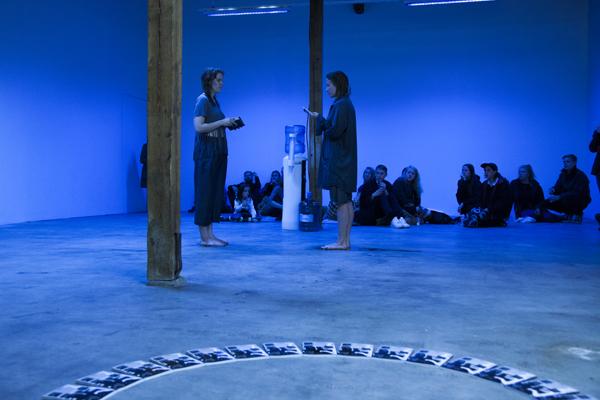 Anni Puolakka and Laura Jantunen, performance/reading/book launch of V4ULT publication A gesture waves us on, answering our own wave (2014), SIC, Helsinki.

V4ULT is a curatorial platform initiated by Anna Mikkola and Hanna Nilsson in 2013. Taking place in various built environments, in book form, and online, the project has been described as an "interface" through which people, ideas and artworks move. The project's website has been archived by Rhizome using the dynamic web archiving tool Webrecorder (developed by Ilya Kreymer), and Mikkola will take part in a forum organized by Rhizome at the New Museum on the topic of the Born-Digital Art Institution.

The first iteration of the project took place in a walk-in closet in their former studio in Berlin. One exhibition in that space, "Breathing Kevlar, Perforated Skin," presented works that could be held in your hand. The accompanying website for episode 1 included documentation video for each exhibition, accessed by clicking on a black rectangle at the top right of thepage, with each video displayed against a custom background with stills of the online work that was part of each show. Each video documented the exhibition from the point of view of an investigating visitor–zooming into details of the work, swooping around the room or slowly scanning across it with the subtle shakes of a handheld camera. By moving away from a sterile exhibition documentation format, the exhibition in the space and its online experience became less disparate and felt more intimate. 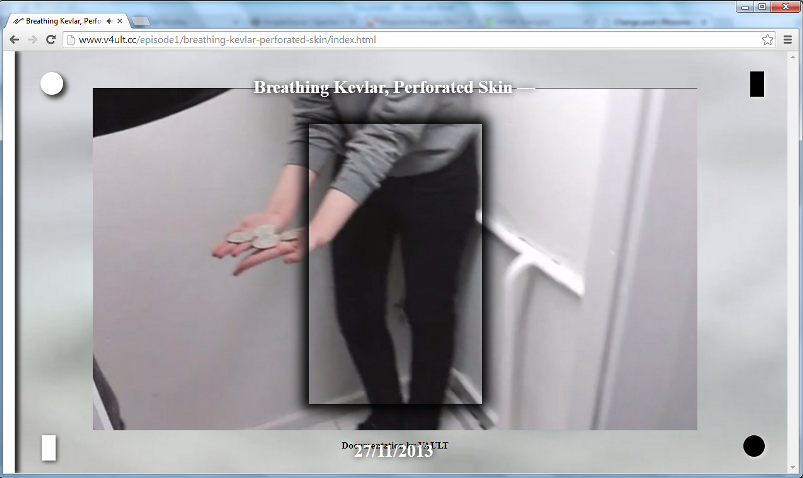 Screenshot of documentation of "Breathing Kevlar, Perforated Skin" on V4ULT.CC

In 2014, V4ULT edited and designed the print publication a gesture waves us on, answering our own wave, published by NERO. The publication discussed various angles on interfaces and interfacial experiences; it used the margins of the page to include found images and quotes from previously published texts which framed the printed page itself as a potential interface. The publication was launched in Berlin, London, and Helsinki, which included a performance directed by V4ULT,  of two actors reading water-soaked excerpts from the book. 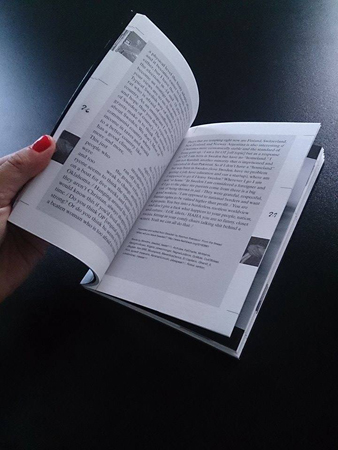 A snapshot of V4ULT - Anna Mikkola & Hanna Nilsson, Eds, a gesture waves us on, answering our own wave (2014), published by Nero

The second iteration of V4ULT, running between December 2014 and March 2015, took place in a refurbished industrial building in the Treptower neighborhood of Berlin, where their work studios are also located. It consisted of solo and group exhibitions into which temporary interventions by another invited artist were inserted. The interventions took form in video, performance, and sound. Each intervention was documented within the pre-existing exhibition and featured on their website. For this episode, the website was redesigned; while the documentation for episode 1 was more constructed, the website for episode 2 felt like a live window into the space, with full-screen video documentation of the most recent intervention. I spoke to Anna Mikkola and Hanna Nilsson via email about their amoeba-like curatorial approach and the practicalities of experimentation while working as a non-profit space.

What were your curatorial aims for this iteration of V4ULT?

V4ULT surfaces in episodes, each inhabiting a different space and presenting art through a certain structure that we have created around the episode. The most recent episode explored what type of interpretations emerge from the work when two practices overlap. Layers, clashes and frictions. The episode included three solo shows and a group show. In addition, we inserted two interventions into each show, so there were events in our space almost every other week during the four months that the episode spanned. The interventions were time-based ‘performative’ works like video screenings, performances, readings, and sound works either invited or directed by us. It is important for us to move from a static exhibition format to a dynamic one. In this episode we approached the exhibition as a stage where different actors, the audience, the art works and practices come together either in agreement or dissonance.

The starting point for the interventions is thinking about art beyond authenticity. We create situations, spaces and constructions that invite the layering of practices. It's easy to feel confined by different pre-determined roles and expected ways of working. With V4ULT, we try and create a practice where we can work in different roles, as editors/directors/writers/curators/designers/artists. Based on our experience, collaboration and participation are never seamless, so we create situations where frictions are bound to occur in the midst of dialogue. Openness to tensions lays the ground for discussing them. Both of us work through pseudonyms often, because that allows a certain freedom of movement and the creation of multiple identities. V4ULT is one of our identities.

We aim to create spaces and situations where different entities meet and coexist. An example of this way of working is the group show "IMMUNITY (chorus)" that we showed at the end of March 2015. The show was a 2 hour long performance where the space was a stage for a drama and the art works played a central role, looking into ways to mobilize the works. The play that we directed involved three actors who performed a ritual where soil was carried into the space in an endless loop. There was no static view of the "exhibition," because the art works and the lighting were moved around, altering the focal point. The performers were gradually burying the art works under the soil—hiding, protecting, concealing, and storing them for another moment in time.

What were some of the principles that guided the design of the website?

We approach the design of the website in the same manner that we work with the particularities and limitations of the spaces we inhabit. We try to push the boundaries of what's expected from a website, to make the website into a dynamic space with depth. Often we enhance the limitations that come when working in a browser window environment by making the use of its particularities in the design.

Each episode has its own website design, which reflects the architectural setting and the structure of the episode. In Episode 1 one of the works was only shown on the website to explore how the show appears to the viewer when it's divided between the spaces. The documentation of the exhibition included screenshots of the online work and video documentation of the works shown in the space. They are overlaid with each other in the archive section. We commissioned Hanne Lippard to create a spoken word work for V4ULT.

Through the fragmented video documentation we push forward the idea that contemporary art is open to interpretation. Documentation images taken so as to appear neutral or objective produce a specific view of the artwork, so we try and see in what manner a more subjective interpretation can function. 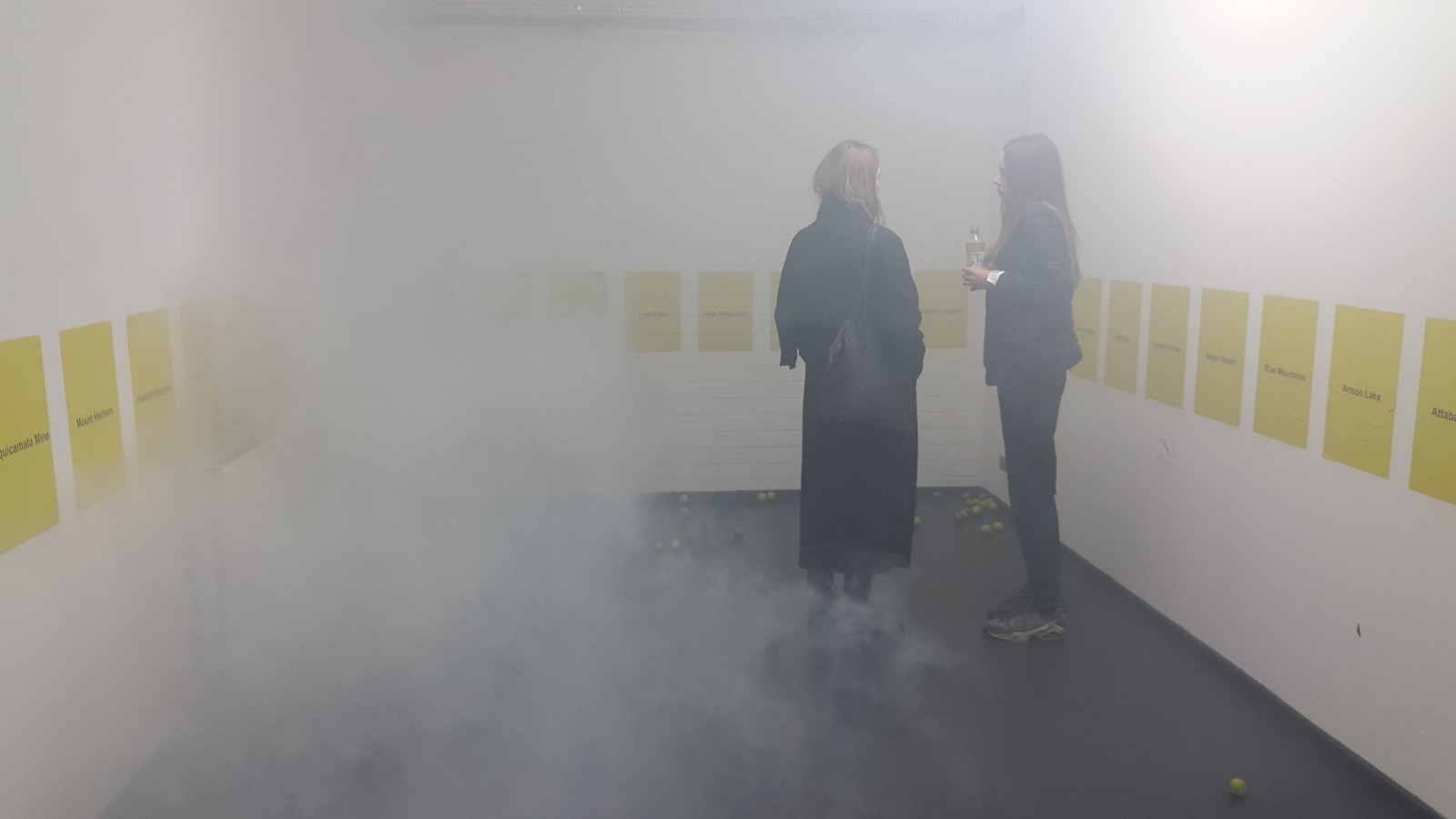 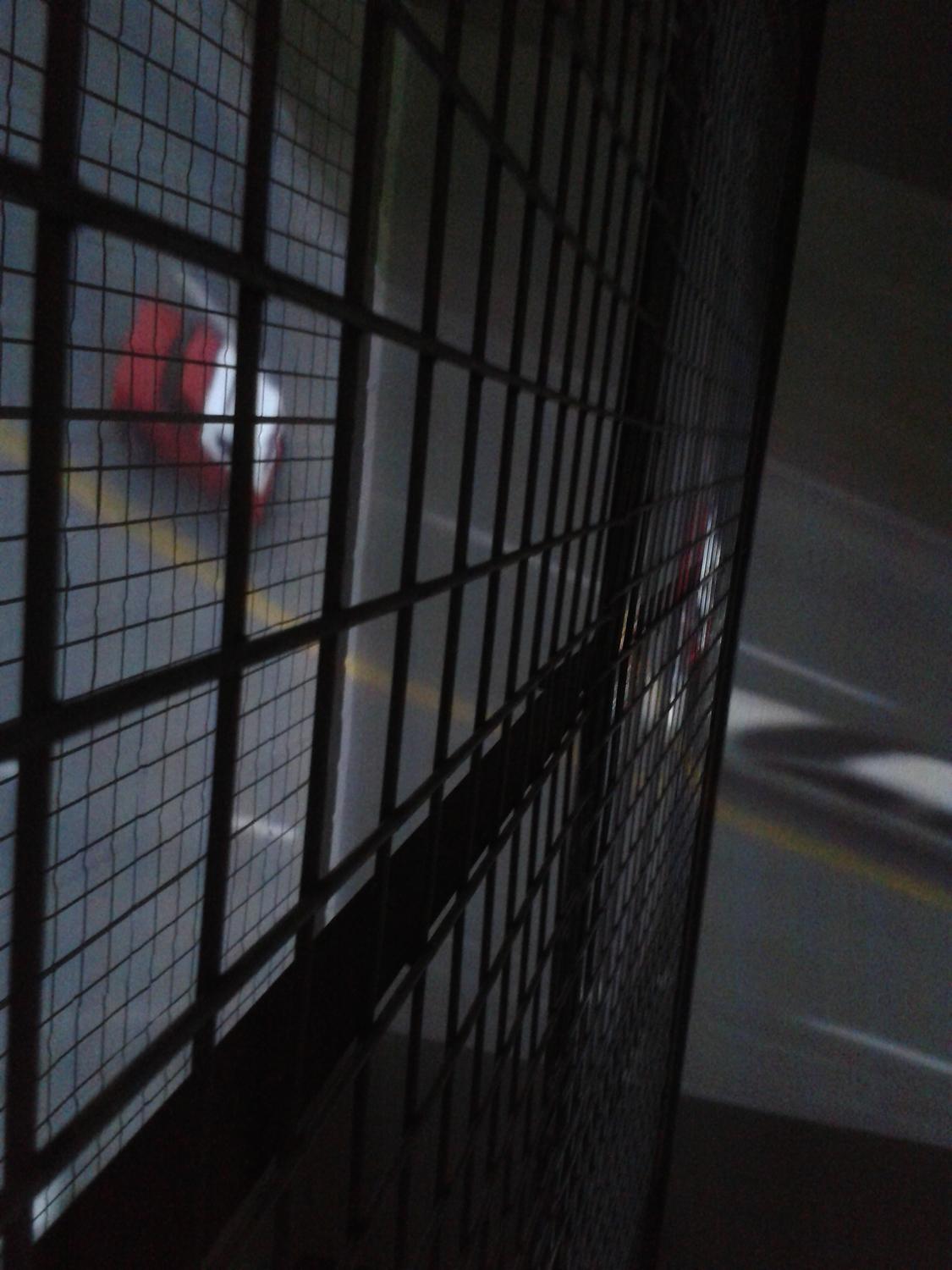 Kernel. Enclosures (First Attempt) (2014-2015) intervention by Neil Beloufa, The Analyst, the researcher, the screenwriter, the CGI tech and the lawyer. V4ULT, Berlin. 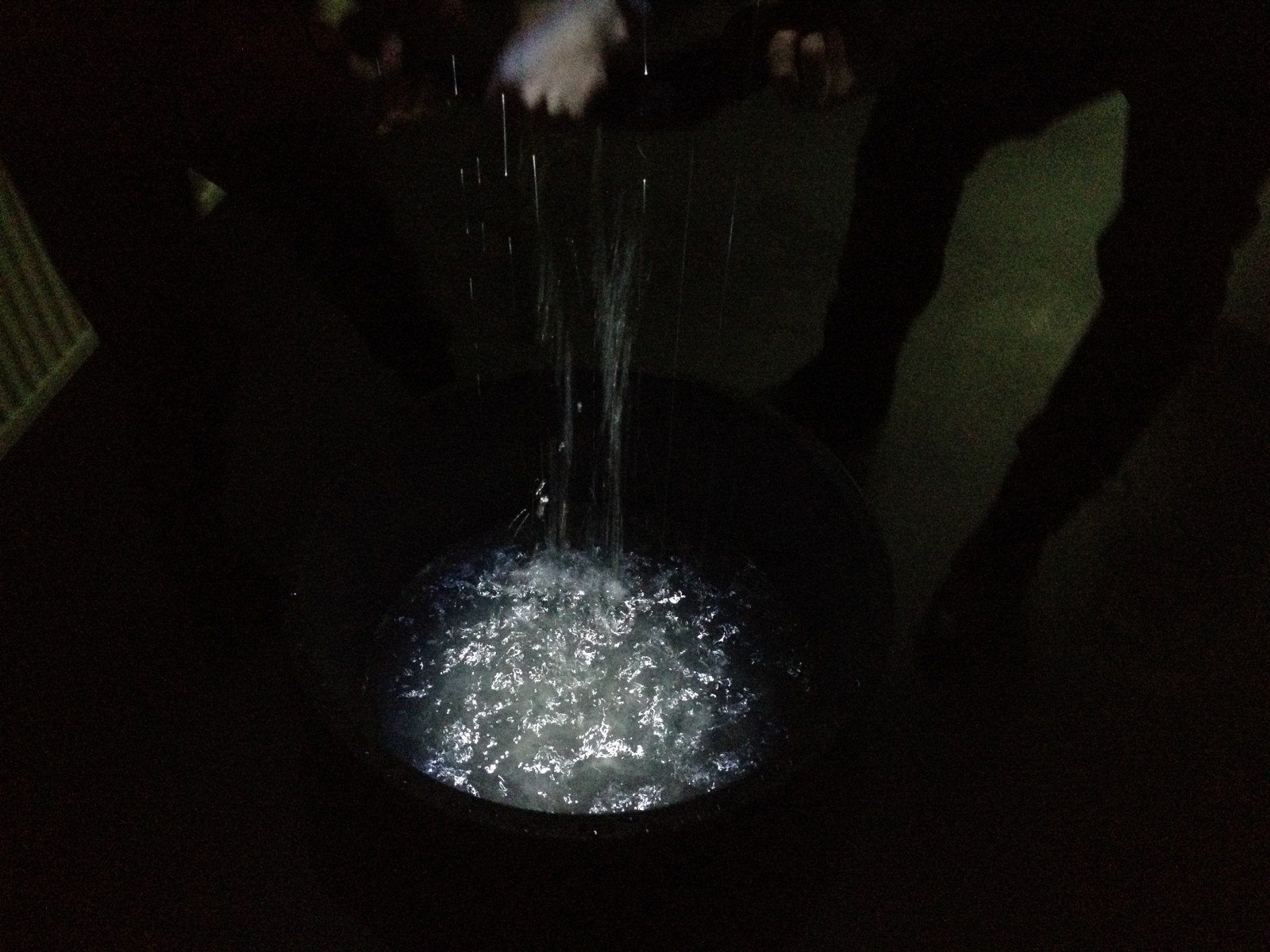 How do you see V4ULT working with or against the traditional idea of a "non-profit" space? What are your general thoughts about the non-profit category and what it means for the programming?

We see V4ULT more as a platform than a space. Thinking of it as a platform allows more freedom to direct the project towards courses that respond to our evolving interests. It’s important for us to keep the project growing and transforming in parallel with our own practices. V4ULT allows us to test new ways to work, collaborate, direct, edit, and curate. We also work with artists to create new forms and formats.

For the sake of V4ULT being a testing laboratory, it would probably be hard to turn it to a commercial gallery. At the moment this isn’t a topic of discussion for us, since it doesn’t seem particularly relevant.

How is the project supported financially? What do you do to support yourself as you work on V4ULT?

We have received grants from The Nordic Culture Fund to fund the costs of both of our episodes. We cover the flights of the artists who we invite to have solo shows with us and give them a modest artist fee. We have also received work grants for our own artistic and curatorial projects, in addition to both working with design on our own ends. Hanna runs PWR studio with Rasmus Svensson.

How did you find the gallery space; what is the general demographic of the area—is it mostly industrial, or do families live there?

We chose the space because it is in the same building as our personal work studios. The whole building, which at some point was an industrial laundromat, is at the moment used as artists studios. It’s important for us that the space is intimate and easily accessible. The area is a bit remote, consisting of a mix of industrial and residential buildings - very different from Kottbusser Tor, where we hosted the first episode. We finished the 2nd episode at the end of March and closed the space that we have had for the past 4 months. Now we are editing together a longer video documentation from our last group show and we will see later on what form V4ULT takes next. 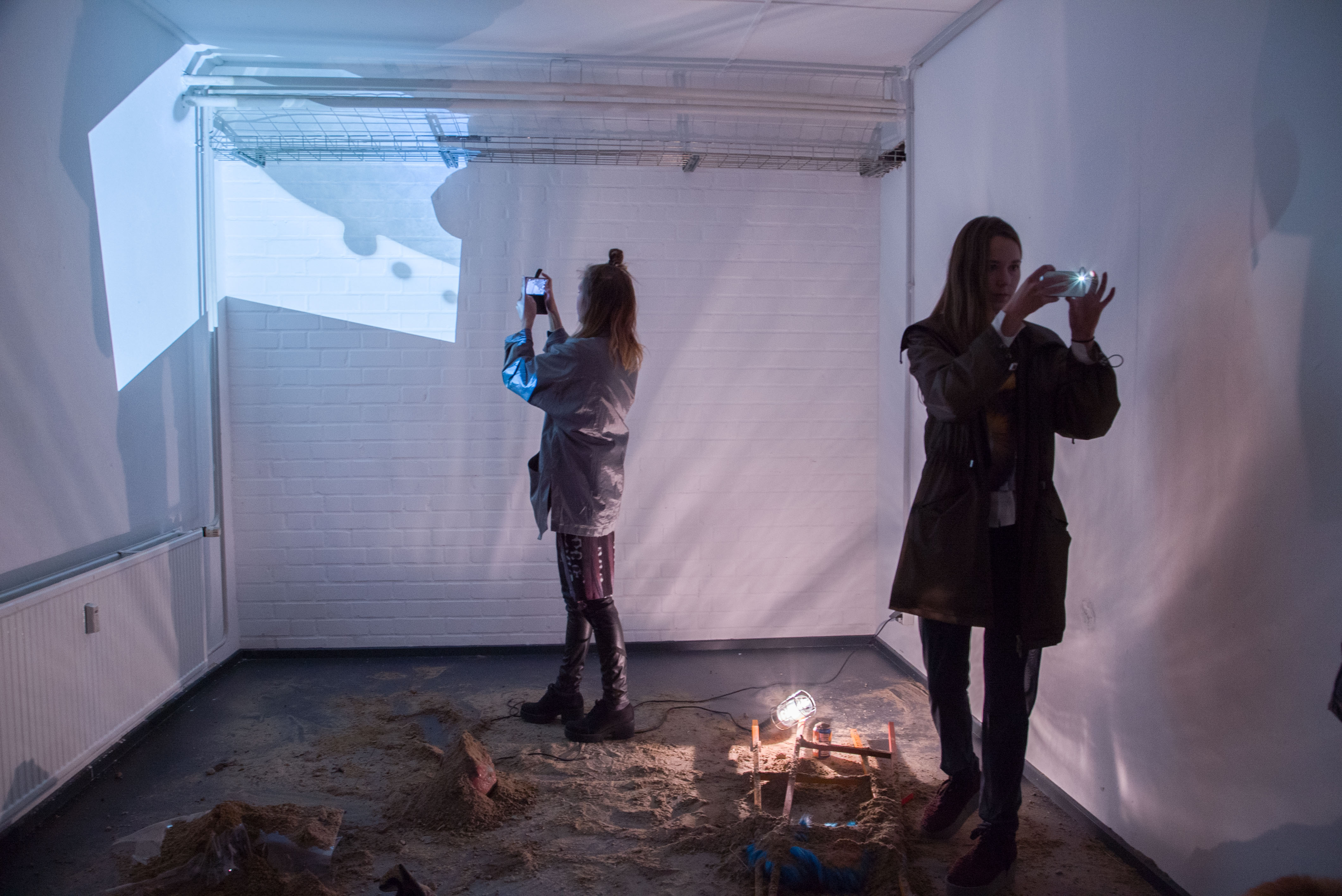