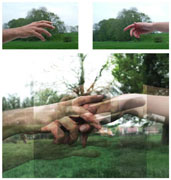 TRANSMISSIONS crystallizes the integration of creativity in the arts, science and technologies. Today research, experimentation and creation in new media are, by their volume, at least comparable to what could have been produced in the 1960's, with the development of mass media. The hybridization of the practices and the digital components between the scientific, technical and artistic fields invigorates inventive processes, experimentalism, interdisciplinarity or transdisciplinarity. The artists are unceasingly exploring the potential of technology for new relations with the world, new constructions of knowledge and new social spaces and means of expression. The researcher thus intersects with the artist or the mediator, in their common zest for experimentation.

TRANSMISSIONS will present, in their authors' presence, the works and the devices that are the results of research in progress, thereby encouraging exchange and dialogue between the public and the authors as a creative approach to technology.

Given the multiplicity of image formats and an increasing complexity of our relationships with them, TRANSMISSIONS traverses the non exclusive axes that deal with the common concerns of the artistic, scientific and heritage fields:

Screen/Surface: the willingness to leave the image on the computer standard screen, to invest other materials and supports (as in Electronic Shadows presentation, at ICHIM 04);
Sonic experiments: the wealth and diversity of experimentations with sound;
Body-as-Interface: supplanting technical interfaces in favor of a more intuitive interaction between the body and the device;
Hybrid reality (Global Positioning System and Augmented Reality): physical and digital space fusion, experiencing space;
Archiving and indexing: Constituting, locating and hijacking network content;
Time-space laboratory: New articulations in time and space.
Back to the future: Experiments in Art and Technology: rediscovering the pioneering role of E.A.T. in the domain of research at the intersections of art, science and technology.

Low-fi gets physical at Stills

Article written about the Low-fi exhibition can viewed at Mazine -
www.mazine.ws
Written by Marc Garrett and Ruth Catlow
(from www.Furtherfield.org)

Josh Nimoy has developed Icons == Function for a commission by HCI-Fun and the F.A.C.T center. These seven interactive musical compositions use simple combinations of sound, form and colour to analyze the relationship between the functionality of user interfaces, and their iconographic facades. The body of work attempts to eliminate the divide between the outer and inner parts of "the machine" and invite players to explore how we use and interact with computer. Each piece is an abstract visual sound scoring language capable of playing itself back as users give input.

When users browse the thumbnails looking for a state to load and play, they do not see a textual name given to the work, nor a proxy graphic that explains the function by some cultural mapping. Instead, users see the code itself.

Susana Mendes Silva keeps creating interactive performances and by (in) doing so continues to investigate the nature of social relations. After Artphone and art_room, two performances in which the spectator (user, to be more accurate) had to interact with the device created by the artist, a technologically mediated question-answer situation about contemporary art, Silva developed Live Art.

The assumptions are the same. Even the name of this new performance reminds us of the previous ones and how much she enjoys questioning the boundaries of traditional art, or at least of a commodified, object driven art. In this project there is again a device the artist created, but not a digital one, or at least not one at first sight. It is a t-shirt with information concerning the performance. The information, the technical details of the work of art, functions as the instructions manual for the performance, defining how it is supposed to work.

Read An Artist in the Chatroom, a text discussing Silva's performance art_room

-click thru for more on the piece, and check out source code - http://vercodigofonte.blogspot.com/- for a related discussion

Originally posted on networked_performance by luis

The Yes Men  are a group of culture jamming activists.
They pretend to be powerful people and organizations and then use
their newfound authority for practice what they call “identity correction

The never boring DJ Spooky teams up with the Museum Of Contemporary Art in this Flash toy that allows you to remix artist Marcel Duchamp with suitably poppy-clusterfuck sound and vision. Not hard to draw a nice straight line from Duchamp's "found object" style of mix art and DJ Spooky's sonic pallet.

A couple of Duchamp sites we like : Duchamp.org, and Making Sense of Marcel Duchamp

And of course, DJ Spooky's site

Originally posted on Screenhead by Rhizome Wearing headphones and using a joystick, the player has to shoot up sonic invaders conquering a virtual room as defined by panorama, pitch and volume. Starting with a simple hear-and-match mechanism, the advancing levels transform it into a tonal and musical interaction game.

A Shot in the Dark

Trying to encapsulate all that the African continent has to offer in one contemporary art exhibit is a daunting task. An abundance of countries, artists, and themes congeal in 'Africa Wired,' Eyebeam's odd mix of videos, films, a performance, two installations, net art, and a Johannesburg-based e-zine. This show and screening, running October 4-6, are meant to explore the relationships between youth culture, music, and new media, in Africa. The included work ranges from a documentary about hip-hop in South Africa and Brazil to new pieces by the brilliant duo, Mendi and Keith Obadike (who are best known for selling the latter artist's 'blackness' on eBay, in 2001). The curators have done well to combine interesting and quirky works with a few more politically-edgy pieces. The show is a necessary first step, by the new media scene, toward promoting African art as it is, without the Western premise of 'mapping the dark continent.' - nathaniel stern