All artists have their obsessions. For Andy Warhol it was cows and cans, for Yves Klein it was the color blue, and for Lee Walton it's a little red ball. This tiny, soulless, inanimate object has become the subject of some very public displays of affection, in Walton's aptly-named 'Red Ball Project.' For the last few months, the artist has been asking readers of his website to post suggestions for places at which to abandon his loved one. Once he received 101 posts, the self-proclaimed 'Experientialist' designed a highly-scientific and nutritious means of narrowing-down the list of dumping grounds. He calls it 'The Pepperoni System.' Numbering each submission and narrowing them down on the basis of chance allocations of pepperoni pieces, on the New Yorker's lunch of choice, Walton will eventually let kismet (and calories!) decide where his ball is to be set free. Meanwhile, his website plays host to his humorous video updates on the abandonment process. - Marisa Olson

The ICA's Digital Studio has just opened the first solo show in the UK of Vuk Cosic, one of net arts pioneers, including a specially created piece called File Extinguisher. This extremely useful online service lets the user delete their files with absolute certainty.

"It is just some small joke really that I planned to make for a long time..., " says Cosic.

The show runs till October 6, at ICA, London.

I've just come out of a presentation by Theo Jansen of his StrandBeest, huge creatures made out of electrical tubing, cable clips and other cheap materials. Jansen is an engineer/artist who has spent the last 15 years evolving the StrandBeest as wind-powered walking beasts that roam the sand of the beaches where he lives. They are beautiful creations, awe-inspiring in their complexity, and graceful in their movements.

Jansen has used evolution simulation to develop more efficient joints for the creatures legs, and has now developed techniques (using plastic bottles and netting) to store the wind that blows along the beach and use it as power for the StrandBeest. His current research is in developing systems of 'liars' - simple yes/no logic gates powered by air and tubing. He is developing these into networks that are either dynamic, and therefore can drive movement, or are static, and can store information. He believes that the StrandBeest will be able to count their steps, realise when they are approaching the sea, or even pass knowledge on to new generations of beasts.

The presentation was part of this year's Ars Electronica festival, a series of exhibitions and symposia on the theme of 'Hybrid'. I've been to a few of the talks, but much of the interpretation of the Hybrid theme has been far too esoteric and academic, and I don't have the stomach for that kind of debate any more. I caught the end of Neil Gershefeld's presentation via webcam of his FabLabs and Internet 0 projects, which ...

The King of Digital Art

Gallery owner Steven Sacks is turning high tech into a hot commodity. Next he wants to bring new-media masterpieces to the masses. By Tom Vanderbilt of Wired magazine.

An Analysis of Jenny Marketou's "Translocal: Camp in my Tent"

Displacing Identity and Privacy: An Analysis of Jenny Marketou's "Translocal: Camp in my Tent" by Amanda Beattie [PDF] [via Sousveillance]

The RFID video player is a program that plays videos full screen, the playback is triggered by placing an object containing a tag on the reader.

The software detects the tag and plays the video associated with it.
It's written in perl and runs on mac os x by controlling the VLC video player and it's very easy to make it run with other configurations.

By Massimo Banzi.
Via del.icio.us/rfid

TEMPEST is based on the surveillance technology known as Van Eck Phreaking - computer screen content can be reconstructed remotely by picking up the emitted EM-field of the screen. TEMPEST utilizes this technique to transform purely generative graphic into a composition of noise which again is fed back into the image generating process. Several AM receivers are tuned into different frequencies of a screen and plugged into an audio mixer for further sound processing. The graphics on the screen become a means of producing sound and it is only the graphics which determine the different timbres and rhythms.


i'm hoping some of you can download and test the new version 2 (beta) of CarnivorePE. to solve previous bugs in the windows version, the app has been completely rewritten in java and has been tested on MacOSX, Win2k+XP, and Slackware Linux. if you like, you can test it here:

please let me know if it works for you. feedback always welcome...

if you have made a carnivore client in the past, fire it up and let

me know if the new carnivore works with your client. backward

compatibility is key, so let me know if you have problems... 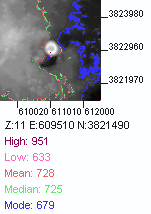 The C5 Landscape Database API 1.0.3 began as a Digital Elevation Model browser and data export tool, (DEM Tool), written in java. Now a part of the C5 Landscape Database API packages, the C5 DEM Tool is still useful for browsing a collection DEM files via a simple graphical user interface. But since the original release of the Dem Tool utility and related classes in 2002, the library of related Java classes have grown and were significantly reorganized. The mission of the API also drifted as C5 theorized the relationships between landscape data and art practice and began implementing software mediated performances in the landscape, all of which led us to theorize more, rewrite the software, and perform yet more experiments in the landscape. Now merged with the capabilities of a number of C5 Perl modules (which were retired after being ported to java this year), the software has evolved into a robust platform for data mediated practice in the landscape, through much experimentation and performance during the course of developing the C5 Landscape Initiative Projects.