Control electric guitar with your face

A modified real-time head-tracker communicates via a TCP/IP socket connection to a custom server program. The server manages the mapping of sensed gesture onto control messages, which it sends to a guitar effects processor via MIDI messages.

Videos on the webpage.
PDF of the project.

The trAce Online Writing Centre has announced a call for papers for a new issue of Convergence called “An End to the New? Re-assessing the claims for New Media Writing(s)“. This special edition will seek to re-assess the claims made for these forms over the last decade, to challenge the dominant ideologies and terminologies of this [...]

From September 19 to the 25 I will be in Leonding Austria for Leonart 05. MTAA will be showing the KDM100

This is our 2nd Mac Mini driven artwork and I excited to hook it all up and see it run. I am also excited to explain to customs that the small mac-mini in my bag is art. That statement and my weird passport photo might be a problem. If you have any travel or art or tourism tips, please send them on or just wish me luck.

Robin Sloan's  + Matt Thompson's flash documentary on how the current global media will change by 2014 and how media events will be systematically changed based on how we want to perceive them. Watch it HERE

Also, Chihcheng Peng's currently doing a great job, over at the Eyebeam ReBlog, gathering the highlights (and lowlights) of NY's 'back to school' art season...

The Urban Lottery: A Game to Think Through the City

"The game consists of a journey through a series of images, concepts and words that have different meanings for contemporary urban residents. For women, for example, everyday life in the city is a very different experience than it is for men. The gaze of a person who walks through city streets on his or her way to a factory job is different than that of a person who contemplates them from an office in a downtown skyscraper, or who looks out in fear across the heavily fortified fences that protect his or her private space.

The Urban Lottery invites you on a never-ending adventure-to think through the city and to think about yourself in relation to the city that you inhabit. It does not matter what city you live in. What matters are the ways in which you explore, discover and understand that city and your relationship to it. Most important, however, are the ways in which you become involved and participate in building a better, more democratic city in which there is room for all."

Part of Translocal Flows: Migrations and Contested Urban Spaces in the Americas

Originally posted on Space and Culture by Anne

Chris Ashley presents greatest hits from two years of posting daily html drawings. Not to take away from any others, but this one's a beaut (Four, July 28, 2005, HTML, 404 x 344 pixels).

The participation of Chris, jimpunk, Linkoln, and me in the empyre listserv forum in June, as "artists who blog," seems to have thrown a spanner in everyone's works. As explained here earlier, it went badly, with the moderators allowing a bunch of faux-academic boors to bash blogs and bloggers. I bailed after two weeks and still wake up in a cold sweat. Shortly thereafter, Ashley went on hiatus from daily html drawing posting (since resumed with added photo-imagery), jimpunk disappeared from Screenfull, followed by Linkoln, after posting a "searching for jimpunk" drawing. Maybe "artists blogging" is a fragile thing, even if the artists aren't fragile people, a pursuit to be cherished and supported as opposed to acting all threatened about.

To understand 'File Extinguisher,' you've got to understand Vuk Cosic--which isn't always easy. Who else would create the 'ASCII History of Art for the Blind?' 'File Extinguisher,' the latest work by this pioneer net artist, claims to rectify an error in engineer Paul Baran's seminal Rand Memorandum, RM-3420-PR. First published in 1960, the document blueprinted a communication network invulnerable to nuclear attack. Cosic uses the memo to springboard into tongue-in-cheek land. Due to the limitations of print technology, in 1960, Baran's document omitted a red dot identifying a file extinguisher as the network's last-ditch safeguard. "We can now recognize that today's internet vulnerabilities are a direct result of this tragic mishap," says the artist. His site presents a map that restores the file extinguisher, which looks remarkably like a fire extinguisher and can be used to browse for and extinguish users' files. Fusing retro-technology with Cold War paranoia, this project is as much present-day social commentary as it is vintage deadpan. Cosic says of his project, "Now the internet is finally safe, as Baran originally intended." Whew! - Peggy MacKinnon

The return of the Net Art Open

The Net Art Open is back after the summer break with lots of great new work and as always full archives of all previous projects. Subscribe to the RSS feed to keep up to date automatically. 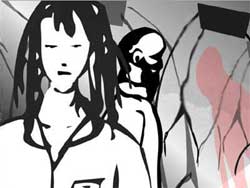 ryan griffis:
"For years, governments all over the world have secretly been collaborating with the high-end color laser printer industry in order to track the origin of every color copy made."
http://www.alternet.org/columnists/story/25165/