...McLuhan claimed some decades ago but nowadays we are simply already immersed and embedded ..Arthur C. Kroker (editor of ctheory) states that we live in the electronic culture that he (McLuhan) prophesied. And since he wrote about it, technology has become more pervasive, but silent. It's invisible. An elder article (written 2005 to remind McLuhan's actuality 25 year after his death) gives..(an) overview on McLuhan's opinions and as well both the enthusiasm and critique his thoughts evoked.

"For the first time, the central nervous system has been 'exteriorized," says Kroker, U Vic's Canada Research Chair in technology, culture and theory. "It is our plight to be processed through the technological simulacrum" in a "technostructure" which is nothing but a vast simulation and amplification of the bodily senses." McLuhan's early (1960s) wake-up call about the extent to which people's very identities are determined by the tools that they themselves invent can be listened to via these two links of the old recordings.

=== ARENA (discussion list) https://my.binhost.com/lists/listinfo/arena To send a message to this list, simply use this new e-mail address: arena@lists.virose.pt

E-zine vector Series [b] new issue [b#16 - May 2006]. It includes a project by Susana Mendes Silva [Sheet - 2006] , and texts by Lev Manovich [Remixiability], David M. Berry & John Pawlike [What Is code? A conversation with Deleuze, Guattari and code], and Krystian Woznick [In The Digital Valley: Net/language - B@bel, Aymara.org and the internet as a cemetery of languages].

We are still preparing the next issue (x#05 - LOCATIVE MEDIA) and looking for papers and projects.

Please check our web archive for information on our exhibition history http://www.imagesfestival.com

PDF's of submission & guideline forms are downloadable at http://www.imagesfestival.com/generic.php?id=28&heading=submissions

For more information, or to have a submission form sent to you please contact <submissions@imagesfestival.com>

tesla, a great space in the Berlin mitte, right across from Alexander Platz, is dedicated to the production and exhibition of new works encompassing installation, performance, sound and radio works.

Artists are given studio residencies and plenty of support to produce new works. As the directors of tesla, carsten seiffarth, detlev cutters, and andreas broeckmann, describe the art center:

"tesla is of Berlin laboratory for media arts; for the investigation of the relationship between art and science, old and new, analog and digital media; for open and process oriented artistic and technological research; for the dialogue with current form artistic practice; for the development of co-operation and networks" -

Currently tesla is in collaboration with the festival sonambiente Berlin2006 in presenting new audio and visual works and giving sonambiente artists, like myself a studio for production. Here are a few images taken at last Wednesday's opening at tesla: 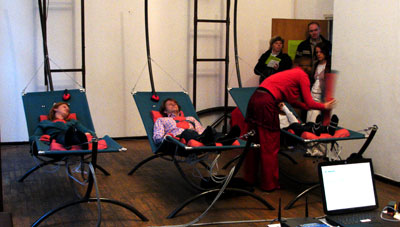 Participants lay in these hammocks that have various points of stimulation - at the hands, feet, heart and ears sound and some sort of mechanical devices embedded in pillows titillate and relax the participant. 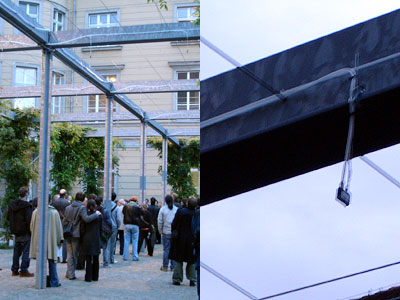 Embedded in a large steel grid that is permanently part of tesla's courtyard is Edwin Van der Heide's sound installation. The sound is created from air shot through valves. The valves are mechanized and digitally controlled to play compositions. At first the compressed air instrument is relaxing, but over time becomes abrasive as one stands below or near the pneumatic sound field. 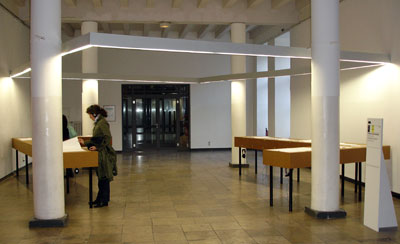 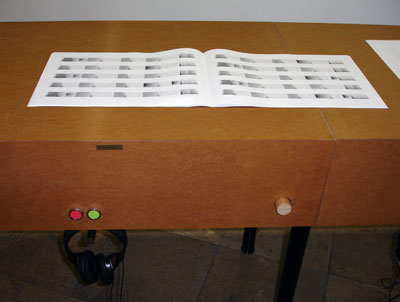 The wooden knob to the right is for the volume and red and green buttons are on/off - simple and elegant.

In the main lobby near the entrance of tesla is a work by graphic design students of ...

On Monday at the International Serious Games Event in England, "McDonald's Interactive" director Andrew Shimery-Wolf announced that "We can no longer stand by while McDonald's corporate policies help lead the planet to ruin." The group, he added, was breaking away from its parent company to directly address the fast-food giant's unsustainable ways. Inspired by the training videogame America's Army, MI devised a game that can simulate various environmental and business conditions and how manipulating different aspects can affect both the bottom line and ecological problems like deforestation. By running sims, they realized that Abrubt Social Change (ASC), not mere "ethical consumerism," is the answer. Shimery-Wolf told attendees at the games conference:

The concept of Abrupt Social Change, or ASC, is an old and respectable one, a shortcut from rationality to the nerve centers of power that has often accomplished what more systemic approaches cannot. The British Occupation of India, the Vietnam War, even feudalism in Europe were only ended through ASC movements.

And just as governments and NGOs have sometimes assisted ASC movements abroad, so we can be a force for Abrupt Social Change here at home. We in the Interactive Division are using all of our autonomy within McDonald's to do so.

One thing, we are appealing to McDonald's franchisees to allow their restaurants to serve part-time as meeting areas where plans for mobilization can be developed, hatched, and acted upon. We have commitments so far from seven owners in Decatur, Illinois, Tucson, Arizona, and Troy, New York.

2. We will offer direct financial assistance from our divisional budget to groups actively involved in effecting ASC, within or outside of franchisee restaurants.

3. We will help develop technologies useful to mass mobilization, such as the cell-phone text broadcasters so useful in the Ukraine in the recent Orange Revolution. As for McMarketplace, it will serve as a tool to explore methods for change, and to learn just how governments might be forced to adequately control corporations.

Again, we strongly feel that legislation is indeed our only hope, and what we must fight for via Abrupt Social Change.

"Ethical consumerism" or other market-based approaches will not help. A recent poll showed that 83% of UK consumers intend to purchase ethically on a regular basis; 5% actually do. And boycotts and other forms of consumer pressure are valiant but ineffectual, capable of producing only momentary, localized changes in corporate policy. As for "ethical investment," its potential is sadly quite small.

No, economic forces won't save us; there's a reason we have governments, voting, and laws that must be obeyed. But since governments won't create the right laws without popular pressure, helping to generate that pressure is the only responsible choice, the only true CSR [Corporate Social Responsibility].

If it sounds too good to be true, that's cuz it is. The presentation, which followed the release of the free McMarketplace video game, is reportedly the work of Yes Men-like art/activist consortium RTMark. As far as I can tell, the actual McDonald's has not yet responded publicly to the presentation.

Download the Powerpoint presentation here. [posted by Paul Schmelzer on Eyeteeth: A Journal of Incisive Ideas]

A project in a similar concept to RGB Player is spinCycle from Spencer Kiser (an NYU ITP student).

As the turntable rotates, a camera reads the fluorescent tinted plexiglass (red, yellow and blue). The camera acts as the input detection, picking up the colours and positions of the pucks, but also as the visual feedback for the audience (displayed behind the performer). The speed of the turntable can be adjusted, as well as which colours are being detected. Whilst the input remains the same, experiments in using it as a drum machine and granular synthesis have been tried by Spencer.

Originally posted on Pixelsumo by chris

OPERATION ATROPOS is a documentary about interrogation and POW resistance training. Director Coco Fusco worked with retired US Army interrogators who subjected her group of women student to immersive simulations of POW experiences in order to show them what hostile interrogations can be like and how members of the US military are taught to resist them. The group of interrogators is called Team Delta, and they regularly offer intensive courses that they call "Authentic Military Experiences" to civilians. The documentary includes interviews with the interrogators that shed light on how they read personalities, evaluate an interrogatee's reliability, and use the imposition of physical and mental stress strategically. More fundamentally, however, the film shows how interrogators rationalize what they do and how they imagine both themselves and their enemies.

Operarion Atropos will open at Elastic Space on 13 June 6-9 pm. The exhibition runs from 17 June to 30 July open 1-6 Saturday and Sunday and by appointment; 22 Parfett St. London, E1 1JR.

Coco Fusco, born and based in New York is a interdisciplinary artist and writer and is one of the most significant and influential performance and video-artists (also an articulate and outspoken theoretician, as well as an active curator). She deals with issues such as globalisation, gender-specific conflicts, cultural colonisation and intercultural theory and practice. Her work is an ongoing reflection on the conditions of (women's) bodies in globalising and technologically imbued environments.

She has performed, lectured, exhibited and curated around the world since 1988. She is the author of English is Broken Here (The New Press,1995), The Bodies That Were Not Ours and Other Writings (Routledge/inIVA, 2001) and the editor of Corpus Delecti: Performance Art of the Americas (Routledge, 1999) and Only Skin Deep: Changing Visions of the American Self (Abrams ...

Next week, Barcelona will host the 13th annual Sonar festival, an ambitious series of events, performances, screenings, exhibitions, and conferences that speak to a wide audience and draw an international crowd. As its name might imply, Sonar is best known for merging sound with other contemporary arts, and it particularly highlights new media. Taking place over just three days (15-17 June, this year), the program tends to emphasize performance, time-based media, and other duration-specific projects. That said, a number of installations will occupy venues throughout the city, contributing to Sonar's multiple personalities as a world-class electronic music festival, an inspired film festival, and a major international exhibition platform. Events are separated into day and night forays, which is a perfect way to experience so much stimulation, in this late-night city. - Marisa Olson

An evening of live sight & sound from Mixel Pixel and Yip-Yip as they perform alongside, or rather, inside their various video creations.

Hailing from the murky swamps of Florida, spaced invaders Yip-Yip (http://www.yip-yip.com) will muck it up with their alien freak beats. Prepare to be annihilated by these tetris terminator twins!

Homegrown New Yorkers Mixel Pixel (http://www.mixelpixel.com) promise to pop-sate you with live accompaniment to their animated music videos, made by Mixel Pixel's own Rob Corradetti, as well as other stars such as Noah Lyon, Devin Clark, Papperad, and Ricard Rivera.

LIMITED SEATING! WILL SELL OUT! RESERVE A SPACE TODAY AT HTTP://WWW.MONKEYTOWNHQ.COM