In their recent online works they have explored how users can engage and effect a web-based ecology, changing quantities and properties for others. Interested in building environments facilitating dynamic audience engagement. Working with net communities they have further explored concepts of ecology where users engaging with the work are able to influence its direction. This model is closely linked with notions of positive and negative feedback used in artificial intelligence where the work's community of users have a collective intelligence like that of an ants nest. boredomresearch is interested in developing projects that explore the aesthetic possibilities of dispersed audience participation.

boredomresearch have recently produced a series of works for a national touring solo exhibition theatre of restless automata, these systems are inspired by in-depth research into artificial-life and digital biology playing on our receptivity for life ... 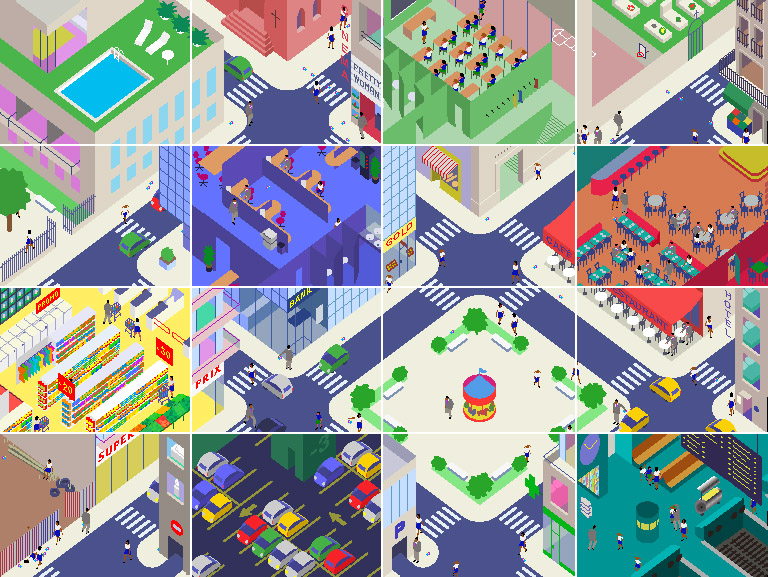 Vigilance 1.0 is a video surveillance game by Martin Le Chevallier. The player faces a series of screens allowing him to watch over many places in the same time : streets, supermarkets, parking lots, shops, apartment buildings, schools, etc. Denouncement is his aim. In a limited time (his work time), he has to point out the most important amount of infractions : robberies, pocket-pickings, burglaries, shop-lifts, breaches of the highway code, trash-abandoning, drug dealing, solicitation on a public place, procuring, drunkenness, sexual harassment, adultery, incest, pedophilia, zoophilia, necrophilia, etc. Each time the player catches one in the act, his points increase ; each time he defames, they lower. The game is downloadable. 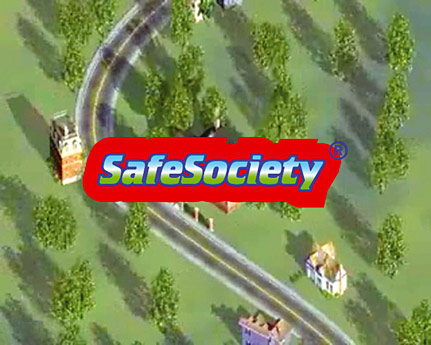 Safe Society is a 1 minute video by Martin Le Chevallier. Within an advertising time frame, the key concepts of a new security world are displayed. Low-fat butter, alcohol-free whiskey, non-lethal weapons. The video game images, which are often more dynamic and spectacular than their movie models mix daily and extraordinary events.

Virtual DJ is a prototype for a new type of club- and network-based performance, and can be used by anyone from absolute musical neophyte to the expert performer. Virtual DJ seeks to find a new mode of performance and editing: one that is spontaneous, capable of changing dramatically from one performance to another, and above all, seamless.

Produced by CANARIE, as a part of their ANAST program. Music, lighting design, interactive programming by Steve Gibson. Networking software by Chong Zhang and Conroy Badger of APR, Inc. Project Supervision Will Bauer of APR, Inc. VIRTUAL DJ is a part of THE MOVEABLE FEAST sponsored by CANARIE. Special thanks to The Interactive Institute, Stockholm for support.

unprecedented level, and scholars, policy makers, and the media alike are beginning to consider how games might offer insight into fundamental questions about human society. But in the midst of this opportunity for their ideas to be heard, it is game scholars who are selling games short. In their rush to highlight games' importance, they have tended toward an unsustainable exceptionalism, seeing games as fundamentally set apart from everyday life. This view casts gaming as a subset of play, and therefore - like play - as an activity that is inherently separable, safe, and pleasurable. Before we can confront why games are important, and make use of them to pursue the aims of policy and knowledge, we must rescue games from this framework and develop an understanding of them unburdened by the category of play, one that will both accord with the experience of games by players themselves, and bear the weight of the new questions being asked about them and about society. To that end, I offer here an understanding of games that eschews exceptionalist, normatively-loaded approaches in favor of one that stresses them as a characterized by process. In short, I argue for seeing games as domains of contrived contingency, capable of generating emergent practices and interpretations. This approach enables us to understand how games are, rather than set apart from everyday life, instead intimately connected with it. With this approach in place, I conclude by discussing two key recent developments in games, persistence and complex, implicit contingency, that together may ...

Originally posted on qotile/slocum by Pual

Has August left you with spare creative time on your hands? Why not consider investing it in a project that will last far past the Summer's end: a web hosting plan from Broadspire. Rhizome partnered with Broadspire, a west coast ISP provider, three years ago. The compaby offers a range of affordable plans including a Starter Plan at $65 per year for 350MB disk storage, 1GB data transfer a month, POP email, free setup and daily content back-ups. Rhizome earns essential revenue whenever supportive readers like you purchase a hosting plan through Broadspire and mention 'Rhizome.org' in your sign-up form. As a thank you, Rhizome features all the sites we host on a dedicated page in what is now a long list of artists, bloggers, designers, and other Rhizome supporters from all over the new media arts field. Take the plunge, and sign up for a hosting plan today. - Rhizome.org

The West Australian reports on an exhibition held at The Art Gallery of Western Australia featuring Mathew Gardiner's robotic flowers which react to text messages.

"Matthew Gardiner shows us a way forward from the clutches of paper with the graceful Oribotics Laboratory . Built on idea of phototropism in flowers, Gardiner has put together five robotic flowers that react to SMS messages from cities around the world, opening and closing as satellite beams bounce off their origami petals."

Has August left you with spare creative time on your hands? Why not consider investing it in a project that will last far past the Summer's end: a web hosting plan from Broadspire. Rhizome partnered with Broadspire, a west coast ISP provider, three years ago. The compaby offers a range of affordable plans including a Starter Plan at $65 per year for 350MB disk storage, 1GB data transfer a month, POP email, free setup and daily content back-ups. Rhizome earns essential revenue whenever supportive readers like you purchase a hosting plan through Broadspire and mention 'Rhizome.org' in your sign-up form. As a thank you, Rhizome features all the sites we host on a dedicated page in what is now a long list of artists, bloggers, designers, and other Rhizome supporters from all over the new media arts field. Take the plunge, and sign up for a hosting plan today. - Rhizome.org

Unlike many professions, there are a great number of people within the art world who could give a shit about the Internet. […] This sort of thing can create problems for artists who are making work in the medium because the people who understand it best are often the sixteen year nerds [sic] who spend 18 hours a day in front of a computer, as opposed to art world professionals who are responsible for the evaluation of art.

There are some new media artists who cross-over and make it look easy. Cory Arcangel and the McCoys come to mind. Arcangel succeeds by acting a bit like a ethnographer who travels into hacker culture and exports the bits that make sense to the art world. The McCoys succeed by addressing the older tradition of film and not letting themselves geek-out when addressing the art world.

MTAA recently had our worst fears realized when speaking to some traditional art world types about a new piece we’re developing with RSG. We were told bluntly that phrases like ‘peer-to-peer’ and ‘file-sharing’ are jargon and the art world doesn’t give a shit about them anyway. At first, I was defiant. These file-sharing networks are part of the subject of the piece, I told the art world pro. It’s like saying you don’t like apples so you don’t like paintings of apples. It’s just not your subject.

But then we realized, with some help from the art world pro (who’s remaining nameless but was very sharp and helpful), that we were failing to communicate ...

The pithy, haiku-like communique suggests the reflection and continuing dialogue that ISEA / Zero 1 has generated. (And the attendant illustrative video suggests that much can yet be done with this technology in the name of art and activism....)

The current iDC thread continues this discussion, critiquing the spirit of play which feels increasingly oriented towards middle-class consumer spectacle and the experience economy.

Questions posed in the iDC discussion: is psychogeography/locative media work simply R&D for a new generation of entertainment spectacle? Or, what are we actually trying to do with these ideas of "play" in urban space? Who gets to play? And what about the interactive cities in Iraq and Lebanon and elsewhere? Why didn't we address war, security, militarization and terrorism as aspects of the contemporary interactive city? For me, running around making the city into a sandbox, a playground or a playing field feels increasingly irrelevant and irresponsible.

Though the iDC thread focuses on the Interactive City events, another post-ISEA discussion, on empyre for the month of August, continues the dialogue of the Pacific Rim New Media summit and begins with the Raqs Media Collective presentation Pacific Parables. They pose broad questions that engage the questions above:

So much of the discourse about information technology and communication is about light, about transparency and knowledge that we forget that information is crucial for the manufacture of disinformation. We are thinking right now of the enormous energy that is being put into the media, electronic, online and print, all over the world, but also especially here, in the United States ...

Originally posted on networked_performance by michelle