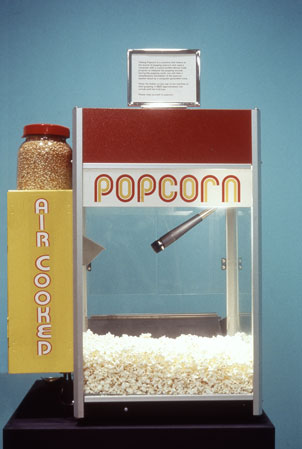 Â»Talking PopcornÂ« is a sound sculpture that evolved out of Nina Katchadourian’s interest in language, translation, and Morse Code. A microphone in the cabinet of the popcorn machine picks up sound of popping corn, and a computer hidden in the pedestal runs a custom written program that translates the popping sounds according to the patterns and dictates of Morse Code. A computer generated voice provides a simultaneous spoken translation.

Italian artists, Eva and Franco Mattes (a.k.a. 0100101110101101.ORG) have spent the last year wandering around the online world of Second Life, a virtual realm with its own architecture, real estate laws, currency, social norms, and sense of reality. Over time, they met avatars to which they felt drawn, at least in part because of their meeting of the criteria of a Western sense of 'beauty.' This experimentation led to '13 Most Beautiful Avatars,' a series of classicaly-formatted 'photo' portraits of the most intriguing avatars they've met on their adventures. Rhizome has partnered with Ars Virtua, an online Second Life gallery, to mount an exhibition of the portraits, as a part of the Time Shares online exhibition series co-presented by the New Museum of Contemporary Art. While the online show presents the images in their own spatial context, it is also a replication of the exhibition space in which the Matteses present the large, beautiful, richly-textured prints of these images, at Columbia University's Italian Academy (NY). In this context, a question arises as to which is the 'copy' and which is the original. Meanwhile, both the online and offline shows (open, respectively, until Dec 29 and Dec 19) are interesting in their own ways. Check out the Ars Virtua show and see for yourself. - Rhizome.org

My Alerting Infrastructure! project is now online at the Connected! show in Breda, The Netherlands! Watch the live stream here. Or open this link in VLC media player and watch it destroy the gallery in real-time. Above is a picture of the “giant” jackhammer/drill.

Originally posted on coin-operated by jonah


Over the past decade, Joshua Davis has established himself as one of the leading forces in the creative field. Using the computer in intuitive and innovative ways, Davis has set the standard for generations of artists to come.
It was no mere coincidence Davis was named one of the Ten Most Creative People by the IPPA (Internet Professional Publishers’ Association). He has received numerous prizes and has exhibited all over the globe. He’s also teaching as a professor at the School of Visual Arts in New York City.
The following fragment tells us a lot about his approach, methodology and his views on art.

"Among modern artists I conceptually identify with Jackson Pollock - not that I'm a particular fan of his visual style, but because he always identified himself as a painter, even though a lot of the time his brush never hit the canvas.

There's something in that disconnect - not using a brush or tool in traditional methods. Pollock might argue that it's the process of abstraction that's dynamic, not the end result, which in his case is a static painting.
In my own work, the end result is never static; by making room for as many anomalies as possible, every composition generated by the programs we write is unique to itself. I'll program the ‘brushes’, the ‘paints’, the ‘strokes’, the ‘rules’, and the ‘boundaries’. However, it is the software that creates the compositions - the programs draw themselves.

I am in a constant state of surprise and discovery, because the program may structure compositions ...

Picture left of Kawai! Little jumping penguins from artist Taka designed for your mobile screen -- thanks to FlashLite art.

"Cell phones have become a creative playground for designers, illustrators or animators: a platform for visual expression, though somehow small in size, writes Verena in an article for PingMag, The Tokyo based magazine about "design and making things".

The article is illustrated and links to the works of many Japanese artists. It's a rare treat and explains what an important market this is in Japan where the average high-school girl spends around $127 per month for mobile content.

"Up until now most people are used to take pictures with their mobile camera and use that as wallpaper. Thanks Adobe's Flashlite -- an application that does all sorts of animated magic and is now so common on Japanese gadgets -- artists take over this tiny screen and create their version of an animated wallpaper, screensaver or calendar. Or they even create designs for the menu trying to find new ways of customizing the mobile user interface."

Continue reading PingMag for more on other mobile artists and their projects.

3Cs is a working group of the Cultures of Economies Project supported by the University Program of Cultural Studies at the University of North Carolina at Chapel Hill.

3Cs formed in the spring of 2005 as a way to explore the uses of cartography and map-making to critically understand and intervene in the world we live in, especially the communities, ecologies and economies of our university.

3Cs is a network of people contributing their skills and knowledge to build a common project for a different/better University. As an open collective, 3Cs attempts to engage in non-hierarchical forms of decision-making, as well as participatory and action-oriented projects.

Terms like globalization, global networks, cyber infrastructures, mass immigration, global free trade policies leave us questioning how these issues pertain to us. Is it just something that happens "out there"? Mapping provides a way to make the connections between UNC and the "real world" visible.

Maps are more and more common in daily life. Through popular programs such as Google Maps and Pentagon mainframe cartographic systems, mapping is an increasingly important way for individuals and institutions to frame their roles and activities in the world. Mapping the university challenges existing notions of higher education institutions and our roles in them.

In referring to the work of Foucault and post-Foucaultian social theory as the "new cartographer" (along with the new archivist), Gilles Deleuze pointed to a mode of investigation and writing that sought, not to trace out representations of the real, but to construct mappings that refigure relations in ways that render alternative worlds. In this project, we begin with this understanding of new cartographies/new mappings, and then turn to the ways in which these new mappings are emerging within social movement, activist, and artist projects to rethink economic practices and institutions. In ...

December on -empyre- soft-skinned space : "Crusades and Art as Illegality and Provocation”

"The Crusades were the expansion of Europe, stretching its territories North and South, to colonize and spread the Christian Word, meanwhile conquering new markets, new source of raw material, new peoples and new lands. The historical metaphor oj the Crusades is still alive concerning and in presentday Middle East, both as a memory and in relation to contemporary conquests, as well as in the rhetoric of empire.

Today artists, writers and theorists merge in the world, document it and, instead of trying to conquer it, show passion and compassion, denounce, take part, engage themselves. Since Emile Zola wrote "J'Accuse" and Pablo Picasso painted "Guernica", a constant stream of
artists has been exerting their right to dissent and the right to
question power, the status quo and existing norms.

The walls in Palestine, Tijuana, Ceuta and Melilla are not only
symbolic; they build the shape of Fortress Europe, not only the
geographic, but the mythological Europe, the supposed cradle of Modernity. The Crusades were the clash and the confrontation.
Today's artists and intellectuals search its meaning, study its
effects. Films, photos, texts and installations talk about jails,
fences, workers with precarious jobs paperless immigrants, political
turmoil and mayhem. Fine Arts is today the arena of political
discussions and activist practices.

I've asked some friends and colleagues to join me during one month to
discuss our practices and our engagements, inspired by the above,
under the framework of -empyre- ...

The Experimental Television Center announces the next deadline for the Artists in Residency Program, December 15th, 2006, for residencies between February and June 30, 2007.

The Residency supports contemporary electronic media art projects. The studio workshop environment offers access to an image processing system, intensive individualized instruction and time for exploration and personal creative growth. Artists have an opportunity to study the processes and techniques of analog and digital imaging and to then use the system independently in the creation of new works. Participating artists have complete aesthetic and technical control over all aspects of the making process.

a live performance illustrating the digital mapping process normally occuring within a computer.

an ASCII version of Marcel Proust's novel A la Recherche du Temps Perdu is recoded into zeros & ones & then read by 2 performers alternately (one is reading the zeros, the other one the ones). the 3rd person is a CPU, as she interprets the zeros & ones with the aid of an ASCII allocation table, cuts out the corresponding letter from the prepared sheets & turns it over to Display, who sticks it onto the wall panel. after 8 hours of performance about 250 characters are processed.

Jena Osman’s 2002-2003 digital poem “The Periodic Table as Assembled by Dr. Zhivago, Oculist” has been offline for a while, but thanks to David Ayre’s application of galvanic force and use of leet skillz, it is back online. Do take a look at it and enjoy working the now-working piece.